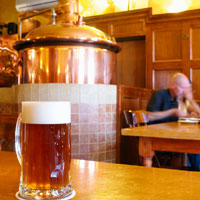 Czech nationals love their beer. So important is the amber-hued beverage in the Czech Republic that it’s been given the term of endearment, ‘liquid bread’. With a history going back over 1,000 years, beer has been brewed and enjoyed in the country for a respectable time indeed. Brits may be among the biggest tea drinkers in the world, but when it comes to beer the Czech nationals are out on top, guzzling a hefty 160 litres a year. Encouraging beer drinking further, beer is cheaper than bottled water. Another significant fact, the universally celebrated variety, Pilsner, is a brainchild of the Czech Republic.

It’s no surprise, then, that beer aficionados tend to favour Prague above all beer-worthy spots in the world. When embarking on a beer expedition in the city, one won’t be short of options- a wide plethora of drinking establishments line the quaint streets of Prague, and the number of brews available can seem almost overwhelming, despite the fact that mega brands have started to gain increasing control over the market. Covering a wide spectrum of varieties still, the most popular beer types in the Czech Republic include Kozel, Gambrinus, Pilsner Urquell, Radogast, Staropramen, Bernard and Budvar, as well as a slew of lesser known names.

When on the hunt for a beer or two, the two most famous beer haunts in town are U Zlatého tygra, situated near the Old Town Square; and U Cerného vola, located a hop and a skip away from the castle. If the length of the beer list is the most important criteria, steer your step to the Pivovarsky Klub or the Pivní Galerie- both establishments offer hundreds of beer types each.

Notable major breweries
In addition to the wide range of pubs and bars present in Prague and its surrounding areas, many breweries also welcome thirsty visitors. The Královsky Pivovar Krusovice (the Royal Brewery of Krusovice) is one of the most notable breweries in the Czech Republic. With several centuries behind it, the history of the brewery dates back to the 16th century. Not located within Prague itself, but still well worth the trek, the brewery is situated 50km away from the city and can be reached via the Prague- Karlovy Vary route. As a reward for having made the journey, most brewery tours end with a beer tasting session in the Meeting Room- a space that previously functioned as a malt house.

Next in line, Velkopopovicky Kozel is a Czech brewery established by Franz Ringhoffer in 1874. This Prague-based establishment is perhaps best known for its dark beer, but the brewery also produces pale and medium varieties. Using the symbol of a goat and having acquiring a tongue twister of a name, the company is recognisable as much for its logotype as for its name, that has been popularly shortened to Kozel to make life easier for its fans.

To continue the count of noteworthy breweries, one of the most famous is Pilsner Urquell – a beer brand that has grown considerably in the past few years, becoming increasingly ubiquitous on the international arena. In keeping with its high status, the brand’s brewery is of quite some calibre. Albeit being as modern and sophisticated as one would expect, the venture has retained some traditional means of making beer – a small team creates oak barrels on-site, in which the beer is fermented in traditional ways dating back » centuries. As well as brewing standard Pilsner Urquell, the company also produce varieties made in more traditional, labour-intensive ways. Another well-known contender is Staropramen brewery. Founded in 1869, it’s the second largest brewery in the Czech Republic.

The rise of the microbrewery
As a reaction against the homogenised market, which is putting the very beer heritage of the Czech Republic at risk, the rise of the microbrewery is gathering force. The market has seen a number of marginal beer types cropping up as a result, and beer aficionados- tourists and locals alike ardently endorse the movement. One such establishment is U Fleku, which serves home brewed beer as well as food of the traditional sort. Pivovarsky dum, meanwhile, is a microbrewery located in Nové Mesto. Alongside its offer of beers sourced nationally and internationally, it also develops many inventive brews of its own. Another strong contender on the indie beer scene is The Richter Brewery at the Pivovar u Bulovky pub, where a wide range of beverages brewed in-house are served up to eager drinkers looking to treat their taste buds to new flavours.

Tankovnas (tank pubs)
Being the world-renowned beer nation that it is, it would be surprising if the Czech republic didn’t push the boundaries. To do just that, the phenomenon of the tankovna, which translates to tank pub, is on the rise. Unlike pasteurised beer, the beverage found at a tankovna pub is unpasteurised. In Prague, entire establishments are dedicated to this form of beer making, and the movement continues apace. So what are the benefits of unpasteurised beer? Taste, mainly. Defined by a flavour that is decidedly rounder and more multi-faceted with obvious notes of hops and spices, fresh beer presents the drinker with a more rounded experience. On the other end of the scale, the pasteurisation process, that is used when brewing standard beer, involves advanced measures such the bacteria-busting sterilising process at high temperatures. Beneficial as the procedure is on some levels, it also comes with drawbacks, since there’s a risk that the beer will oxidise and thus acquire a taste that is anything but refreshing, along with a flat flavour.

Needless to say, beer that hasn’t been pasteurised faces a shorter shelf life. To avoid the doomed destiny of a limited sell by date, tankovna beer makers have come up with the nifty invention to contain the fresh beer in plastic sacks with a capacity of about ten hectolitres. The sacks are stored and served from large steel tubes or tanks and hold the recommended temperature that hovers around the 10oC mark. To serve, the beer is pressed out of the tanks via a high-pressure air compressor, and is thus kept well away from bacteria contamination. To mention only but a few tankovna pubs, Malostranska Pivnice, U Zlateho Tygra, Beograd, U Pinkasu and U Medvídku are all centrally located.