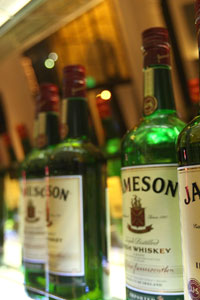 Although the Old Jameson Distillery is now an impressive museum, it is still home to the soul of Jameson whiskey.

Its heart however is very much alive at Midleton. This is the single distillery where Jameson, along with the Reserves family are now distilled. Each one of the Reserves are created and blended here, using only the limited stocks of whiskeys developed by the three Jameson Distillers.
The Jameson Reserves
The four Reserve whiskeys embody John Jameson’s unbroken heritage and pursuit of excellence and through their distilling style, careful blending and use of bourbon and oloroso casks for ageing, has made these whiskeys part of the very essence of the Irish Whiskey Renaissance.

Jameson 12 Year Old Special Reserve, with its full-bodied flavour, is like a friendly handshake welcoming you into the world of aged whiskeys. Exuding great character, its complex yet superbly mellow flavours of toasted wood, spice and sherry and its exquisite taste are a celebration of the enduring heritage of great Jameson whiskeys which began in 1780.

Jameson Gold Reserve is a creative blend of three whiskeys of advanced years, one of which is uniquely matured in virgin oak barrels. It’s the inspired choice of this virgin oak, coupled with the bourbon barrels and sherry casks, that account for the whiskey’s satisfying complexity and honey toasted sweetness.

A true original, Jameson 18 Year Old Limited Reserve is an exceptionally balanced whiskey and is the elder statesman of the Jameson Family. Its mellow, complex taste and lingering finale of wood, spice and toffee have been deftly created by the Master Blender; his hand-picked selection of no fewer than three exquisitely poised whiskeys serving as the light, shade and foreground used to craft this unique blend. Dutifully matured for no less than 18 years in a combination of bourbon and oloroso sherry casks, it’s given a final finish in fresh fill American bourbon barrels.

You’ve met the Jameson Family, now meet the Godfather of them all, Jameson Rarest Vintage Reserve. This initial expression of maturing rare pot still whiskey in traditional fortified wine casks is a triumph of the collaboration between the Jameson Masters; devotees to their craft whose skill and artistry have been richly rewarded.

All the whiskeys in this magnificent Reserve are of an advanced age and have an immense collage of flavours to impart from their time in the wood. The pick of older grain whiskeys were brought together with some rare and charismatic pot still whiskeys that had been matured in hand-picked second fill bourbon casks. These were carefully married with a rare pot still whiskey that was aged to a fantastic mellow sweetness in specially commissioned port pipes. The resulting union has a glorious, fruit rich character.