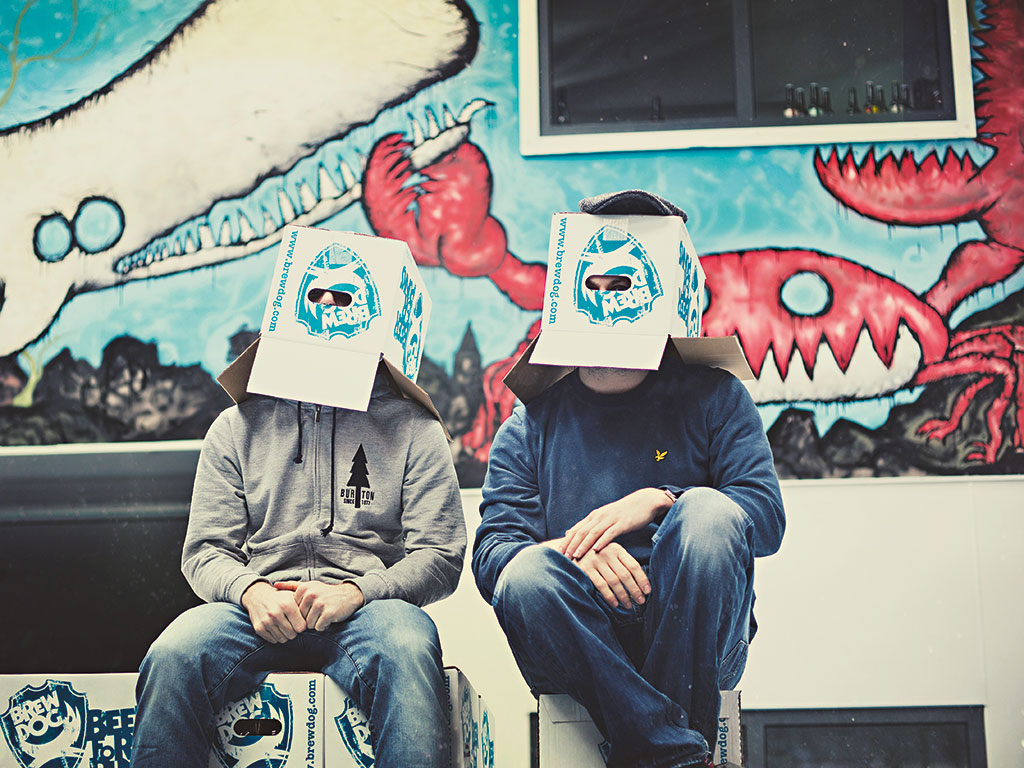 Brewdog co-founders James Watt and Martin Dickie. The company has become the UK's leading craft brewery, in spite of its controversial approach to marketing

“We’ll be throwing one helluva party.” So said BrewDog’s Co-Founder James Watt, speaking on the Scottish brewer’s customarily audacious attempts to broach the US market. Here, in a blog post titled Columbus calling, the hipster brewery expanded on its plans to build a North American home-away-from-home in Ohio, following a rollercoaster few years in which BrewDog has embraced a barrel-load of controversy and established itself as the UK’s leading craft brewery.

BrewDog’s rise to the top is an impressive one, as much for its methods as it is for its speed, and the brewer has provided no shortage of talking points along the way. Recognised ahead of the company’s leadership is its appetite for controversy, for which BrewDog is renowned not just in its native land, but also internationally. Aggressive and innovative in equal measure, the brewer’s antics feed into its anti-establishment image, which sees it routinely poking fun at the industry bigwigs.

The firm is renowned for its appetite for controversy – not just in its native land, but internationally

Controversy upon controversy
In 2013, the Scottish Advertising Standards Authority (ASA) took issue with the company’s online statement that it was a “post-punk apocalyptic motherf**ker of a brand”. The complaint was something of a precursor to BrewDog’s fractured relations with regulators, where often its go-to response was – and still is – something akin to “those ASA mother f**kers have no jurisdiction over us”. This refusal to take the authorities seriously stems back to its beginnings, particularly when in 2008 Watt and his Co-Founder Martin Dickie bent the truth in order to secure a loan. In doing so, BrewDog fulfilled outstanding Tesco orders and made good on a missed £20,000 payment.

In the years since, BrewDog has taken to brewing the strongest beer in the world (at a dizzying 32 percent), serving up Olympic-inspired beers (labelled Never Mind the Anabolics) and projecting naked images of its two founders onto the Houses of Parliament. More recently still, the boisterous brewer upset another industry body for once again breaching advertising standards: the Portman Group, whose job it is to regulate the British alcohol trade, ruled that labels on BrewDog’s Dead Pony Club bottles encouraged anti-social behaviour and rapid drinking – though the sentiment was not one shared by the accused, who subsequently apologised for “never giving a sh*t about anything the Portman Group has to say, and treating all of its statements with callous indifference and nonchalance”.

However, although stories like these are a big part of why BrewDog is so widely known, it’s the brand’s approach to funding – specifically crowdfunding – that has proven most effective in paving its path across the Atlantic.

Crowdfunding, crowd-pleasing
“Our international expansion plans have always been ambitious, but our intentions stateside are probably up there with some of the most ambitious, bombastic, exciting ventures we’ve ever embarked upon”, Watt said of the move. “America has one of the world’s most eclectic, energetic beer scenes imaginable, and we’re psyched to be pledging allegiance to the craft beer revolution in the USA. Planet BrewDog just gained a continent.”

Of the overall sum required to build an American headquarters, a great deal has come by way of BrewDog’s Equity for Punks programme; now in its fourth iteration. In only the first three weeks of the fundraising round, which began in May, the brewer managed to raise a record-breaking £5m – and celebrated by parachuting taxidermy ‘fat cats’ over London. Though unconventional, in that the approach shuns traditional forms of corporate finance in favour of the general public, the approach has proven successful so far – so much so in fact that the brewer is soon to set up shop overseas.

Speaking on the expansion and on the company’s successes so far, Watt said, “The BrewDog ethos will always remain the same, and our mission will still be to make other people as passionate about great craft beer as we are. We might start saying ‘y’all’ a bit more often, though.”

Looking at BrewDog’s ability to both bring consumers on board and crack the hyper competitive craft beer industry, it would appear that the company is well positioned to make good on a thriving US market – though not without incident. “The American craft beer scene is at least a decade ahead of the UK’s, and it’s a totally different beast”, according to Watt. “Our biggest opportunity is to be involved with one of the most eclectic, exciting and progressive beer industries in the world. We have taken a lot of influence from American craft beer since we started brewing, and now we’ll be able to fully immerse ourselves in that world. In terms of challenges, we have a great presence in [the US] having had three seasons of the TV show, Brew Dogs, air on Esquire network, but of course there will be work to be done in spreading word about BrewDog and getting our beer into people’s paws.”

The US market
According to the Brewer’s Association, volumes in the American craft beer market last year were up 18 percent, and its value a further 22 percent, which is especially impressive given that the industry has already been posting remarkable figures for some time now. According to global market research company Mintel, the increased brand competition has given rise to innovation beyond the core basis of yeast, hops, grain and water, citing pumpkin ales as an example. In fact, the intelligence agency’s Global Product Database shows that almost one in four US craft beer retail releases so far this year have been flavoured.

“Consumers’ taste preferences are driving the surge in the US craft beer market as consumers continue to seek more flavourful alternatives to domestic light beer”, says Marc Levit of Demeter Group. “Consumers are increasingly experimental, knowledgeable, and are having good experiences with craft beer and enjoy the discovery aspect of seeking new flavours and brands. The significant expansion of legacy craft breweries and proliferation of new craft breweries is in response to the permanent shift in consumer sentiment.”

A recent mergers and acquisitions drive, which began in 2011 with ABI’s first craft brewer procurement, means that there is also a great deal more growth potential for the market: Mintel’s Global Drinks Analyst Jonny Forsyth draws attention to the fact that SABMiller is yet to make a move for any American name. What’s more, according to Levit, competition will continue to increase as existing brewers ramp up production and expand onto other brewers’ ‘local’ territory. “New entrants will try to be even more innovative and disrupt status quo in certain markets”, he said. “More and better beer will be produced, but overall, industry competitiveness will increase and profitability may decrease.”

BrewDog and the US
Future profitability concerns notwithstanding, the market is ripe for the taking for any name that resonates with American consumers – though the question for BrewDog is whether it will connect with the US in much the same way it has done with the UK. “Achieving such significant growth from a base of almost zero will be difficult and unprecedented”, said Levit. “Today’s most popular and heralded brands (not always the same) took significant time and testing before they became both relevant to consumers and large in scale.” True, the brewer has been shipping to its trans-Atlantic cousin for some time now and the demand for the product is undoubtedly there – but there is still a mountain to climb before BrewDog is seen as anything close to a major American force.

“I think the fact that they are not American will be both an opportunity and a challenge for BrewDog”, said Forsyth. “For example, Mintel research shows that 44 percent of the key demographic of 25-34-year-old American beer drinkers think that craft beer only comes from the US. This reflects how the US is a world leader of craft beer, with brands in other countries – including BrewDog – being followers of what American craft beer trendsetters are doing, rather than pioneers (although this is now changing).” He continued, “Premium imported beers are doing very well in the US and I think BrewDog’s aggressive irreverence will play well with US craft beer drinkers. It will prove divisive, which is exactly what a small brand needs in the ultra-competitive US craft beer market. In fact, given the hyper brand competitiveness (there are almost 3,500 microbrewers and brewpubs in the US), it will do well precisely by standing out clearly against the rest.”

For the time being, BrewDog’s future is but a guessing game, though by playing to its strengths and staying true to this ‘aggressive irreverence’, the brewer could well find a place – and a profitable one at that – in the US market. “Thirst for our beer across the pond is so huge now that we can launch a brewery and know there will be plenty of eager craft beer fans ready and waiting to try our beer freshly brewed on the ground in America”, said Watt. One thing is for sure: the company is confident about its chances.