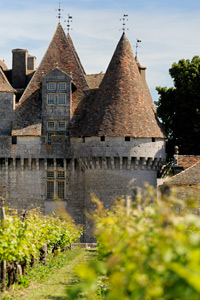 While many Bordeaux chateaux have been producing wine for centuries – and some estates in Saint Emilion and Graves claim evidence of winemaking going right back to Roman times – others are just starting out. To create a new estate alongside the 10,000 that exist in Bordeaux takes determination and passion, and show that there’s more going on in the world’s most traditional wine region than you might expect…

An indulgent wine full of coffee, chocolate and sweet black fruits, emphasised by being both unfiltered and unfined. Made of 60 percent Merlot and 40 percent Cabernet Franc, it is farmed organically and uses only natural yeasts to begin fermentation. In the cellars, everything is small-scale and Burgundian, with open-top barrels for breaking up the grape skins by hand, and all movement of the grapes and juice done solely by gravity. Husband-and-wife team Béatrice and Christophe Choisy created this 3.5ha estate in 2001, with celebrated wine consultant Michel Rolland instrumental to its success since launch.

The First Growths of Bordeaux are sought-after world over, and go for prices that make them unobtainable for most people. So to discover some vines that, for 30 years, were being used in Chateau Haut-Brion under a crop-share agreement, but are now being bottled under their own name, is pretty exciting. Owned by Dr Michel Allery, this tiny 1.5ha estate is farmed entirely organically, with horses ploughing the vines and grass cover between the rows encouraging water competition (and so making the roots head lower to where the nutrients are). The team is led by star consultant Stéphane Dérénencourt, and produces around 2,400 bottles a year. An unusual mix of 60 percent Cabernet Franc and 40 percent Cabernet Sauvignon, this is a firm, structured wine with delicate, violet-filled aromas.

One of the smallest appellations in Bordeaux, where land is expensive and highly sought after, it’s particularly unusual to find new estates in Pomerol. The estate is jointly owned by Alexandre de Malet Roquefort (of Chateau La Gaffelière in Saint Emilion), along with local businessman Jean-Luc Deloche, and two well known French footballers Matthieu Chalmé and Johan Micoud. As with most Pomerols, the fruit is firmly on centre stage, but there is also lovely elegance and balance; a sense of power builds on the palate but doesn’t overwhelm, and the final impression is of fresh blackcurrant leaf and pure red fruits. Unfortunately the first vintage of this new wine will only find its way onto the market in Spring or Summer 2010 (the 2008 vintage, with just 2,000 bottles).

The Gonet Champagne family, led by Frédéric and Charles-Henri, bought this estate in 1998, and began replanting vines on ground that had been without them for nearly seven decades. The first harvest was in 2001, and since then modern wine-making techniques have made things better and better. Cold soaking before fermentation ensures the fruit flavours stay fresh, and micro-oxygenation during winemaking keeps the tannins soft and fixes the lovely rich purple colour of the wine. With 65 percent Merlot and 35 percent Cabernet Sauvignon, there is good structure and ageing as you would expect from this part of Bordeaux, but with an exuberant kick to the finish.

This tiny half-hectare plot, lying between Chateau Margaux and Brane Cantenac in the glamorous Médoc appellation of Margaux, was sold in 2003 by the local village butcher, a man who for years had supplied the best cuts of meat to the illustrious properties that surrounded his shop. It was woodland at the time, with plantation rights for vines, and he decided to sell it on to a family instead of a big business which would simply have swallowed it up into its already huge estate. Jean-Pierre Marie, of cru bourgeois Chateau Cambon La Pelouse was the lucky recipient, buying it for a fraction of the cost of land already planted with vines. Their first harvest was 2006, with the resulting wine made available in 2008. With 50 percent Merlot and 50 percent Cabernet Sauvignon, this is a feminine take on Margaux, with warming blackberry and brambly autumn crumble flavours.

Since its first vintage in 2001, this wine from the lowly Bordeaux appellation regularly beats classified wines in blind tastings. A single-varietal, 100 percent Merlot, it comes from the highly talented Despagne family, led by Thibault Despagne and working with technical director Joël Elissalde (and consultant Michel Rolland). The vines are cropped low to around a third of the levels allowable in the appellation, and everything is done by hand, by gravity, and by design. Fermentation takes place in new oak barrels, each rotated at least once a day to ensure the tannins are soft and smooth. The result is a rich, beautifully polished wine, with intense red fruits that are easy to enjoy.