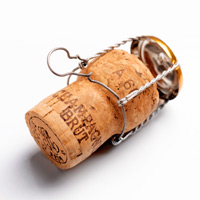 Champagne producers are facing something of a dilemma. On the one hand, they have spent years carefully repositioning their product to maintain the luxury associations, but democratise it sufficiently to keep sales rising. And it’s worked – 300 million bottles are bought every year, and sales of pink champagne have been rising 20 percent year on year since 2000 – with the UK being the world’s biggest importer.

But democracy is a funny thing for a luxury brand – just ask Burberry – and now that everyone is drinking champagne, suddenly the height of chic is a chilled glass of Prosecco. There are plenty of alternative sparklers full of character and complexity, if you just remember a few ground rules – namely always read the label.

There are several ways to make sparkling wine; a second fermentation in bottle, a second fermentation in tank, and the direct addition of carbonic gas. Not surprisingly, it’s the cheapest and easiest of these that give non-champagnes such a bad reputation. Any injection of carbonic gas can easily be seen – thick froths of bubbles when you first pour it, that dissipate to nothing within seconds. The magic word are methode traditionelle, metodo classico, methode champenoise… you want to keep the process in the bottle if at all possible.

And don’t neglect other European sparkling wines – Prosecco has been getting all the good press recently (Elton John even served it during his 2004 Oscar party), but German sekt can be wonderful, as can (with stricter quality control) Spanish cava. And of course Australia and California have long mastered the art of a good sparkling wine.

Ferrari Maximum Brut NV 75cl (£16.95)
Ferrari was founded in 1902 by Giulio Ferrari, but is now run by Bruno Lunelli and his four sons. It’s the most popular sparkling wine in Italy and the official drink served to heads of state at the Presidents’ Palace in Rome – and this was the one that made it onto the guest list of Elton John’s Foundation Party in 2004. It regularly tops polls when competing against Veuve Cliquot and Bollinger, and was my favourite wine of the tasting – not too fruity, with plenty of the biscuity flavours so beloved of the boys from Reims, and made from the classic combination of chardonnay and a touch of pinot noir.

Bisol Cartizze Prosecco di Valdobbiadene Brut 2005 (£15 approx)
Bisol prosecco was served at this year’s Venice Film Festival, from the Gucci party at the Palazzi Grasso to the Paul Allen party on board his private yacht – and it was Enzo Ferrari’s favourite tipple (that’s the car this time, not the wine). Prosecco refers both to the region and to the grape – and this is easily the most consistently impressive of its type. Bisol produces a range of excellent proseccos, but Cartizze is from the most famed of their vineyards; pure prosecco grape, and with plenty of lemon to give a lovely minerally character that cuts through the sweetness and delivers a crisp finish.

Grant Burge Sparkling Pinot Noir Chardonnay NV (£11.99)
The champagne combination of pinot noir, chardonnay and pinot meunier, from fruit grown in Barossa’s Eden Valley, about 150 metres higher than most of the area, and with a far higher rainfall, keeping that all important acidity in the base wine. Still; an Aussie wine is an Aussie wine, and I liked the almost chewy apricots that come through here and separate it from many European fizzes. A high degree of pinot noir (around 80%), and the wine spends almost two and a half years being carefully tended to, gathering the flavours of its lees, before being disgorged and made ready for sale.

Von Buhl’s Forster Pechstein Riesling Brut 2001 Pfalz (£12 approx)
Many German Sekts are tank fermented, meaning that – although enormously popular in their own country – they don’t enjoy a good reputation abroad. All of the Von Buhl sparkling wines are made using the traditional method, and it comes through clearly. This is a particularly good choice with food, and it’s not surprising to learn that their non-sparkling Rieslings won the German Riesling trophy in Decanter last year. The colour is very different to the other wines featured – a distinctive pale green, that sets the scene for tart apple flavours. A fine mousse that is so fizzy and light it explodes in your mouth much in the same way (no, really) that Krug does (although I can’t claim it has quite the same pedigree after the initial burst).

Camel Valley, Cornwall Pinot Noir Brut NV (£16.95 approx)
I had to include an English fizz here, as their reputation has exceeded all expectations in the past few years. Cornwall won the 2005 International Wine Challenge Gold Medal – which was both Britain’s only Gold and the only Gold world-wide for a sparkling wine from outside Champagne. This is a rosé sparkler, and it tastes like kir royale without the need to scrabble around in your drinks’ cabinet for a bottle of crème de cassis, or strawberry mousse without whipping it up in the food processor. And you have to like their reasoning on the name; ‘if they can call it Champagne, why can’t we call it Cornwall?’).

Chateau de Sours Reserve de Sours (£8 approx)
A new launch this year, with limited production for the moment, from Bordeaux’s most famous rosé producer… so yes, this only comes in pink. It’s a blend of merlot and cabernet sauvignon grapes, made in the traditional way with a second fermentation in bottle, and six months on its lees. Sebastian Lamothe, winemaker at Chateau de Sours, explained what gives them their edge; ‘Bordeaux clairet is traditionally run-off juice from the process of making red wine. But grapes that are perfectly mature for red wine can be lacking in freshness for a rosé. We pick our grapes earlier when they are destined for rosé, keeping acidity levels lively – which is, of course, even more important for a sparkling wine.’ Plenty of crushed raspberries make for a lively crowd pleaser at a pretty amazing price.

Nino Franco Prosecco di Valdobbiadene DOC Rustico (£10 approx)
Much drier than the others in their range, this is full of pears and white fruits, and is a good example of why Prosecco has become so popular – it’s just so easy to consume, and with only 11% alcohol, there’s very little to stop you opening the second bottle. It’s not complicated, so don’t look for intellectual appeal – just enjoy it.

Segura Viudas, Reserva Heredad NV (£12 approx)
Cava is a difficult sell, to be honest. We’ve all had too many examples that have left us with a ringing headache the next day, and after a while, you just stop hoping. This is from the Friexenet stable – which at least convinces you that they have the money and international expertise to make it happen, as they are the largest producers of methode traditionelle wines in the world. The grapes are Macabeo and Parrelada, and this cuvée ensures it uses only the best of each year’s crop – and then leaves it in contact with its lees for three years before bottling. Expect rich, nutty flavours, but with good levels of acidity. And expect to be surprised that it says Cava on the label.