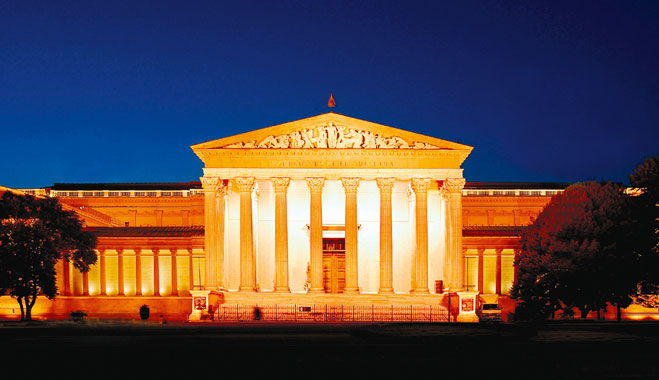 Budapest’s Museum of Fine Arts is a hidden treasure trove of incomparable masterpieces. Even though the museum has the most significant European art collection anywhere between Vienna and St Petersburg, it is still one of the ‘best kept secrets’ of the European museum map, the wealth of which never fails to impress first-time visitors.

The splendid collection, preserved by the capital on the Danube, includes masterpieces not only by Giorgione, Raphael, Titian, El Greco, Velázquez, Goya, Manet, Monet, Cézanne and Gauguin but by many other world-reknowned masters too. The importance of the collection, which is rich by any European comparison, is clearly demonstrated by the Budapest collection, having been successfully exhibited in recent years at Paris’ prestigious Louvre, the Pushkin Museum in Moscow, the Royal Academy in London and the National Art Center in Tokyo.

In 2007 the Museum of Fine Arts was listed among the 50 most visited museums in the world and in the last few years it has hosted such highly successful shows as El Greco, Velázquez, Goya; Van Gogh in Budapest; The Splendour of the Medici; Turner and Italy; and Botticelli to Titian which included Leonardo’s famous Lady with an Ermine. The success story continues and in autumn 2012 a large-scale Cézanne exhibition will be hosted in the museum, while in 2013 an exhibition will be opened in Budapest titled Caravaggio to Canaletto.

The freedom that ensued in the decades after the end of communism has not brought about a breakthrough for the museums of Central Europe.

Although many of the institutions in the eastern bloc had significant collections, they were unable to exploit their inherent opportunities and thus the contents remained hidden from the public of the western world.

The Museum of Fine Arts achieved a breakthrough at the end of the 2000s and in a short period of time joined the leading museums of Europe thanks to its successful modernisation programme and excellent professional ties. These days it is only natural that thousands of tickets are sold for blockbuster exhibitions and visitors have the opportunity to marvel at masterpieces on loan from the Museum of Fine Arts at big international exhibitions.

The permanent collection
The museum’s rich permanent collection forms the foundations upon which its success is built. The diversity of its holdings, its historical continuity and its wealth of masterpieces ensure it a worthy and prestigious place among the collections of Europe. The Museum of Fine Arts houses the treasures of universal art dating from the ancient world until modern days and its walls, which have stood for over a hundred years, preserve more than one hundred thousand works spanning from ancient Egypt to contemporary art.

The Italian and Spanish collection
The most noteworthy collection can be found in the Old Masters’ Gallery. The three thousand or so paintings preserved in the Old Masters’ Gallery showcase the development of European painting almost without a break from the thirteenth to the eighteenth century. The permanent exhibition of the gallery displays works from the great periods of Italian painting  from the Late Gothic to Rococo, and from Giotto to Giovanni Battista Tiepolo.

The abundance of material facilitates a wide selection; thus, the public are able to familiarise themselves with the history of the Italian painting schools through the masterpieces of the most illustrious painters. The Museum of Fine Arts has won outstanding recognition in Europe through the pieces of its Spanish collection. Having received perhaps the most praise of all the collections of the museum, the Spanish section provides a full and comprehensive insight into the history of Spanish painting through masterpieces by El Greco, Velázquez, Ribera, Murillo and Goya.

The Netherlands collection
Similar in size to the museum’s Italian collection, the Netherlands collection spans from the fifteenth to the eighteenth centuries. Following the history of Netherlands painting from its beginnings in the Middle Ages to the Baroque genres, the collection reflects the private taste of the middle-class through works by medieval and Renaissance masters to the greats of Flemish painting and the Dutch Baroque. The Department of Art after 1800 also preserves some 3,000 paintings and sculptures by European artists of the nineteenth and twentieth centuries.

The Modern collection
The backbone of the collection of nineteenth-century art is primarily provided by an almost uninterrupted cross-section of the development of French painting with Delacroix as its departure point. The department’s permanent exhibition showcases works by prominent French artists such as Delacroix, Courbet, Daubigny, Troyon and Millet, as well as the masters of Impressionism and Post-Impressionism including Pissarro, Manet, Monet, Renoir, Cézanne and Gauguin.

Contemporary art
The Museum of Fine Arts is not only a splendid venue for showcasing the treasures of the past but also an important centre of contemporary fine arts. In 2010 a successful exhibition – the first in the region – was staged of Fernando Botero’s works, and last year the City Park lake next to the museum was the venue for a contemporary exhibition of sculptures on water. This displayed works by 25 artists from 14 European Union countries created just for this occasion and attracting an audience of several hundred thousand. At the end of last year the Budapest public were able to view an exhibition by William Kentridge, who is regarded as one of the most recognised contemporary artists in the world and listed by Time magazine among the world’s 100 most influential people. Visitors were even able to meet the artist at the museum.

The Museum of Fine Arts is located on a one hundred-hectare site of the City Park, a unique cultural and recreational urban space. In the Museum’s vicinity is one of the oldest city zoos in the world, as well as the largest open-air skating rink in Central Europe, the enchanting Széchenyi Baths and the Grand Circus.