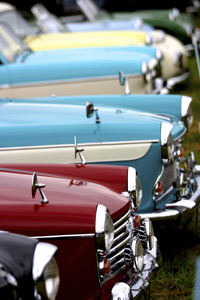 By most objective measures, modern cars are better than old ones. Look at how fast they go, how rarely they break, how much protection they give us and the technology inside them. It should be enough to render the stuff people were driving 20 years ago (let alone 40 or 60) obsolete. But it doesn’t. Classic cars continue to set hearts aflutter like few new models can. The question is, should that fluttering of the heart be allowed to develop into a reaching for the wallet? Owning a classic is a dream for many, but what’s the reality?

When we talk about classic cars, we’re referring to a huge range of different vehicles. If you thought there were a lot of new cars to choose from today, think of every car that’s ever been made (save for those that have rolled off production lines in the last couple of decades). That’s the breadth of the classic car world and that’s real choice.

Obviously, the entire scope of automotive production isn’t still trundling around our streets, even if it might seem that way when you’re trying to get home on a Friday evening. The majority of older models had their date with the crusher or rusted into oblivion long ago. What we’re left with are classic vehicles that have survived by chance or been preserved by besotted and diligent owners. It’s a kind of vehicular natural selection which has given the interesting, the quirky, the innovative and the beautiful a better chance of survival than the dross.

This process can create a stilted view of the motoring past. Not every man about town in swinging 60s London had an Aston Martin DB5 in the garage and his Italian equivalents weren’t screaming through Turin en masse in Ferrari 250 GTOs – but evocative vehicles like these have been nursed tenderly through the years in disproportionate numbers. Such cars grow in value and recognition, becoming emblems of their era while contemporaries afflicted by shoddy construction, shockingly unreliability or butt ugliness are deemed less worthy of preservation and fade from the memory. The result is a vision of our automotive yesteryears with a rosier tint than the reality – but that’s nostalgia for you.

Fortunately, budgets and ideas on what constitutes an iconic or beautiful car have always differed wildly and despite this whittling away of the unremarkable that inevitably takes place over time, the choice of classics today is huge.

You can part with peanuts for an old wreck that’s been slowly disintegrating in a garage for decades or pay through the nose for a mint, lovingly restored classic. And vice versa, depending on the model in question. A 1937 Bugatti Type 57S Atalante famously sold for over £3m after being discovered languishing in a dust-caked British barn that was left to relatives in an “eccentric” doctor’s will. By contrast, a pristine Morris Minor that one love-struck owner has lavished attention on since 1955 might struggle to top £3,000.

There’s a level for everyone in the classic car market, regardless of your financial means or commitment. There’s also tremendous potential to come spectacularly unstuck if you don’t enter transactions with your eyes open and, perhaps more importantly, buy for the right reasons.

New cars make notoriously terrible investments. “Drive a modern [car] out of the showroom and onto the street and you stand to lose 40 percent of its value instantly”, explains Simon Charlesworth of classic car website www.dep-o.co.uk. Every day a car stays out of the scrapyard, its depreciation plods onward at a decelerating pace. Eventually, maybe after 15 to 20 years, values bottom out and then, as dictated by the forces of supply and demand, cars can start to appreciate.

Clearly, the trick when buying a classic car as an investment is to clamber behind the wheel at the right moment in this cycle, ideally when the depreciation phase has run its course and the car is tantalisingly poised for a huge upward leap in value. It’s easier said than done. Charlesworth notes that it’s “always been the case that if you look after a classic then it will appreciate in value.” What’s much harder to know is when and by how much.

Historic Auto Group is a research company specialising in the vintage car market and its HAGI Top Index, which measures the prices of high-end classic models, shows major gains since the early 1980s, albeit with a few hiccups along the way. “It’s a small market but nevertheless successful,” says co-founder Hardy Singh Sohanpal, adding that it continues to have long term potential but “definitely isn’t a market for speculators.”

Similar notes of caution are often sounded when the subject of investing in classic cars crops up. One source of the concern can be traced back to the late 1980s, when the young and upwardly mobile fuelled a price boom by investing their gigantic bonuses in classics, notably including the Jaguar E-Type. The recession triggered a major crash that reduced the value of rare E-Types – that had been changing hands for six-figure sums – by more than half. Buyers in the market for a short-term profit had their fingers badly singed.

‘Invest for love’ seems to be the best advice for those trying to make money from classic cars. “The great thing about a car compared with other things that people purchase as an asset is that there’s an awful lot you can do with it,” explains Stewart Skilbeck of  Bonhams auctions. “It might enable you to have the greatest day of your life on a rally, or to meet a new business partner. It might be the greatest thing that happened to that person to own such a car.” If you use the car and love the car, fluctuations in value will seem less important.

There are all kinds of emotional reasons to choose a classic car. One is passion for the eras that some vintage models have come to reflect as powerfully as the music or fashions of the day. The E-Type Jaguar and the Mini are as evocative of the 1960s as the Beatles; the Cadillac Eldorado Seville screams 1950s Americana like Buddy Holly; and the 1980s wouldn’t be the 1980s without the filofax, the stock market crash, Audi’s Quattro and Porsche’s 911.
Classic car fans will also seek out the model their father drove in their youth or the star car from a favourite movie.

There are those with affinities for a particular manufacturer and buyers who choose a car for its unique history or pioneering design. Like so much about the classic car world, your own dream car is a matter of personal taste.

Talk of investments and dream cars suggests significant sums of money, but at the lower end of the scale lots of people run older models because they’re so affordable. The term ‘everyday classic’ might conjure up unfavourable images of being stranded at the roadside with a gently smoking Alfa Romeo Giulietta or spending late nights fruitlessly scouring the internet for a ’74 Ford Mustang headlight. The truth is that with depreciation taken out of the equation, cheap insurance, a surprisingly plentiful supply of parts and maintenance you can do yourself (with a little patience), some classics can prove highly cost-effective as everyday cars.

Painstaking research and thorough inspections are the order of the day when buying any classic car and even affordable models could easily have major skeletons lurking in the glove compartment. Get it right, however, and numerous benefits present themselves. There are environmental gains inherent in reusing something rather than perpetuating the modern cycle of dispose and replace. The warm camaraderie between classic car owners means you’ll never be short of someone to talk about tappets with and the fact that your car gets more favourable attention than your neighbour’s £100,000 Mercedes-Benz will be a constant source of pleasure. With proper care, you could even make money over a typical ownership period, a sensation that will be completely alien to most new car owners.

The classic car is more than something bought by men in the throes of a midlife crisis. For anyone with an inkling of fondness for the motorcar, it isn’t too hard to see why vintage models summon up the passion they do in all kinds of people.

Modern vehicles might be more advanced technologically but the four rubber-shod wheels, the internal combustion engine and the basic actions of driving haven’t altered too dramatically in 100 years. The world has changed though, leaving the classic car as a rare window back to a different place and time when it may have stood at the pinnacle of design, engineering, beauty or style. Classic car owners often see themselves as caretakers of their own piece of history and who knows, somewhere out there might well be a little piece of history with your name on it.