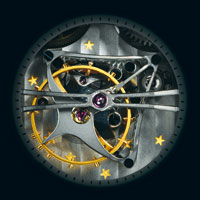 At the heart of the Vallee de Joux, a secluded haven of horological complication, Jaeger LeCoultre, has been cultivating a pioneering spirit for more than 175 years. Antoine LeCoultre, the man behind what was to become the Jaeger-LeCoultre brand, displayed a particularly inventive spirit. Following in his footsteps, today’s technicians and designers consistently explore new paths in developing masterpieces that will leave an indelible imprint on watchmaking history.

For the past 18 years, Jaeger-LeCoultre has opened its doors to around 2000 privileged visitors who have enjoyed personalised guided watchmaking tours. The Heritage Gallery, inaugurated in 2007, further enriches this discovery with information on the company’s heritage built up since its creation in 1833.

Watchmaking tours are now organised in countries all over the world and enable watch devotees to participate in some fascinating interactive highlights. These include watchmaking classes, lectures and meetings with industry professionals.

The adventure began in 1833, when self-taught watchmaker Antoine LeCoultre set up his own workshop following his invention of a watch pinion-cutting machine. This invention was soon followed by dozens of other tools, and then hundreds of patents. Each of these would later contribute to the ever growing reputation of Swiss watchmaking. The small workshop expanded so fast that it was soon nicknamed “la Grande Maison.”

For more than 175 years, Jaeger-LeCoultre has produced a success of world firsts, superlative accomplishments and legendary time pieces such as pocket-watches with ultra-thin or Grande Complication movements, the 101 watch, the Reverso, the Duoplan, the Memovox, or the perpetual Atmox clock. Today, over 1,000 people work within the manufacturing process and jointly master all the skills required to make it the most inventive brand in the watch-making industry.

Gem setting
The techniques of Haute Joaillerie are the secret behind Jaeger’s stunning creations in this field. Alongside time honoured skills, gem-setters have invented some unique techniques such as rock setting and snow setting, eloquently revealing their incomparable mastery, talent and creativity. A sublime expression of the jewellery-making art, snow setting consists of concealing the entire metal base beneath precious stones that are individually cut and adjusted to perfection. After months of research, Jaeger-LeCoultre succeeded in obtaining stones measuring just five-tenths of a millimetre and cut to feature 32 facets above and 24 below.

Movement decoration
Delicately hand-crafted bevelling, file drawing, snailing, circular-graining and polishing lend the finishing touches required to match the most complex mechanisms. Jeger-LeCoultre is also a master of materials (steel, nickel, silver titanium and aluminium), and even the most high-tech among them is treated to the same level of traditional decoration. Each part represents and aesthetic accomplishment in its own right and is accordingly designed, open-worked and decorated to become part of an exceptional work of art worthy of the beauty and complication it embodies.

Inside story
The Master Compressor Extreme LAB sweeps aside all standard conventions. Years of research and effort have been devoted to finding the technical solutions destined to solve an issue as old as watchmaking itself – simultaneously envisioned from a conceptual and technical angle, and from that of hand craftsmanship. It took a brand endowed with such a strong heritage as Jaeger-LeCoutre to create the Master Compressor Extreme LAB, boasting exceptional breakthrough features that foreshadow the watches of the future.
Revolutionary by its very nature, the lab has dispensed with the need for any lubricants in the movement. All watch parts have been entirely rethought to achieve the supreme horological quest to eliminate oil so as to ensure optimal operation. Traditional mechanical movements use oils or grease in varying degrees for parts with high translation and rotation speeds, or for parts subject to powerful pressures or stress. Unfortunately, the properties of such oils and grease deteriorate over time and the movement will likewise decline if these lubricants are not replaced in due time.

The research team at the Manufacture in Le Sentier is raising standards by embarking on uncharted territory; mechanical movement with zero lubrication. This research recently culminated in the Jaeger-LeCoultre Calibre 988C; the first mechanical movement in watchmaking history to operate accurately and reliably without lubricant.

To achieve this, several new materials have been created. These include Easium carbonitride; and extremely hard material with extraordinary tribological properties and therefore suited to making bearings operate without lubricant. This new technology has also negated the need to add jewel-based pallet stones. Instead, a synthetic material called black crystalline diamond has been used to considerably enhance operational properties.

Barrel grease has also disappeared in favour of a graphite powder that helps the bride to slide smoothly inside the drum when the mainspring has been wound beyond the maximum power reserve. Because graphite is atomically structured with stacked micro-platelets, it can retain its lubricating properties over time.

Building on the experience acquired through creating over 1,000 mechanical movements and registering more than 300 patents, along with the expertise of a full-fledged manufacture capable of creating the most innovative mechanisms, the Jaeger’s development team continues to push the limits of what is deemed possible in the field of traditional horology.

Unprecedented technologies, exceptional accuracy and reliability and new materials, Jaeger-Le Coutre is committed to pursuing these creative challenges for the future and has also provided lectures to educate on this theme.