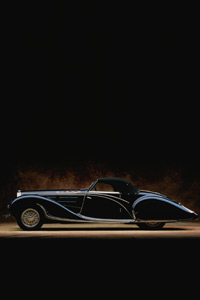 Excellence in design flowed in Ettore’s blood. His father, Carlo Bugatti, was a gifted and successful Art Nouveau furniture and jewellery designer, who had emigrated from Milan to Paris in 1904, principally to help further the careers of his two sons. At an early age Ettore began to display a talent for mechanics. When he was 17 he invented a motor-powered tricycle – a remarkable achievement given that at the time the motor industry was still taking its baby steps. This talent, coupled with an eye for elegance inherited from his father, ensured he went on to found one of the most recognisable luxury racing cars brands of the 20th century.

In the first five years of his career Ettore Bugatti had worked on the design of automobiles for a handful of manufacturers, but in 1909 he decided to go it alone. With the aid of a bank loan, Ettore established a factory in Molsheim – in the Alsace region of France – to produce a handful of automobiles and five aircraft engines.

From the outset, Bugatti’s cars were every bit a work of art as they were mechanical inventions. For instance, engine blocks were hand scraped to ensure that the surfaces were so flat that gaskets were not required for sealing, and safety wires threaded through almost every fastener in intricately laced patterns. As opposed to the industry norm of bolting the springs to the axle, Bugatti’s axles were made so that the spring passed though a carefully-crafted opening: a more elegant solution requiring fewer parts.

Commenting on his principal rival, Ettore famously described Bentley’s cars as “the world’s fastest lorries,” for their focus on durability. According to Bugatti, “weight was the enemy.”

A car is born
The first car from the Bugatti factory was launched in 1910, and in the same year Bugatti joined the racing circuit. Over the course of the next decade, Bugatti was to become a serious contender in the motor racing world. In 1924 the Bugatti Type 10 clinched the top four positions at its first race, and the 1924 Type 35 went on to be the most successful racing car of all time, with over 2,000 wins.

Unlike many businesses, Bugatti prospered as a result of the First World War, developing a number of aeroplane engines for both the American and French governments. Revenues from such contracts enabled the firm to expand the Molsheim operations, growing the staff base and increasing production. In racing circles, Bugatti continued to dominate almost every race event, often taking all three places on the podium.

Bugatti remained hugely successful until the depression of 1929. Since 1914, Ettore Bugatti had dreamed of building a truly legendary motor car, and in 1926 his dream was realised with the launch of the Royale model. Priced at $30,000 in 1926, the car’s price tag in modern terms would be approximately $900,000.

Intended exclusively for European royalty, the Royale unfortunately hit the market at the worst possible time, the great depression having taken a real stranglehold. Just six Royales were built between 1929 and 1933, and only three were sold – none of them to royalty.

A change in fortunes
Unfortunately, the 1930s didn’t herald a change of fortunes for Ettore Bugatti. Furthermore, his son, Jean, was killed in 1939 at the age of 30, while testing a Bugatti Type 57 near the Molsheim factory, and World War II ruined the factory in Molsheim, with the company losing control of the property. During the war, Bugatti began planning a new factory in Paris and designed a series of new cars. However, production of the new range was declined due to insufficient capital, and following Ettore Bugatti’s death in 1947 the company’s decline began to spiral.

Under Ettore’s son, Roland, the company attempted a comeback in the mid-1950s with the mid-engine design Type 251 racing car. Designed with help from renowned Alfa Romeo, Ferrari and Maserati designer Gioacchino Columbo, the car failed to meet performance expectations, and production was terminated in 1957.

In the 1960s, US car designer Virgil Exner designed a Bugatti as part of his ‘Revival Cars’ project. A show version of the last Bugatti Type 101 chassis car was built by Ghia and unveiled at the 1965 Turin Motor Show. However, funding could not be sourced and the project was abandoned.

Bugatti did, however, continue manufacturing aircraft parts, and in 1963 was sold to Hispano-Suiza – another car and aircraft manufacturer. Snecma took over in 1968, later acquiring Messier; the firms merged into Messier-Bugatti in 1977.

A new dawn
In the latest chapter of the Bugatti story, in 1998 Volkswagen acquired the legal name of Bugatti and began producing cars under the brand name. In 2000 Volkswagen founded Bugatti Automobiles SAS and in 2005 introduced the most powerful road car ever seen, the Bugatti Veyron 16.4, a sixteen cylinder vehicle boasting just under 1,000bhp and a top speed of 253mph. Named after Pierre Veyron, the French racing driver who won the Le Mans in 1939 while racing for Bugatti, the car is capable of reaching 62mph in just 2.5 seconds. In today’s market a Bugatti Veyron 16.4 costs around $2.3m, excluding taxes.

Since the launch of the Veyron, Bugatti has worked separately from, but as a subsidiary of, Volkswagen. Its forthcoming project is the Bugatti Lydia, a road car that is planned to produce 1,175bhp and record a top speed of 280 mph. Named after Ettore’s wife, the car is expected to launch in 2012 and cost around $3m.