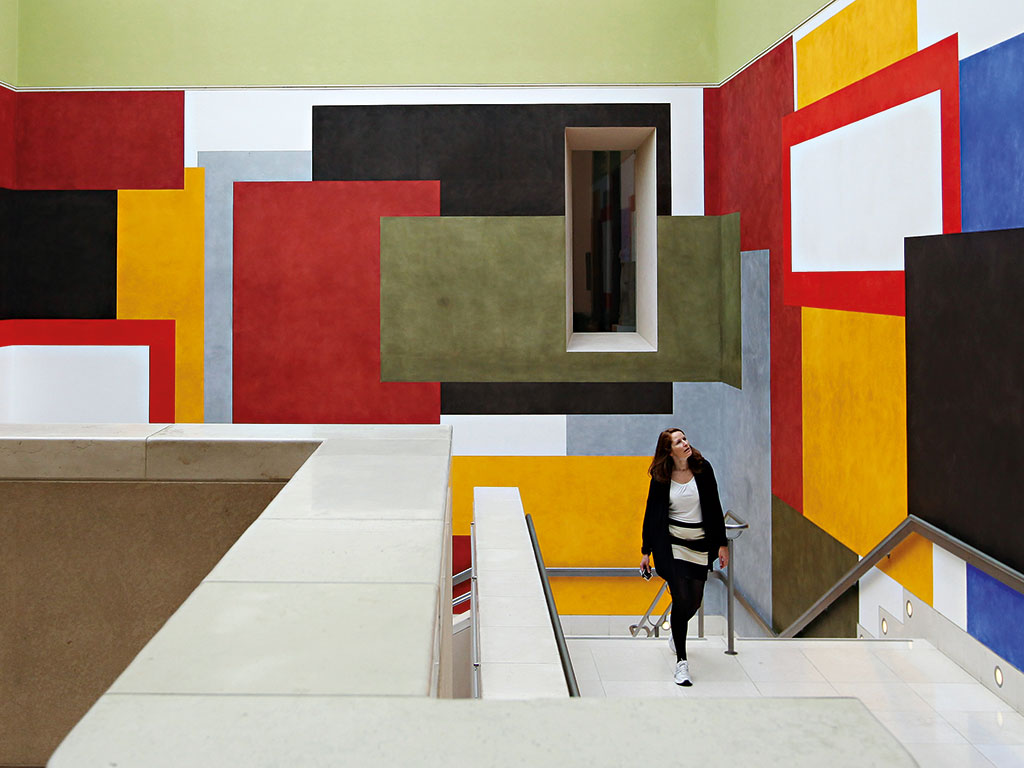 Drawing for Free Thinking 2011, by British artist David Tremlett, on display at the Tate Modern

The British art institution Tate caused a stir earlier this year when it publicised information showing that oil conglomerate BP had contributed £3.8m in sponsorship money in the period from 1990 to 2006. At 0.5 percent of the institution’s overall budget, the amount, at least in terms of size, was small. However, the figure ignited a fierce debate – not just in the UK, but globally – about whether BP’s ethical standards conflicted at all with Tate’s.

The oil major, whose part in the Deepwater Horizon oil spill has handed its reputation a serious knock, “fits in” with Tate’s ethical policy – that’s according to the institution itself: “[BP’s] support has been instrumental in helping Tate develop access to the Tate collection and to present changing displays of work by a wide range of artists in the national collection of British art”, according to Tate’s statement. Even so, campaigners have been quick to label the pair a poor fit.

Continuing until this day, the 25-year relationship between the two companies is among the longest of any cultural sponsorship partnerships worldwide, yet opponents insist that the contract represents little more than a punt on BP’s part to restore its downtrodden image: Platform, Art Not Oil, Liberate Tate and Shell Out Sounds are each resolutely opposed to Big Oil’s involvement on ethical grounds. The former wrote that “the sponsorship programmes of BP and Shell are means by which attention is distracted from their impacts on human rights, the environment and the global climate.”

Far from an isolated case, the story feeds into a wider debate about the responsibility of cultural and art institutions to uphold ethical values when it comes to sponsorship, and whether certain corporate partners are at odds with these values. “The issue for arts organisations of whether to accept sponsorship can be complex”, Clare Titley, Director of Philanthropy for Arts Council England, told Business Destinations. She went on to stress that a decision is reached often on a case-by-case basis: “For many years, the arts and cultural organisations of this country have benefited considerably from corporate sponsorship. This has not only helped organisations to diversify their income, but also in some cases [has presented] work which otherwise would not have been possible.”

Consumer trust
Where sport, cinema and theatre has long been open to major corporate sponsorship opportunities, art sponsorship is a relatively recent phenomenon, and one that garners far less attention in terms of studies into its value. Regardless, Performance Research figures show that over one half of those with an interest in art ‘almost always’ or ‘frequently’ buy into a brand sponsoring an art or cultural event, whereas only 36 percent of NFL fans do the same. Add into the mix the fact that almost half of respondents would put a » ‘higher’ trust in art sponsors, compared to 16 percent for sponsors of the Olympic Games, and it soon becomes clear that the brand points associated with art sponsorship number in the many.

Respondents also added that certain associations were a no-go when it came to art sponsorship, and – in contrast to sports – affiliations with alcohol and tobacco companies were seen as inappropriate. Going back to the case in point, it appears that these standards must also apply to fossil fuels, which again underlines the interpretation that arts institutions share a certain responsibility to act responsibly by the consumer. When asked about whether art institutions should uphold certain ethical standards, William Chipps, Senior Editor of the IEG Sponsorship Report (IEGSR), told Business Destinations, “Always. Art institutions should develop sponsorship guidelines that outline the types of companies/categories they can and cannot associate with. That will eliminate any confusion with evaluating potential partners.”

Aside from the ethical considerations, the size of the market is also significant (albeit stagnant), and figures cited in the IEGSR show that the North American art sponsorship market last year was worth $923m; one percent greater than the year previous. Occupying a four percent share of the overall market, art sponsorship is projected to grow another 1.6 percent in the coming year, which – when compared to sports, at 4.4 percent – is perhaps not growing as much as it could. “Spending on the arts continues to grow, but not as fast as other property segments”, said Chipps. “This is due primarily to the fact that many arts organisations are reluctant to offer more marketing-driven benefits for fear of overt commercialisation.”

No go, no show
Back in the UK, however, arts funding is facing the chop, and institutions are looking to the US for inspiration on how best to keep on a level footing. In doing so, corporate sponsorship is fast becoming part and parcel of the industry’s development, though it will likely be in North America and not the UK where concerns with regards to commercialisation will play out.

“Arts and culture in [the UK] thrives on a mixed funding model of earned income, public investment and donations. All these elements need to be in place for arts and culture to succeed”, according to Titley. “As there is less public funding available, income such as commercial, sponsorship and philanthropy is becoming increasingly important for arts organisations.” With growth in the arts sponsorship market slowing, pressure from activists could restrict a vital source of funding and stifle the sector entirely should their demands be met. True, the role of BP is relatively minor in the instance of Tate, though there are a great many other examples of institutions whose funding depends on companies from much the same sector.

Oil and gas companies are by far the most contested of corporate sponsors, though financial services have fallen foul of similar criticisms, due mostly to their part in the economic crisis. However, opposition to these figures could inflict major pains on the market, in that banks – particularly retail banks – are by far the most active category. Looking at IEG’s figures for 2013, banking was the most active category in the North American market, accounting for 18.1 percent of the total, as opposed to 3.3 percent in the automotive category, which is the next biggest contributor outside of financial services.

A quick glance at the region’s top corporate sponsors is proof that banking accounts for a fair portion of the market: Bank of America contributed 21 percent during 2013, whereas JPMorgan Chase and Wells Fargo, in second and third place, contributed 11 and 10 percent respectively. In fact, of the 12 biggest contributors to arts funding in North America, seven are banks, and studies show that retail banks are almost 20 times more likely to sponsor the arts than any other category.

Improved image
With dozens of corporate sponsors facing criticism, it begs the question: why are so many big names clamouring to get in on the action? Primarily, apart from a frosty reception, art sponsorship brings much in the way of benefits for participating businesses. “For the companies who sponsor arts and cultural organisations, there are a variety of benefits, such as raising their brand profile, accessing certain target markets, helping to deliver corporate social responsibility agendas by showing their commitment to the communities in which they operate”, according to Titley. “It can also provide professional development opportunities for their staff and offer access to events and experiences. Increasingly we are seeing much more collaborative sponsorship partnerships, which provide business benefits to both business and organisation.”

Reputational perks are by far the most talked about benefit tied to arts sponsorship, and those involved more-often-than-not enjoy a pick-me-up on this front merely by association. A strong presence at any exhibition or event means that a sponsor might be seen as a better corporate citizen – though only if its values ultimately align with that of the event. It’s when there’s a disconnect between the institution and the sponsor, as in the case of Tate and BP, that involvement can be interpreted sometimes as a cynical attempt to curry favour among the masses. Generally speaking, the remit of any museum or gallery is to educate visitors, so any differences between the two are certain to jar with consumers.

Changing public opinion
What differentiates art sponsorship from that of sports, for example, is a greater appreciation for the sponsor, with people having been known to adjust their perceptions should the sponsor’s intentions appear true. Unfortunately, the benefits are still little understood, and potential suitors are quick to overlook the value of arts sponsorship as the proposition is seldom seen as consumer centric. “In addition to the ‘warm and fuzzy benefits’ (supporting a beloved community institution, demonstrating support of the arts, etc.), arts organisations can offer partners more marketing-driven assets such as tickets, hospitality, behind-the-scenes experiences (a presentation by a curator, for example) and other benefits”, Chipps explained.

Too often, the property is seen on the one side as an opportunity to secure additional funds, and on the other as a playground to impress potential clients, with each at a loss as to how the two can better form a formidable marketing partnership. Only now, as the banks return to good health and the global recovery takes hold, are companies latching onto the opportunity that is art sponsorship – though it remains to be seen whether campaign groups will tone down their attack on sectors deemed guilty of unethical behaviour.

The art sponsorship market at present is often characterised by hostility and misunderstanding. What’s needed for the future is a more levelheaded look at the industry, where companies on the one hand uphold certain ethical standards, and visitors on the other acknowledge the importance of corporate backing in keeping the industry afloat.

Only then will the two reap the rewards of what could prove to be an extremely a fruitful relationship.