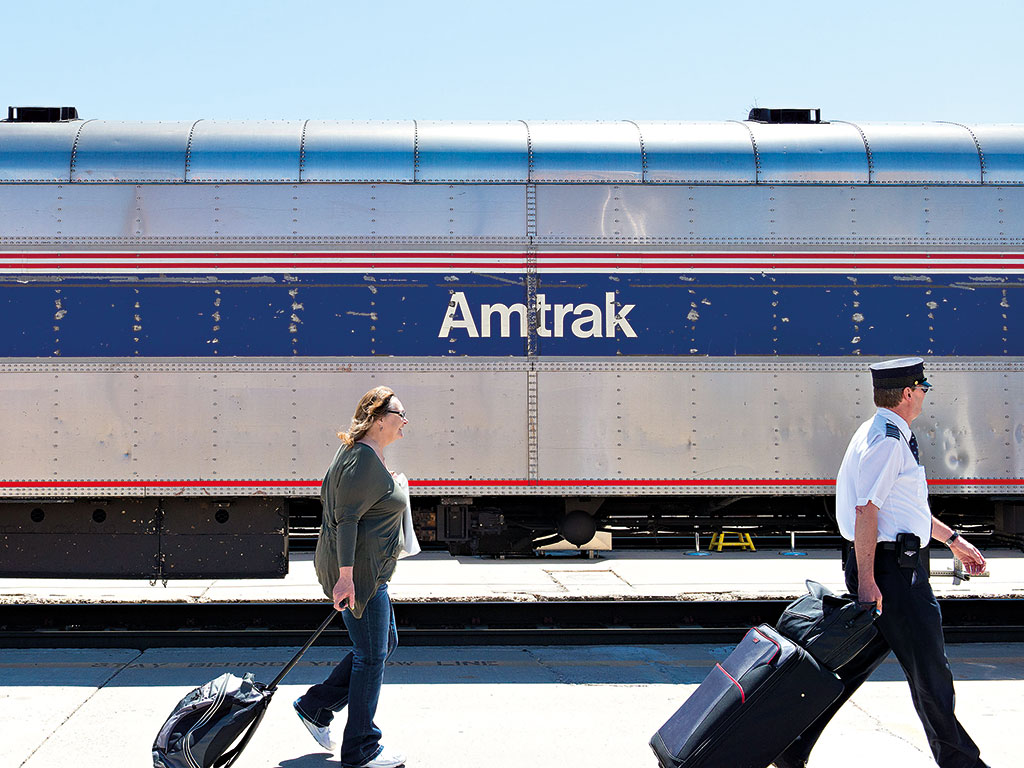 An Amtrak train in the US. As a mode of transport, trains are rapidly declining in popularity with Americans

In May 2015, an Amtrak Northeast Regional passenger train, transporting 238 passengers and five crew members at a speed of 102mph, derailed in Philadelphia, killing eight people and injuring another 200. While many politicians shared their condolences in the wake of the tragedy, US Vice President Joe Biden did so more emphatically than most: “Amtrak is like a second family to me”, he said. “For my entire career, I’ve made the trip from Wilmington to Washington and back. I’ve come to know the conductors, engineers, and other regulars – men and women riding home to kiss their kids goodnight – as we passed the flickering lights of each neighbourhood along the way.”

Biden – sometimes called ‘Amtrak Joe’ due to the regularity with which he praises the state-subsidised train company – went on to say that “the victims could have been any one of our parents, children, or someone from one of our communities”. Without doubting the sincerity of Biden’s words, the reality is that very few Americans are likely to ever be caught up in such a tragedy, as the vast majority of them simply never use train services. For decades now, passenger rail use has been steadily declining in the US, and although the country is criss-crossed with extensive railway tracks, the majority of these are used to carry freight, not passengers.

Although the country is criss-crossed with railway tracks, the majority of these are used to carry freight, not passengers

Westward-bound
Rail travel has played a decisive role in American history. As one writer for Vice magazine notes, passenger rail travel conjures up the “quaintly nostalgic… image of a Great Depression-era hobo carrying a bindle”. In the late 19th and early 20th centuries, the vast expanse of railways symbolised the open potential and pioneering-frontier ideal of the US.

Passenger rail was also instrumental in shaping the country as we know it now. The US has always had a transient population – as Richard Jensen, Research Professor of History at Montana State University Billings told Business Destinations, compared to Europe’s localism at the time, “the idea of relocating 200 or 400 miles became commonplace in the US after 1850, and if a family had done that once, it was easier do it again. The West Coast was the extreme case: it would take a week of travel to get to Los Angeles from the East Coast or the Midwest, but tens of thousands of families did it starting just as soon as the rail lines opened in the 1870s”. The westward expansion of Americans after the Civil War was reliant upon the use of rail and, as Jensen notes, “the railroads were decisive in shaping the 19th century expansion. Practically everything west of Chicago grew up because of rail connections.”

Driving to the suburbs
Yet railway use by passengers began to decline in the post-World War era. In the early 20th century, American roads had been precarious and underdeveloped, with many made up of little more than compacted dirt. This made travel – long distance or otherwise – by any means other than rail a burdensome task for most Americans. In the 1950s, however, President Eisenhower introduced the Federal-Aid Highway Act, thus creating a national inter-state highway system that totalled 46,000 miles, connecting the US in its entirety and making automobile travel far easier. The post-war era was also an era of growing prosperity, resulting in two related trends: the rise of the mass automobile, and the move to the suburbs – which in turn dealt a further blow to passenger rail use.

Mass-produced automobiles such as Henry Ford’s Model T – alongside growing prosperity and disposable incomes – turned Americans from passengers into drivers. Dr Allan M Zarembski, an expert in railroads at the University of Delaware, noted how the “rise of personal automobile”, facilitated by Federal-Aid Highway Act, made “auto travel fast, convenient and comfortable”. At the same time, automobiles became more suitable to new patterns of living, as more Americans moved to scattered and sprawling suburbs and it became less conducive to travel on foot.

As railway passengers disappeared, so too did the political will to maintain or invest in them. In the 1970s, freight trains were no longer mandated to include passenger cars, eventually resulting in the creation of Amtrak to replace these services for the remaining rail riders. The quasi-state company, however, has suffered from chronic underinvestment, with only delays and running problems to show for it. According to the National Journal, “Amtrak’s most punctual trains arrive on schedule 75 percent of the time” – hardly an appealing time-keeping record for commuters or holidaymakers.

Underfunding, lack of investment and a general lack of concern from US officials has been a persistent problem for American rail in recent years. “Hurricane Katrina washed out the tracks from New Orleans to Florida”, according to the National Journal. “The service was never restored, and the Gulf Coast has been without rail travel for nearly a decade now.”

West, again
Whether or not American rail can go through a revival is yet to be seen. However, it is perhaps fitting that one part of the contiguous US made accessible by rail – and with a history associated with it – could be the site of rail revival: Elon Musk of Tesla has grand plans to build a high-speed railway service from Los Angeles to San Francisco, which would, through the use of pressured tubes, propel passenger cars from one city to the other in around 30 minutes. However, this vision seems many years away. Additionally, California is working on its own, more conventional speed rail line on the LA-SF corridor, which is a more immediate prospect.

According to Zarembski, “the corridor concept is of real potential in the US since it avoids our very large intercity distances associated with coast to coast travel [3,000 miles] and makes travel times more manageable; along the European model”. Jensen, however, sees little prospect of a revival of trains in general, or the high-speed rail project in California. The high-speed train from LA to San Francisco “will go nowhere”, he said. “It is far too expensive, and requires a commute to the station.”

While he sees railways as having played a decisive role in US history, he believes that the future of transport relies on future technologies, not attempts to revive old ones. In Jensen’s view, “once self-driving cars become widely available in a decade or so, much of the tension around high-speed driving on crowded turnpikes will disappear. If the new technology works, the same stretch of turnpike or interstate will service more cars at higher speeds, with less travel time and far fewer accidents”. Just as in the past, Jensen said that “forthcoming technology still favours the automobile” – not its competitors, such as rail, which in the US has reached the end of the line.