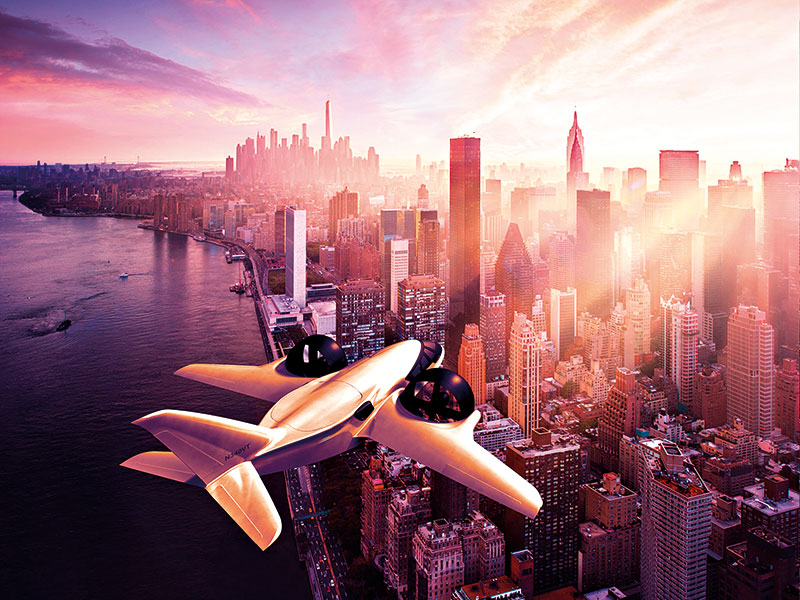 Vertical take off and landing (VTOL) aircraft have existed and been in operation for some time now, with the British Harrier Jump Jet and US-made V-22 Osprey among the most iconic iterations in this class of vehicles. Sadly, both are reserved for military purposes only, so the chances of a CEO acquiring one in order to get to his or her next business meeting on time are slim to none.

This leaves those that are strapped for time, but not for money, with a decision to make: buy a helicopter, which may not need a runway to take off or land, but is unable to traverse large distances, or purchase a private jet, which offers exactly the opposite.

But thanks to XTI Aircraft, a Denver-based aerospace start-up, a third option could be on its way: the TriFan 600, a six-seat business jet that has been designed to fly as fast, as high and as far as the majority of other private jets currently on the market, but that also possesses the added benefit of being able to take off and land vertically, just like a helicopter.

The company is in the process of striking up discussions with potential vendors, which will ultimately lead to the completion of a prototype

Start your engines
XTI believes that the aircraft, which is still in development, will revolutionise private air travel by greatly reducing total trip time and increasing overall convenience. Currently, no private business jet or helicopter in existence is capable of serving the needs of the executive traveller completely, because neither possesses the ability to transport passengers from point A to point B with the combination of speed, range and operational flexibility afforded by the TriFan 600.

“We could see that developing another traditional jet or helicopter in an already crowded market was not the answer”, a spokesperson for XTI Aircraft told Business Destinations. “But a new type of aircraft – with an entirely new combination of capabilities — was the key. With TriFan 600, executive travellers will have the ability to bypass highways and runways, lifting up from any helipad-sized paved surface and jetting out directly to their destination. They could potentially save hundreds of hours a year, achieve more, and avoid missing what’s important.”

The revolutionary aircraft is the brainchild of XTI’s founder and Chairman, David Brody, whose passion for aviation, science and technology has been crucial, not only in helping with the overall design of the TriFan 600, but also in the manner through which the project has been funded. From the get-go, Brody was a strong advocate of crowdfunding for the project, viewing “equity crowdfunding as a creative way to involve everyone as true stakeholders working together to pioneer this all-new way to fly”, Brody was quoted as saying on XTI’s website.

He added, “It’s a way to turn all of our supporters into potential stockholders, by providing the public [with] a once-in-a-lifetime chance to get in early on something truly revolutionary.”

Raising interest
So far, XTI has managed to raise more than $11m in non-binding indications of interest, according to its crowdfunding campaign page. Investment of this kind is almost as revolutionary as the aircraft itself, as up until recently only accredited investors (that is, individuals with an annual income exceeding $200,000 or possessing over $1m in assets) were permitted to invest in US start-ups.

That all changed in June 2015, when the final Regulation A+ rules under Title IV of the JOBS Act were approved by the Securities and Exchange Commission (SEC), allowing companies like XTI to raise up to $50m from accredited and non-accredited investors. This was not only good news for non-accredited investors, who for the longest time had been unable to invest in start-ups even if they possessed the necessary disposable income to do so, but it is also great news for companies eager to get their projects up and running. Such a change in protocol has opened up a whole new channel for attracting the capital that businesses require.

“All members of XTI’s management are shareholders in the company, so they are highly motivated and incentivised to increase the company’s value and create a path to liquidity and a market for all shareholders, including those who will invest if the company moves forward under this Regulation A+ crowdfunding financing”, the XTI Aircraft spokesperson explained. “Therefore, over the next two or three years, the company will be analysing and exploring various approaches to achieving liquidity for all shareholders, such as strategic relationships with publicly traded aircraft companies, and examining whether an initial public offering should be part of the company’s financing strategy within the next few years.”

XTI’s crowdfunding campaign has been extremely successful, especially considering that it has only been up and running for a couple of months. However, it isn’t the only channel that the company has sought investment from: the aerospace company has also managed to raise funds from venture capital, private equity and accredited investors. Furthermore, as this fundraising period continues, the company is in the process of striking up discussions with potential vendors, which will ultimately lead to the completion of a prototype.

Market takes off
For those who have already indicated an interest in the campaign, the chances of seeing a return on their investment are better now than in previous years, as the private aviation market is becoming far more accessible to corporate travellers, with low oil prices cutting the overall cost of travel.

“Since the recession of 2008, the UK’s private aviation industry has been improving”, Patrick Margetson-Rushmore, Chief Executive of London Executive Aviation (LEA), explained in an interview with the publishing house Raconteur earlier this year. “The market as a whole has never returned to pre-recession levels, but last year LEA recorded its strongest-ever financial and operational performance, reflecting stronger charter demand and growth in our aircraft management revenues, as well as an increase in flown hours, number of sectors and employee numbers.”

Not only is the private aviation market returning to its pre-recession glory, but with more and more aviation companies offering chartering services, allowing corporate travellers to hire aircraft as and when they require it rather than forcing them to do battle with scheduled commercial travel, the industry now offers the flexibility it needs in order to create sustainable growth over the coming years.

The TriFan 600 is likely to disrupt the market: according to the company, XTI expects the preliminary retail price for the aircraft to come in at around $10m to $12m, compared to the price tag of around $18m on equivalent models that are currently available. However, private aviation is not the only market that the company is targeting: XTI believes that the medical and tourism sectors could also potentially use their aircraft, because of the speed, flexibility and convenience that it offers.

The TriFan 600, as the name suggests, uses three ducted fans for take-off and landing. It then rotates two fans that are located on its wings to propel it forward, with a maximum cruise speed of 400mph and a range of up to 1,200 miles. For now, however, those looking to take a trip in the aircraft will have to wait, as an official launch date will only be announced once the company has received the necessary capital it needs.