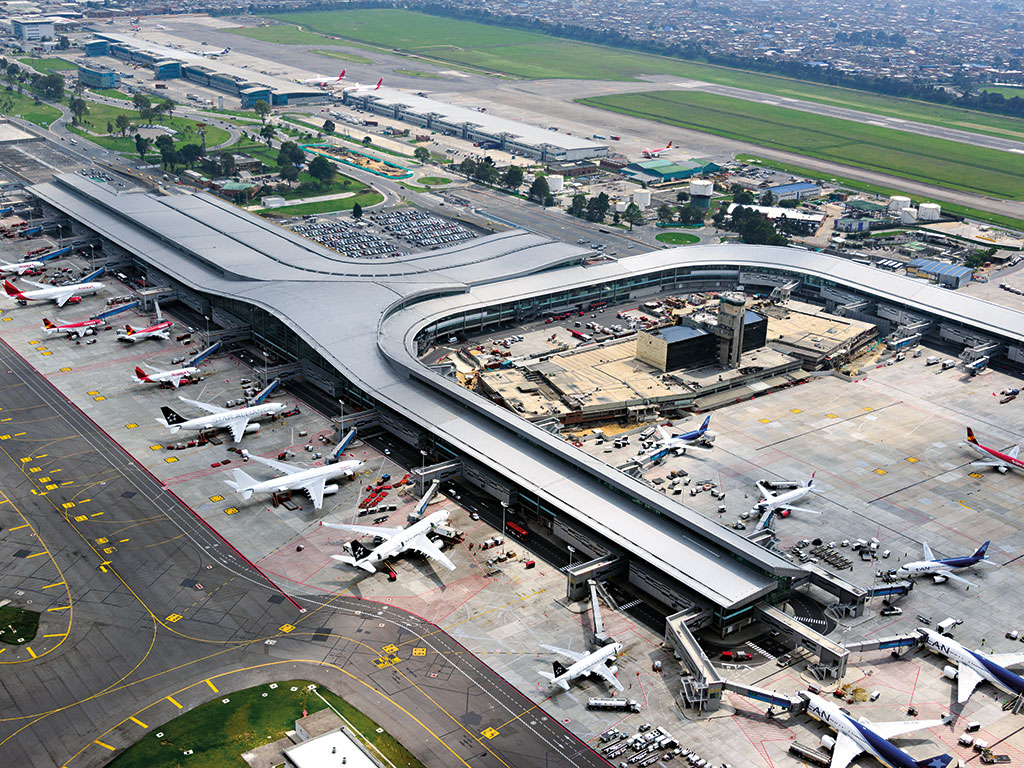 El Dorado International Airport, which is based in Colombia. After a $1.2bn investment, the airport is being completely renovated and modernised

Over the last eight years, an enormous amount of resources – including more than $1.2bn in financial investment – has been devoted to a mammoth project that will see the complete rebuild of the El Dorado International Airport in Colombia. The old terminal building, which was originally constructed 56 years ago, has been fully renewed and replaced with what is now considered to be one of the most modern and functional airports in Latin America.

The process of building the new El Dorado International Airport has been both a challenge of immense proportions and an incredible experience for the country, city, passengers and infrastructure developers alike. The overwhelming success of the new terminal building – as well as the remodelling of the airport’s cargo terminal, which mobilised over 600,000 tons of products in 2014 alone – has seen the airport being voted Best Airport, South America in the 2015 Business Destinations Travel Awards.

A bolder experience
In 2014, over 27 million passengers were transported through the airport, seeing a 13.5 percent average growth on the year previous, placing El Dorado as the third busiest airport in terms of passenger movement in the region. The ambitious expansion project is still currently underway, having already overcome a series of challenges that were faced during the opening and commissioning of both of the new terminals. The ultimate aim of the airport is to have the capacity to serve more than 40 million passengers a year by 2020.

This year, El Dorado was awarded a four-star score by Skytrax, making it one of only 23 airports in the world to be recognised at such an elite level. Based on the recognition from this high profile international organisation, the airport has found new motivation to further improve the service experienced by passengers. This has seen ambitious new initiatives being implemented across the airport, with cultural agendas in particular taking centre stage: in partnership with the Bogotá Philharmonic Orchestra, El Dorado International Airport has launched the Music for Travelling programme, which sees chamber music groups and symphonic orchestras performing a wide repertoire of Colombian and international music in the terminal building. This programme has five seasons, each three days long, over the course of the year.

The airport has also responded to suggestions that it could display more information about its country and natural heritage. By entering into a partnership with the National Natural Parks of Colombia, travellers have the opportunity to get to know more about the flora, fauna and local communities within the country’s National Natural Parks system through a series of photographic exhibitions and information points. These natural areas are recognised for holding over 10 percent of the world’s biodiversity, and are therefore known as the home of much of Colombia’s biological and cultural wealth. The framework of this arrangement also includes the promotion of ecotourism and support of local artisan communities through the airport’s ‘park shops’.

From start to finish
However, the airport’s innovation doesn’t stop there. In September 2016, El Dorado will be the venue for Bogota International Fashion Week, an event that will place the city at the centre of the fashion industry, with dozens of renowned national designers displaying their garments, leather goods and costume jewellery. Additionally, technology has become a key part of innovation at El Dorado, with a constantly evolving website, interactive units placed throughout the terminal and a state-of-the-art mobile app all on-going projects that will give travellers access to a different, closer and more comprehensive experience at the terminal.

As part of its understanding that the airport experience is an essential part of travelling for all passengers – whether flying for business or leisure, domestically or internationally – El Dorado has pledged to provide all visitors with a convenient, functional, comfortable and pleasant location in which to start or end their travels. Executive lounges and children’s play areas are two additional projects currently in progress, demonstrating the lengths to which the airport is willing to go in order to satisfy each and every customer.

The real El Dorado
The name ‘El Dorado’ is based on a local legend, which tells the story of an ancient city of gold that was founded and then hidden by the indigenous communities that lived in the Colombian Andes mountains. This legend is allegedly the reason why European conquerors recurrently climbed the Andes mountains in the middle ages, leading to the eventual discovery of the location where Bogotá currently sits. While the legend remains just that, the treasures are undoubtedly real: there is an extraordinary gold museum in downtown Bogotá, only 20 minutes away from El Dorado International Airport, which promises to uncover some of the mysteries of the myth.

The airport is currently focused on showing its visitors the ‘true El Dorado’. Colombians pride themselves on their friendliness and capacity for offering tremendous service, which is a virtue that – for El Dorado International Airport in particular – acts as the country’s real treasure. The airport itself was founded on the attitude of the Colombian people – in particular, the more than 500 workers who helped to build the terminal. The international community already recognises this quality: in March this year, the airport staff was named the Best Airport Staff in South America at the Skytrax World Airport Awards, an assessment that was based on staff efficiency, courtesy, language proficiency, attitude and knowledge. Upon evaluation, the staff at El Dorado International Airport scored far higher than the international standard.

Based on the key asset that is human capital, El Dorado has included in its institutional goals the construction of a strong service culture that will perfectly complement the on-going infrastructural redevelopments and improvements in passenger experience. Comfort, technology and entertainment all come together with kindness and impeccable service as the airport continues to improve upon and promote these unique characteristics.

New challenges
The main challenge of this initiative is to unite all stakeholders who are in pursuit of the same objective: air and land crews, immigration and security officials, public transport operators, vendors and service personnel and, in general, all persons who somehow help to ease passengers through the terminal must all be aligned within the airport’s unique service culture. El Dorado is aware that, by setting itself a goal of having the best airport service in Latin America, offering a first-rate experience is by far the most important factor in continuing to innovate and grow.

At the same time, the airport knows that setting itself this goal is the only way to guarantee that its millions of visitors will continue to feel that the real treasure of El Dorado lies within this magnificent infrastructure – and especially in the safe hands of its friendly and efficient team.