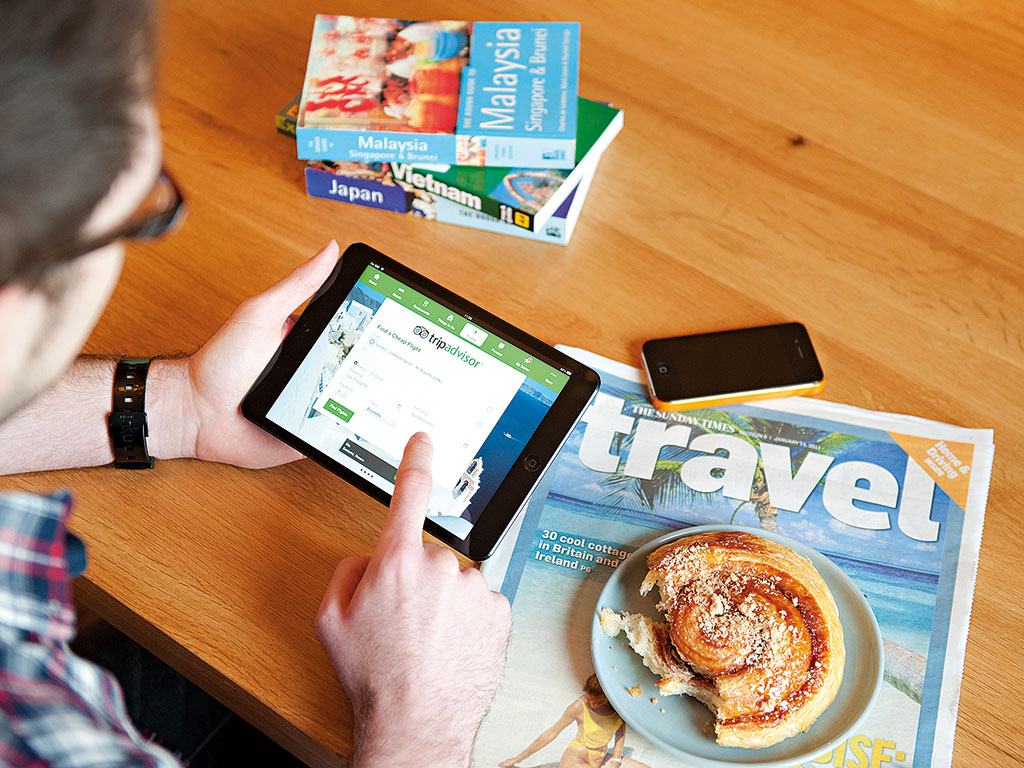 Sites like TripAdvisor allow customers to leave reviews on hotels and restaurants. However, some have been known to abuse the system

The internet, in all its glory, has given every individual a world stage. Any person, no matter who or where they are, can have their voice heard from Tivat to Timbuktu with the simple press of a button.

This revolution in information sharing has led to another within consumer culture: the now-indispensable online review. This particular consequence of the digital age has added a whole new dimension to the dynamic between customers and businesses.

For the first time in history, companies are at the mercy of immortalised feedback that is available for the whole world to see. Many organisations have embraced this evolution with gusto: some use it as an all-important key in their shared economy offerings, while others have created entire businesses off the back of it. Of course, there are those that miss the whole point of reviews altogether and a small minority that resort to falsification or penalisation. Being in its early stages, review culture is a phenomenon not without its flaws.

When seeking holiday accommodation, individuals can now base their choices on the commentary provided by those who have been there and done that

The customer is always right
Almost all business leaders subscribe to the philosophy of customer centricity. For centuries, word of mouth played the dominant role in this paradigm, but the internet has since set an entirely different stage for it.

“The review culture, fronted by the likes of TripAdvisor and integrated into most of the big e-commerce sites, such as Amazon and eBay, continues to give consumers a louder voice”, observed Patricia Hyde, Field Marketing Manager at Zendesk. “Review culture allows the consumer a safety net and reassurance that the product they’re buying is of good quality. If consumers are dissatisfied, they have the fall-back of complaining about the brand and, at the very least, denting the image the brand has with other potential consumers, if they’re unable to obtain a refund or replacement.”

It has become commonplace for an array of customer reviews to appear instantaneously for almost anything – from the calzone made by a local Italian restaurant to the latest iPhone by Apple, or even the manners of a shop assistant at Walmart. “Reviews are increasingly becoming an integral part of the customer journey. The latest figures from the BrightLocal Consumer Report state that 92 percent of buyers are making decisions based on the reviews they read online”, said Andrew Mabbutt, CEO of global ratings and reviews provider Feefo. “It all comes down to trust.”

As such, when seeking holiday accommodation, individuals can now base their choices on the commentary provided by those who have been there and done that. Reviews can help a consumer finalise their decision on a kitchen appliance, based not on the product’s merits as claimed by the manufacturer, but on those given by their peers. This multinational and incessant dialogue has taken away so much of the guesswork previously required in making a purchase that consumers now feel more confident than ever.

Social media further facilitates the ongoing communication between consumers and businesses. According to Hyde: “Social media is an accelerator as well as a platform in its own right. Indeed, many consumers are using social media as a first port of call to engage with customer service teams.” But while platforms such as Twitter and Facebook have helped to prompt this transformation, Hyde argued more is at play: “It’s really just part of a zeitgeist – a wider cultural shift to empower consumers to give feedback and opinion on brands and their products.”

All publicity is good publicity
Within seconds, a bad review can pass through the hands of thousands, even » millions of potential customers, thereby damning the company that offered a lousy product or service. Likewise, an excellent review can help elevate a company to incredible heights, which, predictably, has inspired some to falsify feedback in order to get ahead.

“A positive online rating can be key to boosting traffic to a business, with one caveat: the rating must be verified as genuine”, Mabbutt explained. “Google uses purchase-verified reviews, supplied by trusted review platforms, to generate their seller ratings. These display as stars in organic search listings and AdWords campaigns. Their studies suggest that this can increase the click-through rate to websites by as much as 17 percent, and lower the cost of PPC campaigns. Online ratings are the digital word of mouth: BrightLocal’s most recent survey found that 88 percent of consumers trust online ratings as much as personal recommendations, with 72 percent saying that a good online rating would make them trust a business more.”

of buyers make decisions based on online reviews

of consumers trust reviews as much as personal recommendations

Somewhat surprisingly, negative reviews have a positive role to play as well. According to the National Association of Retail Marketing (NARM), foul play is suspected by around 30 percent of online consumers if there are only positive reviews available. Moreover, they are likely to spend more time on a website if there are criticisms to read. NARM also found 95 percent of customers will return to a website if an issue has been resolved quickly.

“Customer feedback is a wealth of information that can be turned into actionable insights. Businesses should look to utilise a review platform with analytic and reporting facilities, allowing them to be alerted to any feedback, respond immediately and publicly, and map trends in what their customers are saying”, said Mabbutt.

Inside information
Amid this trend, review platforms have an increasingly important role to play by bridging the gap between customers and businesses in an objective space. Sites such as TripAdvisor catalogue, categorise and organise reviews, making it far easier and quicker for consumers to scour through the opinions of those both near and far in order to make a well-informed choice. And, perhaps even more importantly, they enhance reliability considerably because their own reputation and business is on the line.

Consequently, review platforms have become an integral part of consumerism, but they also provide invaluable information for companies. “Most platforms, including Feefo, give businesses the opportunity to respond to their customers’ feedback and use the platform as a brand reputation tool”, Mabbutt said. “Review platforms provide the opportunity for businesses to hear the voice of the customer – valuable data that can be converted into increased traffic, sales and business insights.”

There are some companies that take advantage of this relatively novel cultural phenomenon, either through the falsification of reviews or the chastisement of those who dare speak ill of a product or service. While they threaten the system and the foundation of trust that it rests upon, it is only a matter of time before such creases are ironed out through mechanisms such as intelligent algorithms and non-disparagement legislation.

When that happens, review culture will become practically infallible, allowing advice, support, critique and protection for the consumer to transpire without exception, while necessitating superior practices from corporations as well.

Online reviews have made the consumer experience all the better: they have increased transparency, alerted individuals of potential pitfalls, and given a space for grievances and praise to be aired. However, despite the many benefits we of the internet age enjoy, there is a degree of foul play prevalent in the system. There is a minority of distrustful companies that pay for good reviews and even some that penalise customers for any negative comments posted online.

Five stars from John Doe
Amazon is perhaps the worst casualty of false reviews, with the incidence seemingly growing alongside the expansion of the company. With its reputation at stake, in October last year the online goliath began legal action against 1,114 unidentified individuals for providing fake reviews on its US platform.

A lawsuit was filed against the nameless defendants for offering their services as paid reviewers to Amazon sellers on Fiverr, a website where users can buy and sell small tasks for as little as $5. To get to the bottom of the incident, which involved misleading comments and false ratings, Amazon went so far as to hire Fiverr members itself.

Sadly for Amazon, its problems went beyond that. The company filed a similar lawsuit in April 2015 against several websites for selling false reviews to “a very small minority of sellers and manufacturers”, according to the court complaint. “While small in number, these reviews threaten[ed] to undermine the trust that customers, and the vast majority of sellers and manufacturers, place in Amazon, thereby tarnishing Amazon’s brand.”

To tackle the growing issue, Amazon recently started using an in-house artificial intelligence system that elevates the prominence of verified reviews and uses them to determine a rating, as opposed to taking the average of all reviews – the tactic which enabled fake entries to influence rankings in the first place.

Unwanted honesty
In 2014, after staying at a small, independent hotel in Blackpool, a British couple posted a damning TripAdvisor review of the “rotten stinking hovel”. The pair paid the price for voicing their criticism when they found they had been charged £100 extra on their bill, which the BBC reported as being a product of the hotel’s “bad review policy”. In fact, the policy was even included in the terms and conditions on the booking form for the accommodation, warning of the retribution dished out for bad reviews posted on any website.

On the other side of the Atlantic, just months before, CNN reported that a New York hotel was charging $500 for any negative reviews given by a guest attending a wedding reception at the hotel. Again, the hotel was initially open with its policy, stating on its website that the fee would be deducted from the bride and groom’s deposit.

Such absurd penalties do not stop with accommodation. In 2008, when Utah resident John Palmer failed to receive the $20 worth of goods he had ordered on KlearGear, he complained to the company’s customer service department to no avail. Palmer and his wife reacted, justifiably, with a commentary of their experience on Ripoff Report, a US platform created for that very purpose. The result? KlearGear threatened Palmer with a $3,500 fine unless he removed the criticism. The snag, however, was Ripoff Report’s policy that forbad the complaint’s removal. This resulted in a massive penalty for Palmer, which went unpaid and ultimately left the couple with a bad credit report – something that can have huge repercussions for one’s financial future.

Surprisingly, there is little in the law to stops such penalties against complaints being made about a business. Fortunately, however, this could be set to change; in November 2015, TripAdvisor made a case to the US Senate to ban non-disparagement and anti-review clauses, with numerous senators offering their support to the campaign.