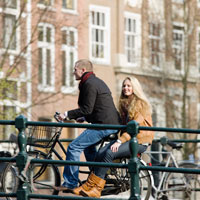 Stepping out on to the streets of Amsterdam, one almost expects to be hit by a zealous swarm of bikes whizzing ahead at blazing speed, giving no mercy to unsuspecting pedestrians.  But don’t rest assured you’re any safer in other cities across Europe. In a bid to save the planet, as well as to encourage residents to ramp up their exercise regime, governments across Europe are doing their best to encourage bike riding. Amsterdam, not surprisingly, is still the role model, and bike riding accounts for nearly half of all commuting in the city. Hot on the heels of Holland, Denmark doesn’t lag far behind, and the cycle docks of Copenhagen are famously well used. To further prove Denmark’s strong association with cycling, few Scandinavians’ went through their youth without embarking on at least one obligatory school trip to the hilly Danish island of Bornholm, riding bikes with one gear only.

Speaking of the cycling trends of eco-inclined Scandinavia, another strong contender is Sweden. The Stockholm city authority has spent quite some effort in upgrading and building new cycle lanes in the last decade, resulting in twice as many Stockholmers’  taking to the streets on their bikes today, compared to the figure in the 1990s. To cater to the ever-expanding number of bike riders, the cycle lane network in Stockholm has been extended from 675km to 760km over a ten year stretch, with further expansion in the works. Determined to kick Amsterdam off the throne of ‘King of European cycling destination’, the aim is to  make cycling as straightforward, convenient and safe as other means of transport. The efforts are paying off. ‘ It’s definitely noticeable that cycling is the most desirable way of commuting in Stockholm these days. People even cycle during the harshest winter months when temperatures can drop below -20. To make it possible in the first place, they’re of course properly geared out in high-tech performance clothing and winter tyres,’ notes local resident Anders Lindstrom, who commutes daily from a northern suburb in to central Stockholm.

To list yet another cycling happy locale, picturesque and pint-sized Prague is a city that lends itself perfectly to bike riding. Not only an viable option for residents with own two wheeled vehicles at their disposal,  Prague also offers sound  a bike scheme for tourists with companies such as City Bikes offering standard rental as well as guided city tours on bike.

Put up against Europe’s prime spots of cycling excellency, the UK didn’t stand a fighting chance in the past. Thankfully, change is in the air. Boris Johnson’s famous public bike hire scheme, that was launched in July 2010, is gathering momentum and is under significant expansion- by Spring 2012 the cycle hire area will extend eastwards as far as Bow, with about a hundred more docking points being added in central London. The self-confessed bike aficionado, Wendy Scott, who’s been getting around the capital for years exclusively on her bike, has noticed a significant increase in the number of cyclists descending on London’s streets: ‘ Everyone seems to cycle these days in London, and I often find myself stuck in severe cycle traffic jams. In some areas, such as Broadway Market in east London, bike parking spaces are treated like gold dust.’