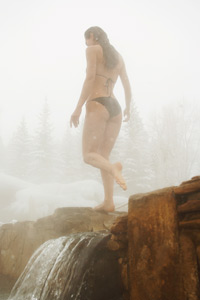 One of the criticisms levelled after the Boxing Day tsunami of 2004 struck south-east Asian shorelines was that the devastation could have been far less if mangroves had not previously been torn down to make way for development.

The World Conservation Union highlighted Sri Lanka, for instance, where many mangrove forests had been felled to make way for tourist resorts.Indeed, all Indian Ocean nations affected have systematically destroyed mangrove forests over the past 20 years, wiping out one of their most effective shields.Now governments in Malaysia, India, Sri Lanka, Indonesia and Thailand plan to spend millions of dollars replenishing what previously grew naturally.

Many tourist resorts are still quiet a year after the catastrophe and residents will wait to see if investors will rebuild.

Sustainable tourism, including sustainable hotels, is what is called for and, indeed, The International Tourism Partnership (ITP), the tourism programme of his International Business Leaders Forum (IBLF), had already sought to encourage all sectors of the global travel and tourism industry to pursue sustainable goals even before the tsunami increased consciousness of the issue.

The Business of Tourism Management, by John Beech and Simon Chadwick, published by Pearson Education, provides a succinct definition of sustainable tourism: it is economically, socio-culturally and environmentally sustainable. With sustainable tourism, socio-cultural and environmental impacts are neither permanent nor irreversible, it says.There is no shortage of willingness among the hotel industry, according to Lyndall de Marco, executive director of ITP.

But she says the difficulties hoteliers have is they do not own the land and the buildings. “…When the developers do the wrong thing it’s the operators that have to bear the consequences,” she says. “The hotel community has said it wants to do the right thing but it doesn’t make the decisions. The industry has put its hands up but can’t do anything if the developers are not interested.”

Thirty-eight of the world’s top banks committed themselves in June 2003 not to lend money to any business whose plans could impact negatively on the environment or community. They signed up to a voluntary set of guidelines, known as the Equator Principles, developed by the banks for managing social and environmental issues related to the financing of development projects. But she notes that 1,000 hotels are being built in China, for example, but by developers rather than operators – hence the need to convince the builders of the virtues of sustainability.

She says the problem is a lack of information and the perception that anyone who talks about sustainability is “a greenie”.

Arthur De Haast, global chief executive of Jones Lang LaSalle Hotels, says you just need to look at where the big development is now such as the Middle East and China which are paying little attention to sustainability issues.

When tourism forecasts are taken into account, the need for developers to take a sustainable approach is all the more urgent.

The World Tourism Organisation forecasts international arrivals will surpass 1.56 billion in 15 years requiring ever more hotel construction which, campaigners say, the more sustainable the better. Jamie Sweeting, senior director, travel and leisure at Conservation International’s Centre for Environmental Leadership in Business, says individual hotel companies have been focusing on issues of sustainability with regards to internal management practices for many years. “But with tourism expanding rapidly on a global scale, there is a need for companies to also focus their efforts on integrating responsible practices at the development stage to ensure they have a positive impact.”

Fourteen hoteliers signed up last year to the first guiding principles for sustainable hotel design and development laid out in Sustainable Hotel Siting, Design and Construction, a technical book which cost £100,000 to put together, published by Conservation International and IBLF. This was the first time such information had been collated between two covers to help encourage sustainable development throughout the industry.

Among blue-chip names to sign up to the principles were Hilton, Accor, Carlson, Four Seasons, InterContinental, Marriott, Rezidor SAS, TAJ Hotels Resorts and Palace, and Starwood Hotels & Resorts Worldwide. All levels of hotel development are tackled in the book. It includes project inception – finance, creating and briefing the project team. It covers pre-design, including site selection, community consultation and involvement and environmental impact assessment.

There is plenty of good-practice evidence to be found: Hilton International’s Scandic operation opened its first Nordic hotel in 1999 under the Nordic Swan eco-label. The chain just four years earlier introduced the concept of the environmental room – hotel rooms in which the materials are chosen with consideration for the environment.

Only two years before it had developed the environmental hotel where the entire construction was founded on environmentally-friendly principles.

Further examples of sustainable tourism can be seen all over the world:  Finnish outbound tour operator Aurinkomatkat-Suntours began integrating sustainability measures into its supply chain system in 2000. It developed sustainability criteria for its partner hotels with priority given to water management and energy saving. French group Accor formalised its commitment to sustainable development in 2002 with the appointment of John Du Monceau, a member of the management board, to take charge of overseeing the policy.

Its Ibis Porte de Clichy hotel, in Paris, inaugurated a photovoltaic facade in October 2004, transforming sunlight into heat without generating any electricity. It generates enough power to light about 25 percent of the hotel’s rooms. The facade screens the sunlight which reduces the need for air conditioning. Other hotels in the group have solar heating panels heating an average of 40 percent of the hot water used in the equipped properties.

Marriott Hotel Group’s Renaissance Reading Hotel uses a combined heat and power plant to supply most of the energy required. The installation of a new urinal water efficiency system achieved further reductions in water consumption. It operates a comprehensive recycling scheme and all general waste is sent to a waste recovery facility.Other examples of sustainable development be found all over the world, such as, the Golden Sands Resort and Spa, in Malta, the ski resort of Whitepod Villars, in Switzerland and Kasbah de Toubkal, in the High Atlas Mountains, Morocco.

Sustainable tourism is certainly on the march but, as campaigners point out, there is still a long way to go.