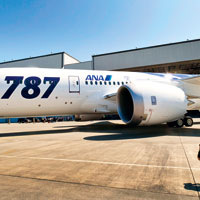 “The airplane is ready. ANA is ready. And, Boeing is ready.” No one believed Jim Albaugh, president and CEO of Boeing Commercial Airplanes, in August 2011. Why doubt him? After three years of delays, with numerous embarrassments arising along the way, the industry was convinced that this was just another empty promise.

When the Dreamliner project was first introduced to the world, Boeing scheduled the launch of the “revolutionary” commercial jet for the tail-end of 2007 – a launch date that was to see repeated postponements, each time due to reasons that only highlighted the project’s weaknesses and casted dark shadows of Boeing’s credibility. But it’s not only Boeing that has been badly affected by one of the most unfortunate spectacles in recent aviation history. The commercial airlines that have signed up to the Dreamliner project have suffered a great deal too. Before the project went off the rails, orders of nearly 900 planes flooded in. As the troubles mounted and the delay became longer and more serious, more and more cancellations came in, and the order book has reportedly taken a hammering.

Features
When introducing its new brainchild, Boeing promised that the plane would revolutionise the industry with a string of awe-inspiring features. The company’s target audience responded as well as Boeing had hoped, and commercial airlines from six of the world’s continents fell over themselves to get a slice of the state-of-the art pie, turning a blind eye to the $200m price tag. Before long, the Dreamliner had become the most popular model within the Boeing stable, racking up an unparalleled volume of sales and at record speed.

The elements that wowed the industry were many. Mostly, the invention received praise for its sustainable credentials, since it uses as much as 20 percent less fuel than other planes in the mid-size category. Making this possible, a composite material – a lightweight type of plastic– makes up 50 percent of the primary structure of the model, including the fuselage and wing. It’s this very aspect that makes the plane fuel-efficient. The plane also benefits from new engines from General Electric and Rolls-Royce, which also contribute to overall fuel efficiency improvements. Allegedly, these newly introduced engines represent a two-generation jump in technology. The way the Dreamliner has been built and designed has also furthered its green credentials, and new technologies have been developed to help Boeing and its suppliers meet particular efficiency targets. By manufacturing a one-piece fuselage section and, 1,500 aluminium sheets and 40,000-50,000 fasteners were successfully eliminated.

The plane measures 186 feet (57 metres) in length, with a wingspan of 197 feet (60 metres). It’s as tall as 56 feet (17 meters), and the vehicle is specifically conceived to fly long distances. Generally speaking, the Dreamliner is simpler in style than planes as we know them, having been stripped of gimmicks to offer increased functionality and efficiency. At the same time, the 787 displays an array of high-tech features such as “airplane health-monitoring systems” that allow the sophisticated vehicle to self-monitor its performance and report systems maintenance requirements to ground-based computer systems.
As would apply to any commercial airplane model, passenger comfort has to be taken into account. Among the features that may please air travellers are larger windows fitted with buttons allowing passengers to gradually darken their surroundings. The plane also boasts lower cabin altitude and cleaner air.

It’s arrived (finally)
Three years overdue and billions of dollars over budget, Boeing finally delivered the 787 Dreamliner to Japan’s All Nippon Airways (ANA). “We are rolling out the first delivery airplane, the first 787. That’s an amazing thing for those who have worked on the programme five, six, seven years, here at Boeing and our partners around the world,” said Scott Fancher, Boeing’s vice president and general manager of the 787 programme. Some would say a more modest launch speech would have been more appropriate, considering the public embarrassment the company has faced, and the fact that the delay has affected so many of its clients.

For ANA, Dreamliner’s most eager customer, it seems the wait was worth it. “As launch customer, we are delighted to be taking delivery of our first 787 Dreamliner. This aircraft will enable us to offer new standards of service and comfort to our passengers and will play an important role in our international expansion strategy as we seek to become Asia’s number one airline,” Shinichiro Ito, president and CEO of ANA Group, said.

It’s not surprising that ANA has stood by Boeing, even when the company plunged to its most desperate point with the project. The Japanese airline launched the 787 programme with a record-setting order of 50 airplanes in April 2004, and the final number reached 55. Taking an active role in the development of the plane, the airline has played a key role in guiding the design development of the Dreamliner. As such, ANA has become almost synonymous with the elusive plane, which explains why the Japanese player didn’t join its fellow airlines in choosing to opt-out of the never-ending Boeing saga.

Delay after delay
Since the summer of 2007, the timeslot the Dreamliner was originally meant to set out on its premiere outing, the project has been plagued with an assortment of disasters. One particularly media-friendly event was the onboard fire that occurred in November 2008 and brought to a halt crucial test flight proceedings for some time. Equally disastrous, further delays were caused by a 58-day machinists’ strike – action that certainly didn’t reflect well on Boeing. Coinciding with the uproar, Boeing also admitted that problems had arisen with the fasteners that hold the aircraft together. Apparently, a number of the crucial components had been incorrectly installed by suppliers on the four test jets. A string of additional hitches added to the postponements, mostly stemming from a shortage of parts and complications on the supplier side. As the pressure intensified, the US firm desperately tried to justify the sluggish progress of the project that seemed to stretch into eternity. “We now need to produce, install and test updated software and new electrical power distribution panels,” read one company statement; wording that would form thepersistent stream of announcements that were to follow.

Reputation in tatters
The delay in delivering the environmentally-friendly jet has made headlines all over the world, and there’s no doubt that the ongoing blunders have damaged Boeing’s reputation. Going forward, it’s also likely that the company will be under the microscope and ruthlessly scrutinised – no flaw will escape the attention of Dreamliner critics. Boeing, however, has chosen to look at the situation optimistically, and company spokespeople have said that they doubt the delay will affect Boeing’s 2010 full-year results. Painting a bleaker picture, each announcement indicating trouble at Boeing has seen the company’s share prices fluctuating, and the markets have followed the roller coaster ride closely.

In terms of customer loyalty, as much as the airlines loved the sound of the glamorous new model, they could only keep their patience up to a point. Since 2009, a mere 13 new orders have been placed while the cancellations have continued to increase. Recognising that there would be little point in trying to keep up appearances, Boeing recently admitted that some airlines have opted out of the 787 in favour of the more reliable models, the 777 or the 767. The biggest blow to Boeing, however, is the fact that arch rival Airbus is capitalising on its failures, despite that fact that it’s had its fair share of troubles, too. Still, Airbus excelled greatly in 2010 and reported more plane orders and deliveries than its troubled rival.

Controversially, the company has launched an assembly plant in South Carolina, something that has caused furore. According to Boeing’s machinist union, the company only wishes to establish the plant in South Carolina instead of keeping it in Washington so as to take advantage of the former’s weaker labour laws. The accusation is supported by the National Labor Relations Board, which has threatened to shut down the plant. The Dreamliner saga, it seems, is a never-ending story.