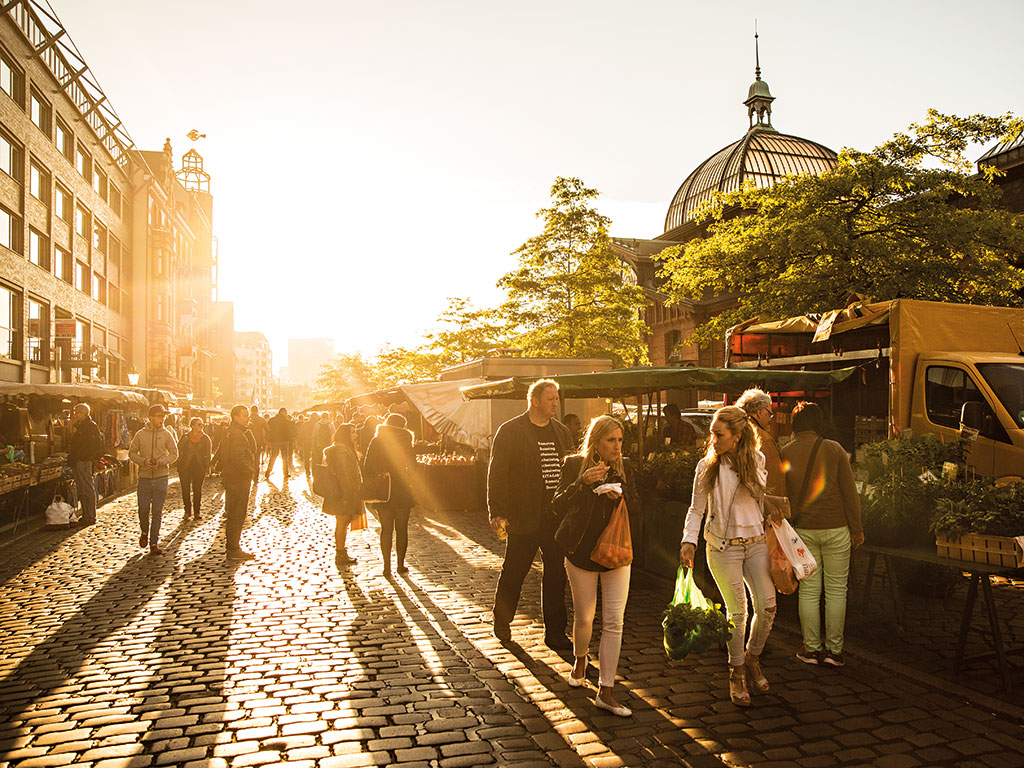 Jordaan, Amsterdam, the Netherlands. The city is just one of many European destinations Americans are keen to visit as the dollar strengthens against the euro

For as long as there have been Americans, there has been American tourism in Europe. While people once flocked westward across the Atlantic in search of a better life in the New World, the ancestors of those making the trip had previously flowed in the opposite direction to observe a different life in the Old World. According to historian Christopher Endy, by 1885 over 100,000 people a year were already travelling from the US to Europe for the purpose of tourism.

The Hôtel George V in Paris became a popular destination for wealthy American tourists in the inter-war years and, before it became a popular destination for intra-European tourism (and while bitter feelings towards Franco’s regime still lingered in Europe), Americans were flocking to Spain in the years after the Second World War, recounts Endy in his book, Cold War Holidays. Lured by a perception of Europe as a historic place and a wish to visit the homeland of distant ancestors and relatives, Americans have continued to visit ever since. In 2013 alone, over 11 million US citizens travelled to Europe, more than any other region outside of North America, with the Caribbean coming in second with the significantly lower figure of around six million.

US citizens travelled to Europe in 2013

US passports are now in circulation

The path to parity
Americans paying a visit to the Louvre or Checkpoint Charlie in the past year have seen the costs of their trips significantly reduced as a result of a rising dollar and weakening euro. Goldman Sachs has repeatedly published and revised predictions concerning the dollar and euro reaching parity by the end of 2016 and, likewise, other analysts have made similar predictions: Hamish Pepper, a foreign exchange strategist at Barclays, said in an interview with The Telegraph in March, “I think it’s only a matter of time before we reach parity, and we will do so by the end of this year.”

The reason for this convergence is the result of two separate economic trends on either side of the Atlantic. The dollar has seen its fastest price appreciation in 40 years, with last year’s fracking boom helping to push its value up. Likewise, the US economy – while still not quite pushing ahead at full capacity – has experienced relatively decent growth in a world of comparative stagnation. In contrast, the eurozone has been suffering from a crisis within its own borders, forcing it to keep its currency devalued. To achieve this, the European Central Bank (ECB) engaged in quantitative easing and held interest rates low, with no chance of a rise in sight.

The move towards parity between the euro and the dollar looks even more likely, as the US Federal Reserve now seems almost certain to begin raising interest rates by the end of the year. This in turn will attract more foreign capital, increasing the demand for the dollar and causing it to appreciate further against the euro. At the same time, as the difficulties in Greece continue to unfold, the euro only looks set to depreciate further. “The European Central Bank will push the euro lower… if it takes further action to keep peripheral eurozone countries safe from the spread of Greek-inspired financial risk”, said money analyst website Pound Sterling Live. “This is because the prime driver of the euro remains the European Central Bank’s policy on interest rates, and, importantly, quantitative easing.” According to one report, the euro could even fall below the value of the dollar by 2017. This change is dramatic when one considers that the euro was worth $1.60 at one point in 2008, and was worth roughly $1.30 for much of 2014.

Tempting tourists
Conventional economic wisdom would have it that the rising strength of the dollar versus the euro coincides with an increase in US citizens visiting Europe for a holiday. The actual link between exchange rates and tourism demands remains relatively under-studied and under-researched. As a 2014 article by Glauco De Vita in the journal Tourism Management notes, “the paucity of research on the role of exchange rate regimes on international tourism flows is conspicuous, especially when one considers the research attention that the wider literature has already devoted to exchange rate regimes, in terms of their effects on trade.”

Despite the small number of studies, among those that do exist it remains mostly beyond dispute that foreign exchange rates are an important determinant of tourism expenditure and demand. Exchange rate “inclusion in the tourism demand equation, therefore, has never been in dispute”, De Vita wrote. “A devaluation of a country’s currency makes inbound international tourism less expensive, and, consequently, increased tourist flows to that country should result. Conversely, an increase in the value of a country’s currency will make international tourism more expensive and cause a reduction in inbound tourist flows.”

When looked on as a general trend, the purchasing power of the dollar has a strong correlation with tourism spending. As The Financial Times reported – making use of statistics from the Bureau of Economic Analysis – the US “tourism trade surplus collapsed between 1997 and 2002, which happens to coincide with the last major bull run of the dollar. Similarly, the restoration of the surplus seems to have been anticipated by the dollar’s subsequent depreciation, while the downtick on the far right side of the chart seems to coincide with the dollar’s recent surge.”

Likewise, The Financial Times continued, “increases in the purchasing power of the dollar flow through almost immediately to changes in net tourism spending by reducing the tourist spending of foreign visitors to the US and by pushing Americans to spend more money travelling abroad, while declines in the value of the dollar have the opposite effect”.

Continental purchasing power
This hasn’t escaped the attention of the American press, which is urging its readers to make use of the exchange rate difference between the two currencies. In March 2015, The Washington Post proclaimed that it was “a great time for Americans to travel internationally”. It went on to say that “the economic slowdown in Europe has led to an overall decline in prices… While prices rose slightly in Germany and France – 0.1 percent – prices were down in Italy, Spain, the Netherlands and many other countries. So shoppers can find bargains in accommodations, food and local products. Meanwhile, the stronger dollar makes the differences even bigger. The dollar is worth 21 percent more than it was a year ago against the euro”. Kurt Crowl, Senior Vice President of Connoisseur Travel in Washington, commented that, partly as a result of these differences, “on the leisure side, Europe is really, really hot”.

Taking advantage
Likewise, The Wall Street Journal also noted in March 2015 that the “strength of the dollar against the euro has created the best buying opportunity of the decade for Americans going to Europe. Even famously expensive cities like Paris have seen prices plunge”. These economic trends have significantly cut the costs for some: The Wall Street Journal cites the case of two retirees from Seattle, who said that they had “been searching our life away for a trip to Italy”. They estimated that a month-long holiday in Europe would cost them around $10,000 each. But thanks to cut costs, they have been able to book a trip to Rome, followed by a weeklong stay at a villa in Tuscany and a series of shorter visits to other Italian cities, before heading to Paris and then London, all for a grand total of $4,400 each.

As Professor Adam Blake, President of the International Association for Tourism Economics, told Business Destinations, “The price of a trip is a key factor when people choose destinations for travel, and particularly for holidays – significant changes in exchange rates are often very visible ways in which we as consumers can see prices changing”.

The holidaying website Eurocheapo outlines just how much cheaper American tourists will now find Europe. In 2008, a dinner for two when converted to US dollars would have cost roughly $104, whereas in January 2015 it would cost, on average, $76.05. Likewise, hotel rooms per night have slid from $192 to $140. Obviously such prices fluctuate throughout Europe, but in general US tourists have a lot more purchasing power now than they have ever had in previous years.

The answer to Europe’s crisis
Many have already taken advantage of the exchange rate difference: the number of Americans flocking to European countries so far this year seems to confirm that a strong dollar and weak euro makes for an enticing incentive to visit the Old World. The total number of US passports issued in 2014 was 14.1 million – one of the highest rates recorded in recent years – which has led to the total number of US passports in circulation reaching 121.5 million. These number increases are also being felt in Europe’s key tourist sites, with over nine million people expected to visit the Louvre this year.

“Europe feels like it’s on sale this year for Americans”, said Barrie Seidenberg, CEO of Viator, a US-based vendor for tickets to European attractions, in an interview with The Guardian. He went on to point out that advance tickets purchased by US tourists to visit the Eiffel Tower had rocketed 170 percent this year, as well as there being an increase in ticket sales for Rome’s Sistine Chapel. This presents an opportunity for eurozone countries to “improve service quality, develop a diversity of tourism products, prolong tourists’ stays and promote their tourism destinations to Americans”, said Dr ShiNa Li of Leeds Beckett University’s International Centre for Research in Events, Tourism and Hospitality.

History shows us two things: that Europe has always been a popular destination for US tourists, and that American demand generally seems to be sensitive to exchange rate price changes. For instance, back in 2007, when the dollar was at a relatively weak level compared to the pound – two dollars for every pound sterling – the number of Americans visiting London took a dive. As The Guardian reported at the time, London dropped off the list of top 10 tourist destinations for US travellers: “London is a perennial favourite destination for US citizens, however the unfavourable exchange rate has made the UK an expensive choice as the current comparative rankings clearly show”, as Cheapflights’ Group Managing Director, Chris Cuddy, was quoted.

Now, the opposite is true: just as Americans are less likely to travel to destinations where they will suffer a poor exchange rate, they are far more likely to travel to places where they can enjoy a strong one – as they can, and (according to predictions) increasingly will, with a strong dollar and weak euro. This will see more and more Americans roaming the continent’s narrow city streets, much to the benefit of Europe’s somewhat troubled economy.