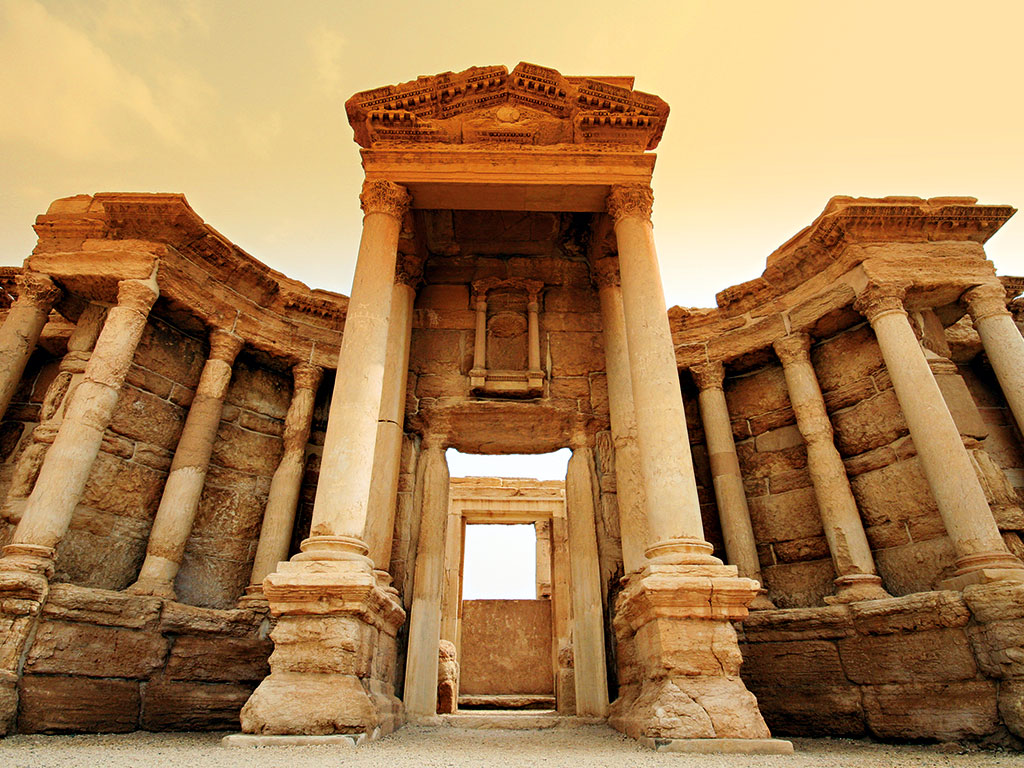 The ancient city of Palmyra, much of which was destroyed by ISIS in 2015

In late May 2015, after days of fierce fighting, the Islamic State group (ISIS) captured the ancient city of Palmyra from the Syrian Arab Army and its allies. As Syrian Government forces withdrew from the area, the extremist group rolled in on its flatbed Toyota trucks and began to open prisons, round up alleged collaborators and establish a brutal rule.

Perhaps now accustomed to the inhumane atrocities that typically follow a territorial takeover by ISIS, much of the international concern that followed was specifically placed upon the fate of the city’s many historic temples and archaeological ruins, many of which date back thousands of years.

Prior to the Syrian Civil War, the city had been the country’s foremost tourist attraction: tourists could easily catch a bus from Damascus in order to explore Palmyra’s ancient ruins and the city was, in many ways, a source of pride for Syrians. It stood as a testament to the country’s impressive history and its status as the once-home of the Queen of the Palmyra Empire in the third century, who led a famous revolt against the Roman Empire. Centuries before the appearance of the Romans – and for some time after – the city had been a major trade route, giving it its unique architectural style.

The project should result in the recreation of any cultural artefacts that are destroyed in the future, but the marvel of seeing a structure that dates back thousands of years will be lost

Iconoclasts of Syria and Iraq
As was expected, and as the group had done many times before, ISIS soon set about destroying the city’s historic monuments. Although many of the city’s portable treasures had been hastily removed just hours before the group arrived, untold numbers of priceless artefacts remained – not least the ancient temples that had made the city so famous in the first place.

The first major site to be destroyed was the 2,000-year-old Baal Shamin Temple, which was shortly followed by the Temple of Bel. After reviewing satellite imagery, the UN confirmed the “destruction of the main building of the Temple of Bel, as well as a row of columns in its immediate vicinity”. After surviving for thousands of years and outliving its many occupiers, conquerors and empires, some of the city’s most famed historic monuments were reduced to nothing more than rubble.

Prior to this attack, ISIS had already destroyed untold numbers of monuments across the region: in Ar-Raqqah, the purported capital of the group’s territory, ISIS ordered the bulldozing of a colossal ancient Assyrian gateway; a lion sculpture dating back to the eighth century. The group has also released footage of it destroying ancient relics in the Iraqi city of Mosul.

History repeating
This is not the first time that a militant group sharing a similar world view to that of ISIS has destroyed sites of historical value: in 2012, following a military coup that plunged the nation into chaos, a group called Ansar Dine seized large swathes of northern Mali, taking with it the ancient city of Timbuktu and various other sites that had only recently been added to the UNESCO protection list. These included the mausoleums of Sufi Muslim saints that dated back to the 15th century.

Viewing the existence of these relics as encouraging idolatry, the zealous occupying force quickly moved to destroy them. At the time, Yeya Tandina, a local journalist, told Al Jazeera, “They have already completely destroyed the mausoleum of Sidi Mahmoud and two others. They said they would continue all day and destroy all 16”. Further destruction came when pick-axes were taken to the mausoleum of local saint Sidi El Mokhtar, as well as six other sites, it was reported.

After the group was routed following a French military invasion, the city was placed back under the authority of the Malian government and UNESCO soon got to work attempting to restore the historic monuments. Owing partly to the crude nature of Ansar Dine’s weapons, much of the destruction was not complete and some physical restoration could occur.

According to the Director-General of UNESCO, “There is still much to be done, both in the field of culture (to rehabilitate the mausoleums, save and digitise the manuscripts) and in the field of education (to ensure access to quality education for all Malians, which naturally remains a priority for UNESCO)”. It is the organisation’s goal that one day tourists will once again be able to marvel at the historic shrines of the still-beleaguered African nation.

Taking action
Many of the shrines that were destroyed will never be fully restored to their exact pre-Ansar Dine likeness. However, the Million Image Database project (MID) – a collaboration between the Oxford-based Institute for Digital Archaeology (IDA) and UNESCO – hopes to minimise the critical damage done by such onslaughts. Through distributing thousands of 3D digital cameras to warzones where historical sites are under threat, MID hopes that by recording every angle of the world’s most at risk archaeological ruins, they can be recreated through digital prints.

According to Erin Simmons, Director of Administration at IDA, the project “sprang out of a much older project in collaboration with ISAW [the Institute for the Study of the Ancient World] for a standardised, open-source epigraphy database”. As part of this project, they were “exploring cheap 3D camera options for some time” – however, once the nihilistic destruction of history by militant groups became more commonplace, the project refocused and stepped up a gear: “When it became apparent that the crisis of cultural heritage destruction in parts of the Middle East was going to continue, we re-focused the goals for the database and stepped up the timeframe for the 3D camera manufacture”, Simmons told Business Destinations.

Through working with many partners, from government cultural departments to individuals who live in affected areas, MDI has distributed around 5,000 digital cameras that will contribute to the study and, if required, 3D replication of destroyed sites. “Everyone who wants to be a part of the project [is accepted], provided we do not believe they will be in immediate danger”, Simmons continued.

Something lost
While the project, if successful, should result in the recreation of any cultural artefacts that are destroyed in the future, the original monuments themselves will still be lost. Ancient temples will be devastated and, while replicas may be created to replace them, the marvel of seeing a structure that dates back thousands of years will be lost. However, the project is still of vital importance: as Simmons explained, “The sites and artefacts themselves are important, but what they represent is much more important. Civilisation began in the Fertile Crescent; this isn’t just the history of the Western world, but of humanity itself.

“Unfortunately, in the world of art and archaeology, it is often true that out of sight is out of mind. Recreating these sites for future generations ensures the continued existence of our shared history”. While the real sites will be lost, once peace returns to Syria, people from the world over will at least be able to get a sense of humanity’s shared history in the Levant.