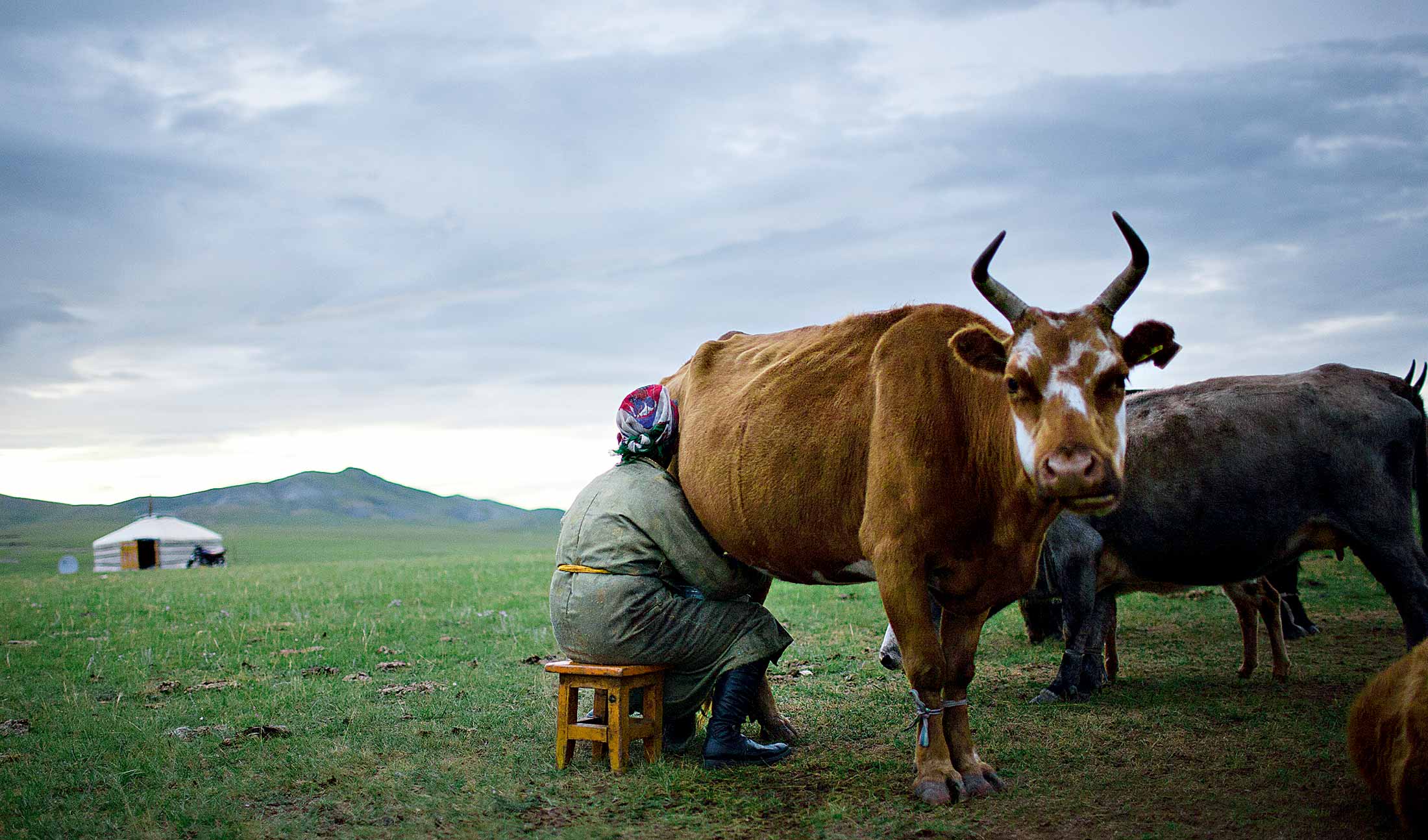 From the Gobi Desert in the south, to the Khentii Mountains in the north, Mongolia is an untamed wilderness. The nation is vast, remote and landlocked – surrounded on one side by Russia, the other, China. Steppes stretch for hundreds of miles from east to west, a wild landscape speckled with centres of civilisation.

The country is the most sparsely populated in the world; 30 percent of the population are nomadic or semi-nomadic, and a further 40 percent live in the country’s capital, Ulaanbaatar. Despite the amount of Mongolians who still choose to travel the steppes and live an agrarian life, 70 percent of Mongolians have access to electricity – some nomads even travel with widescreen televisions that can receive a satellite feed in the middle of the grasslands.

There is vast potential for wealth here, wealth that the country can use to modernise

In this respect, Mongolia is a tale of two countries – a busy urban centre awaiting foreign investment, and vast expanses of land travelled by few.  Mongolia’s story has echoes of industrial revolution on an extremely accelerated scale, but it still manages to evoke the myth of a frontier land of traders and horse tamers.

Riches of the Earth
Mongolia has the potential to be a very rich country indeed. Beneath the soil all across the country there are hidden secrets: copper, coal, tin, tungsten and gold, even oil. Such is the extent of Mongolia’s natural resources that it has been called the ‘Saudi Arabia of Asia’. There is vast potential for wealth here – wealth that the country can use to modernise.

This nation of 2.8 million people could very well be the next big thing. In 2014 the Mongolian economy is expected to grow at a blistering rate of 15.3 percent – by far the fastest-growing economy in the world, a trend that the IMF predicts will continue for the next decade. As it stands, the Mongolian economy is small, with a GDP of just $11bn, but the country is ready to open itself to the rest of the world.

The potential to exploit natural commodities in Mongolia is on an almost unprecedented scale. One investment agreement between Rio Tinto and the Mongolian government to develop a mine at the Oyu Tolgoi copper deposit is expected to account for one third of the country’s GDP by 2020. At nearby Tavan Tolgoi, the rights to the world’s largest untapped coal deposit are about to go under the hammer. One estimate says Mongolia could have $1.2trn in natural resources ready to be exploited. Such is the country’s potential that Renaissance Capital named Mongolia the ‘Wolf Economy’, calling its economic growth “unstoppable”.

Since the early 90s, Mongolia has been trying to enact reforms that bring it closer to a free market. Mongolia’s economy is traditionally based on herding and agriculture and two-thirds of its exports go to China, making the Red Dragon a vital trade partner, even if it signals a potentially worrying reliance on the world’s second-largest economy.

In fact, none of the WEF’s predicted scenarios for Mongolia see the country escaping China’s grasp. Even in the best-case scenario, where Mongolia finds itself easily able to produce and sell goods and services, would require what the WEF call a ‘regional renaissance’ where “North-East Asia becomes more politically integrated, with strong economic growth”. The WEF notes that the country could be used as a bargaining chip if geopolitical tensions and resource scarcity begin to affect Asia, a situation that the Mongolian authorities will desperately seek to avoid.

Perhaps these risks are part and parcel of sharing a border with such a pre-eminent country; whatever happens in China will have deep ramifications for Mongolia’s economy. For now, it seems China is one of the most ardent investors in the country, but foreign money could benefit Mongolia greatly.

A country in flux
The process of change began two decades ago, when the country transitioned from a Soviet-installed communist regime to a multiple-party system. Mongolia’s so-called Democratic Revolution changed the country’s make-up dramatically and the 90s were turbulent as reforms struggled to take hold. Food shortages and high inflation set the country back by as much as ten years, but the signing of contracts to develop mines in the Tolgoi region is a huge milestone for Mongolia’s economic reform. Mongolia has proven fragile in the past – the Asian financial crisis of the late 90s and a string of Russian bans on Mongolian goods both inflicted wounds.

The current slowdown of the Chinese economy could cause problems for Mongolia. When the economic crisis hit China in 2008, Mongolia suffered by proxy and endured an economic slowdown, albeit not a recession. Now, as Chinese demand for minerals and metals declines, Mongolia could feel the effects. This is never truer than with copper. Widely regarded as one of the clearest indicators of economic health, global copper prices have struggled this year due to domestic conditions in China. Reduced demand means an increasing stockpile of Mongolian minerals, and proves the risks of a relatively undiversified list of trading partners.

Despite this, the country’s populace are beginning to feel the trickling down of economic growth. Unemployment has dropped below 10 percent and real wages doubled within the space of twelve months last year. Foreign money could bring the country much-needed healthcare and educational reforms. During the Socialist era, the country virtually eliminated illiteracy thanks to a comprehensive programme of boarding schools for wandering nomads to leave their children at. During the 90s, these schools suffered funding cuts and illiteracy grew again. Recent reforms, including increasing the number of compulsory school years to 12, have started to tackle this with the help of foreign investment.

Meanwhile, the country’s healthcare system continues to thrive under the new inflow of money, but there are serious problems providing medical services in the deep countryside. More worryingly, according to a 2011 World Health Organisation study, Ulaanbaatar is the second most polluted city in the world; old cars, belching factories and the burning of firewood all contribute, but the problem is exacerbated by the city’s cold climate.

Ulaanbaatar is the coldest capital city on the planet, and the still air means that a near-permanent cloud of pollution hangs overhead. This problem is likely to develop as more Mongolians are moving to urban centres and away from an agrarian lifestyle, in an echo of the Industrial Revolution. The difference with Mongolia is the sheer pace of change – so fast that Ulaanbaatar and the country itself scarcely seem able to keep up.

Ulaanbaatar still has telltale signs of its Soviet past – a seemingly endless sea of concrete flats that are now being modernised. The city is bustling with construction; Mongolia’s first skyscraper proper was completed in 2009, and high-rise apartments are now springing up across the city’s skyline.

Reaping the rewards
Mining is driving economic growth and is slowly affecting every part of the supply chain. Everything from mining supplies, to transport, to the services required to manage the operations, is being built from the ground up, across the country. Perhaps most important is the revitalisation of Mongolia’s ailing transport network. A new airport is being built to service the capital, further opening the country to foreign investment.

The country currently has poor road links – only one road leads to Russia and there is no land link to China that doesn’t involve navigating the width of the Gobi Desert. Mongolia’s road network is as it was two decades ago, but since then the number of vehicles has more than doubled. A more extensive road system could benefit Mongolia’s nomads. Although some viable pasturing land will be destroyed during the construction, the opportunity to sell goods to travellers on the way to China is reminiscent of historically great trading links throughout the region, like the Silk Road. A major project, scheduled for completion this year, will integrate the country’s roads with the Asian Highway system so that, by 2015, a driver will be able to cross Mongolia to get between Russia and China for the first time.

The Mongolian rail network enjoys good links to Russia and China on the mainline between the countries, and with low cargo capacity at the nation’s airports, this remains the only practical way to move goods in and out of the country. Asian Development Bank loans in the 90s allowed the country to modernise airports, but by 2005 only four had paved runways and most were below international aviation standards. This second phase of development, and especially the new airport at Ulaanbaatar, will go a long way to opening the country to the rest of the world.

Mongolia’s banks are feeling the boons too, growing by as much as 50 or 60 percent yearly because of all the interest in the country. Loans, deposits and profits are all up, but the banking sector still consists of a handful of banks commanding the majority of the market.

Sticking points
It’s not all good news. The country is on the path towards economic freedom, but it’s not there yet. The 2014 Index of Economic Freedom blames the government for lagging reforms: “Despite notable strides made over the past decade, the momentum for deeper institutional reform has largely stalled. Prospects for enhancing economic freedom remain curtailed by a lack of institutional commitment to strong protection of property rights and by ineffectiveness in fighting corruption.” Part of the delay is caused by the Mongolian government’s nervousness of foreign investment, fearing that investors might immediately sell valuable assets to Chinese companies, increasing their reliance on the economic giant.

Meanwhile, the country’s currency, the tugrik, is under heavy intervention from the government to keep it stable as it sinks to historic lows against the dollar. This is the result of poor exports last year and falling foreign exchange reserves.

The problems are compounded by the fact that an estimated 100,000 Mongolians are participating in illegal mining – small-scale digging operations looking for ore to sell on the country’s grey market. Although exact figures are hard to come by, it is believed these illegal operations now produce more than the formal mining sector. If this is true, then the Mongolian government has real work ahead to regulate the industry.

But such modernisation puts the Mongolian nomadic tradition at risk. As expansion of mining operations chews up more steppes, the government is making the first moves towards privatising land. If this happens, nomadic herders will find themselves forced out of traditional grazing grounds. Unfortunately for Mongolia’s nomadic population, the government is set on attracting more foreign investment, and land reforms are a necessary evil in achieving this. While it remains to be seen what will happen over the next decade, Mongolia’s nomads find themselves in a delicate position.

The potential for economic growth in Mongolia is strong. With immense natural resources and a government that seems increasingly committed to forging links with the outside world, both politically and economically, the country looks set for a period of prosperity and progress.