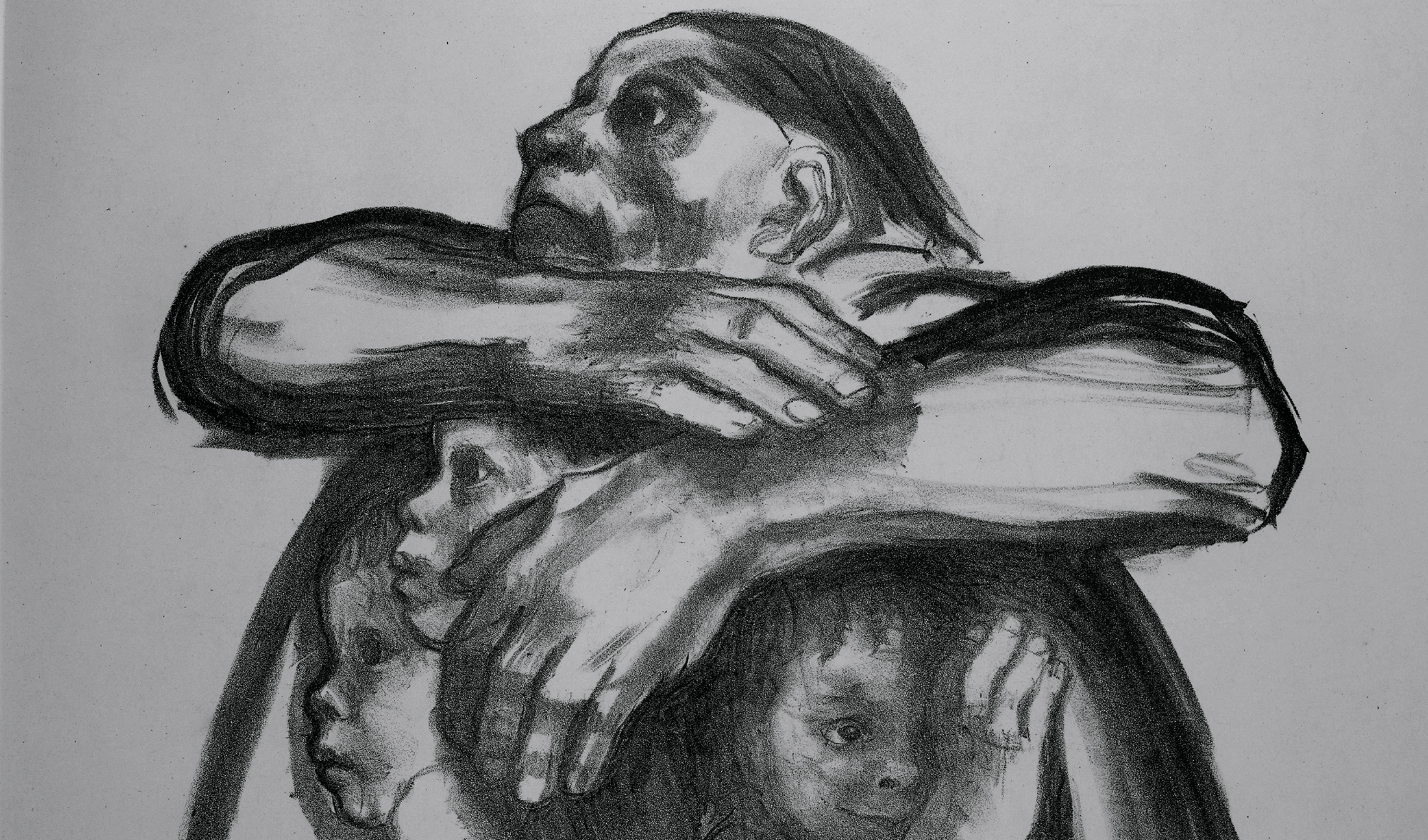 The colours are what strike you first. Or rather, it’s the disparity between the vibrancy of one set of works and the bleakness of the other that draws the eye. While Käthe Kollwitz worked almost exclusively in monochrome, her etchings puddles of darkness from which the stark outlines of desperate figures emerge, Kata Legrady’s sculptures and large-format prints shimmer with promise and colour.

Legrady, who was born in Hungary but now lives between Budapest, Paris and Hannover, may not seem like the obvious counterpoint to Kollwitz, one of the most important European printmakers and sculptors of the period between the First and Second World Wars. But when Gudrun Fritsch, curator of the Käthe Kollwitz Museum in Berlin, began to think about how the gallery might mark the centenary of the start of World War One, she immediately saw how Legrady’s provocative explorations of militaristic propaganda could speak powerfully to Kollwitz’s mournful, angry depictions of the impacts of conflict. Warning & Temptation: The Pictorial Worlds of War of Käthe Kollwitz and Kata Legrady, was born.

“If she hadn’t had her art, her talent, I’m absolutely sure she would have gone mad with guilt”

“Legrady wants us to look twice,” explains Fritsch, pointing to works such as Mine (multicolour) and Partitur 1-2-3 (both 2009), which show weapons decorated with pretty, jewel-like candies. Look beyond the sugar coating of nationalism, these works suggest, and all you’ll find is death and destruction.

Other aspects of war come under fire too: in the 2013 series Fur Grenade, what appear to be genuine antique grenades have been wrapped in tiny, luxurious pelts to ridicule the glamorisation of conflict. The Colt Government, a handgun used by the US armed forces in both world wars, is a frequent motif, whether wrapped in dollar bills as a reference to the role of the arms industry and the business of war (Government US-Dollar, 2012) or made into a child’s plaything (Rocking Horse, 2011) to suggest the way militaristic and nationalist propaganda impacts on us from an early age.

Born and brought up in Soviet-era Hungary, and twice competing for her country in the Youth Olympic Games, Legrady experienced this style of propaganda first-hand. Not all her works on this theme are terribly subtle, but they are effective: there are some messages that benefit from being shouted rather than whispered.

There is shouting within Kollwitz’s oeuvre too, but it’s mainly found in the pacifist posters for which the artist became famous in the years following the First World War. Having lost her 18-year-old son Peter to the fighting a few months into the conflict, Kollwitz rejected her previous belief in the power and validity of violent revolution, turning wholeheartedly to pacifism instead.

War: Never Again!, 1924, perhaps Kollwitz’s best known poster, is displayed here alongside other originals, such as Free Our Prisoners, 1919-20 and The Survivors – Make War on War, 1924. These posters appeared in their thousands all over Europe, but were sought out and destroyed after the Nazis came to power in Germany in 1933, their pacifistic message antithetical to the new regime. Only a handful survive.

Kollwitz was immensely proud of these posters, says Fritsch, but it was her final print, Seeds for Sowing Should Not Be Milled, 1942, that Kollwitz referred to as her “testament”. She died three years later at the age of 77, just weeks before the end of the Second World War. Unlike many artists and intellectuals of the time, Kollwitz did not flee the Nazis, despite being stripped of her professorship at the Prussian Academy of Arts in Berlin (she was the first woman to hold the title), having her work removed from museums and being forbidden from exhibiting.

Motifs of motherhood
Kollwitz’s final lithograph features a motif she had been exploring from the start of her career, but which took on even greater significance in her later work: that of a mother protecting her children. There are plenty of moving portrayals of this subject in Warning & Temptation, from the small bronze Pieta, 1937-38, to the more overtly political The Widow II, a woodcut from War, a series the artist produced between 1918 and 1923.

Kollwitz saw motherhood as the most important role available to women, says Fritsch. The tragedy that she could not protect her own son – and, in fact, persuaded her husband to let their boy volunteer in the first place – is palpable in all of the artist’s late mother-child works.

“If she hadn’t had her art, her talent, I’m absolutely sure she would have gone mad with guilt,” says Fritsch. The curator should know: she has been closely involved with Kollwitz’s work since 1967, when she attended an exhibition put together by the influential gallerist Hans Pels-Leusden and was brought to tears by Kollwitz’s 1907 etching, Battlefield – “I don’t know why,” she says.

When Pels-Leusden pointed out that this was clearly a work she needed to own, she told him that, as a student, there was no way she could afford to buy it. The dealer offered to accept payment in instalments and a friendship began that would ultimately lead to the pair establishing the Käthe Kollwitz Museum together in 1986. It is a story Fritsch tells with emotion in her voice.

The museum is privately funded and presents two exhibitions a year, displaying works from its permanent collection (which has its foundation in a considerable haul donated by Pels-Leusden) alongside those of other artists. Accompanying Warning & Temptation is a small display of works by local schoolchildren and young people responding to Kollwitz’s War: Never Again! in this important centenary year. Fritsch feels passionately that the artist should be more widely known in Germany: she would like to see Kollwitz’s work on the curriculum.

Part of what makes Kollwitz’s prints and sculptures, and the works by Legrady that hang here alongside them, so powerful is what they do not say, rather than what they do. Neither artist, Fritsch explains, “shows the real battlefield. They don’t show soldiers fighting, they just give an idea of the consequences of war.” The real battlefield is left to our imagination.