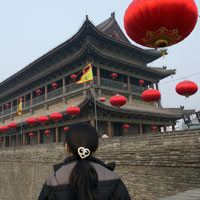 The terracotta warriors of Xian are widely regarded as the greatest archaeological discovery of the twentieth century; 80,000 figures in full battle formation buried beneath the city suburbs since 210 BC. They’ve become more famous than the city itself; yet Xi’an is older than Beijing and Shanghai and has a fascinating history stretching more than three millennia into the past.

This was once the eastern end of the legendary Silk Road travelled by Marco Polo and the cultural capital of the nation, while the Wei Valley in which it sits is one of the major focal points from which the great Chinese civilisation developed. Needless to say, there’s plenty of history, but the city itself is very much alive and kicking. For some, it’s almost too alive – this is a true city in the Asian tradition; busy, chaotic and totally alien to the unprepared westerner. Take the time to explore it, though, and you’ll begin to discover its many hidden charms and fall in love with its honest, enchanting culture.

Where to stay
The Sofitel is housed in an impressive modern building overlooking an expansive, open plaza; the rooms are spacious and comfortable and the location is perfect for exploring the city. The lavish interior at the Shangri-La hotel will have you wondering whether you want to leave, as will the superlative service.

Where to eat
Larry’s Singapore Restaurant is a late opening travellers’ favourite with an Asian menu mixing Chinese and Malay influences. The Tang Dynasty is another great option that serves live entertainment to go with the superb cuisine.

What to see
The Terracotta Warriors should be the first item on your itinerary. Big Goose Pagoda and Small Goose Pagoda are more examples of Xian’s wonderful heritage without so much of the theme park feel.