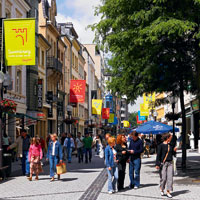 “Of all the countries I have visited, the Grand-Duchy of Luxembourg is the smallest, but it is the one that has charmed me most and where hospitality has been most simple and cordial”.  – Winston Churchill.

As the above quote shows, the Grand Duchy of Luxembourg is a fascinating place, with a touch of difference. The Grand Duchy (502,000 inh. often abbreviated to just “Luxembourg”) is the sixth-smallest country and the only Grand Duchy in the world. The capital city (90,800 inh.) is also called Luxembourg – and there are certainly many reasons to be convinced to hold a meeting there.

A cosmopolitan and welcoming meeting destination
Bordered by Belgium, France and Germany the Grand Duchy is connected to the far corners of Europe by an excellent network of highways and rail links and the international airport is located only seven kilometres from the city centre. The country is also a linguistic puzzle and several languages – French, German, Lëtzebuergesch – a Franconian language of the Moselle area – and English are spoken and written at the same place. The city has 159 different nationalities among its residents, not to mention more than 100,000 cross-border workers on a daily basis.

A European city and a financial centre of international stature
The smallest member of the European Union, Luxembourg was nevertheless the cradle where the concept of a unified Europe was born and is the official seat of many of the European Union’s major institutions. Banks and investment trusts have settled in the capital, as the fiscal legislation, which dates back to 1929, favoured Banks and Holding Companies. Luxembourg indeed plays a major role as a prominent international financial centre and represents the greatest banking concentration in the European Community.

The safest city in the world
Luxembourg is regularly ranked as the world’s top city for personal safety by the renowned Mercer Survey Institute. A glance at the city’s history shows that this more than thousand year-old capital, founded in 963, has always known how to protect itself. Luxembourg was occupied by Burgundians, Spanish, French, Austrians and Prussians, all of whom contributed to making the city one of the best fortified in the world usually called the “Gibraltar of the North”. Today, the fortress, along with the old city, has gained international fame. In 1994, UNESCO recognised the city’s historical importance by naming it a World Cultural Heritage Site.

Impressive meeting and event locations
Luxembourg provides meeting facilities for any meeting size, up to 2.000 persons and event venues accommodating up to 8,000 persons, with a savvy mix of technical know-how, flexibility, comfort and aesthetics. Featuring both prestigious hotel chains and quality independent hotels, there are some 3,600 rooms on offer. The city also offers a number of unusual banquet and event venues such as the Bock casemates, which are a labyrinth of underground galleries and passages inside the fortress on the Bock promontory or the prestigious former Abbey of Neumünster in the lower city.

Catering to the gourmet
There can be no doubt that the Grand-Duchy of Luxembourg is truly a gastronomer’s delight. It has more Michelin-starred Restaurants per square mile (or per head of inhabitant) than any other country in the world. Most traditional dishes are of peasant origin, but Luxembourg’s affinities with both French and German culture have long ago been translated into the country’s speciality foods. Outstanding wines of the Moselle Valley, chocolates and Villeroy & Boch porcelain are typical products and make ideal souvenirs and gifts.

A thriving cultural life in the capital and great attractions in the surroundings
A wide variety of city sightseeing tours, an attractive pedestrian zone with a lot of cafés and shops as well as idyllic and relaxing parks, provide the ideal setting for refreshment and revitalisation and also ensure the success of an event in the city. From the vineyards on the Moselle, to sites marking the Grand Duchy’s iron and steel-making past to the thermal spa, the range of touring programmes and individual sites for leisure and enjoyment is infinitely varied.