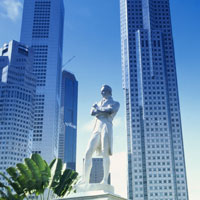 An Asian island city-state located off the coast of Malaysia, Singapore is the fourth largest financial centre in the world and is often regarded as the most open, business-friendly economy. With a 50 percent expatriate workforce it also has the highest percentage of foreign worker of any country and can legitimately claim to be the most globalised, multinational state there is.

The city itself is wondrously clean, efficient and friendly considering that the population density is second only to Monaco. Chinese, Malay, Indian and European influences have all gone into creating some mouth-watering cuisines while the Asian Civilisations Museum is an icon every bit as important as the British Museum or the Louvre. There are ample opportunities for both water and land sports to keep more active visitors entertained, plus hundreds of watering holes in which to chill out at the end of the day.

A former British colony, the mix of east and west lingers in the country’s social structure; though it claims to be egalitarian, informal hierarchies exist in many arenas, including the work place. Many such relationships are linked directly to ‘face’ and most Singaporeans will go well out of their way to avoid the loss of dignity and respect.

As such, direct confrontations are to be avoided; communication styles are subtle and include a great deal of non-verbal exchange. Moreover, etiquette will vary by ethnic group, creating a complex cultural landscape that takes time to fully explore. Pay attention and show respect, and Singapore will be an excellent place to do business.

Changi International Airport is around 20km east of the city centre. There are frequent buses and ferries to Malaysia, with a few buses that continue on to Thailand.

The public transport system is superb and you can get virtually anywhere by bus and MRT (train). There are regular ferry services linking the southern islands. Car rental is fairly expensive but traffic is orderly.

Business etiquette: Greetings, titles and gift giving protocol vary with ethnicity, gender and age – you are advised to familiarise yourself with Chinese, Indian and Malay customs before travelling. Business is formal with strict protocol and business relationships take time to develop. Rank is important and is always respected.

Laws: Murder, abduction and drug offences are among those that can incur the death penalty. Racial insults, smoking in public, chewing or importing gum are all illegal.

Healthcare: Vaccinations required for tetanus, tuberculosis and hepatitis B. Healthcare facilities are excellent with an extensive private sector. Health insurance is recommended though not essential.