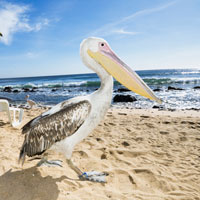 Senegal only has one major city but don’t let that fool you – nearly half the country is now urbanised and the capital Dakar is one of the trendiest and most fashionable cities in the southern hemisphere. Indeed, it is occasionally referred to as the ‘Paris of Africa’ and is home to the brightest designers and the most fashion-sensitive crowd on the continent.

Dakar sits astride a glorious peninsula surrounded by an idyllic blue ocean. The city is pulsing with life; vibrant markets, live music, dance, numerous fashion events and a busy nightlife all contribute to a chaos that can lead to sensory overload. Cosmopolitan to the extreme, the capital is a melting pot for various tribes and races, including a number of Europeans. Senegal is less conservative than many Muslim states and the mix of ideals can be seen in the rich variety of performances and craft.

For a respite, visit the peaceful and historic Île de Gorée, just a quick hop on the ferry. Alternatively, the numerous sandy beaches that surround Dakar are almost as famous as the trend-setting culture. Further afield, the old city of Saint Louis offers a more meditative experience and the Casamance delta, a short trip up the coast, shows that Senegal has its fair share of natural beauty as well.

Dakar has the only international airport and is well connected to other African capitals, though there are few direct flights beyond the African continent. There are regular connections by bus to The Gambia, Guinea, Guinea-Bissau, Mali and Mauritania; these routes can take some considerable time.

Sept-place (7-seat) taxis are the best way of getting around the country’s often difficult roads. Larger buses are available but are far more prone to delays and breakdowns. There are limited internal flights to Ziguinchor and Saint-Louis.

Business etiquette: Business cards should be printed in English and French. Lightweight suits should be worn. Greetings and punctuality are very important, and the right hand should be used for shaking and passing items.

Safety: Avoid large political gatherings and rallies or unnecessary travel at night. There have been warnings of alleged terrorist activity, particularly in the South, possibly targeting western tourists. Muggings and robberies are common, particularly in the restaurant district of Dakar; remain vigilant and dine out in groups.

Laws: Strict regulations apply to import of technical machinery, such as computers or car parts.

Socket type: Type C is most common, though Type D is also used and Types E and K are occasionally found.