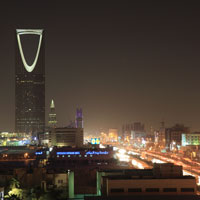 Saudi Arabia has long seemed a mysterious, forbidden kingdom to the west. With riches built on the largest oil reserves in the Middle East, it has become better known for its super-wealthy oil barons than its cultural contributions. Yet the cities of Mecca and Medina are the two holiest sites in Islam; since the seventh century AD, when warring tribes observed an annual truce to complete the journey in peace, Mecca has become a virtual synonym of the word ‘pilgrimage’.

Until recently, it was largely impenetrable to anybody not observing the hajj, but the veils have started to lift. Much remains uncharted by western travellers but there are many highlights to enjoy; beyond the abundant mosques and other holy buildings, the coral houses of Jeddah on the Red Sea shores are a delight to behold, while the reef itself is spectacular and unspoiled. The fertile oases and mud skyscrapers at Wadi Hadramawt are as wondrous as the legends of ‘Adite giants and gold-flavoured honey that they’ve spawned.

Islamic conservatism still demands some concessions; women are required to wear the abaya and there are many areas that are still virtual no-goes. But Bedouin hospitality is unrivalled and you’ll be made to feel genuinely welcome as long as you observe the strictures of the culture. The people will leave as great a mark as the endless, haunting desert, and will pleasantly challenge many of your preconceptions about these mysterious people.

Business etiquette: A Saudi sponsor (wakeel) is required to enter the country; he will act as an intermediary and arrange appointments and meetings. Suits are the norm; Saudis judge by appearances so be well presented. Relationship building can take time and decision making can be bureaucratic.

Tipping: 10 percent, unless included in the bill.

Safety: The crime rate is low; theft may occur in crowded places.

Laws: Women are legally obliged to wear the abaya in all public places.

Healthcare: Vaccinations required for hepatitis A and tetanus. Healthcare facilities are of a very high standard but also very expensive; health insurance is essential.