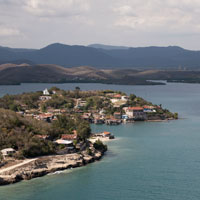 The setting is spectacular; snow-dusted behemoths line the eastern horizon as the mighty Andes run north to south as far as the eye can see. The city itself can appear both congested and sprawling, with five million residents packed between the twin barriers of mountain and ocean, yet despite it all communities remain clustered around ancient barrios that retain their own individuality and create a refined and rewarding scene for those willing to explore beyond the city centre.

There you’ll find local arts laced with dual indigenous and Hispanic influences, healthy city markets that dazzle with the energy and diversity of wares on show, and quiet city parks where you can catch a breath of cleaner air and ponder the distant Andean peaks that provide bountiful opportunities for skiing, climbing, trekking and riding for locals and visitors alike.

Where to stay
The Aubrey in the lively bellavista barrio is a fantastic boutique full of charm and character that excels in every way. Meriado Sur Petit combines Chilean artisan furnishings with a sleek modern finish, creating a beautifully balanced interior that feels like a home from home.

Where to eat
Sleek, minimalist Agua is the place to be and bustles with beautiful people sampling the fine fusion Chilean-European menu. Just as fashionable but with a far less exclusive crowd, Bar Liguria is a popular and unpretentious spot for genuine Latin American cuisine.
What to see
The Plaza de Armas, Metropolitan Cathedral, central Correos building and vibrant Casa Colorada are all highlights of a city tour, by foot or on bike. Chilean wine has seen a boom in worldwide appreciation in the 21st century and a winery tour is a great way to pass an afternoon; the Vina Undurraga is possibly the best. San Cristobal Hill offers panoramic views of the city.