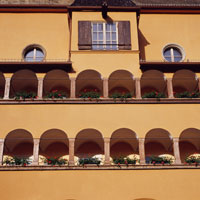 The stunning Alpine setting of Salzburg was the scene for the smash hit Sound of Music, but their most hallowed legacy is probably the work of its most famous son – for these are the hills that inspired Wolfgang Amadeus Mozart.

The beautiful city centre is an aria of Baroque architecture and one of the best preserved of its kind in the world; the surrounding peaks are an overture of such epic eloquence that you’ll often catch yourself simply standing and staring.
Yet, though Salzburg may resemble an idyllic model captured in an Austrian snow globe, when the sun goes down there’s plenty of life to prove otherwise. The lights that light up along the river give it a gothic feel as the people come out to play, and there are plenty of opportunities to take in Eine Kleine Nachtmusik and dance the night away.

Where to stay
15th century Goldener Hersch provides 21st century amenities without losing any of the historic ambience, while the high ceilings and crystal chandeliers of Hotel Bristol match it for charm. The Sheraton and Best Western Elefant are two more great options.
Where to eat
The K&K Restaurants am Waagplatz is set over three floors of the former home of one of Salzburg’s most prominent 18th century families, with food to match the fine surrounds. The Gasthof Wilder Mann’s excellent Austrian fare is served in a far smaller, more intimate environment.

What to see
St Peter’s Monastery and Salzburg Castle are striking sights with plenty of history; alternatively, try a game of giant chess not far from the Salzburger Dom cathedral or a tour of the surrounding salt mines. Mozart lovers can walk to his square, past his memorial and visit his birthplace and residence to pay homage to the musical genius.