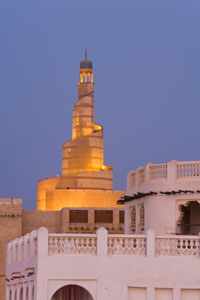 Perched on an isolated peninsula on the Saudi coast, Qatar defies easy stereotypes. Since gaining full sovereignty, following independence from the UK in 1971, the country has really begun to find its feet after a bloodless coup in 1995, which saw Hamad bin Khalifa Al Thani seize power from his father and proceed with a radical program of modernisation.

Over half the populace reside in Doha, a city of imperious resorts and towering mansions that scream prosperity, as people play catch up with their ostentatious neighbours in Dubai. Indeed, the IMF lists Qatar as the world’s richest per capita nation, and years of extensive development have begun to yield an urban paradise to be enjoyed.

Beyond the great capital is a great, white desert, punctuated by a few smaller settlements and the occasional clusters of tents. Yet those who inhabit them live a life far from that of the ‘noble savage’; when not clustered around a camp fire these modern Bedouin enjoy nothing more than ‘dune-bashing’ – riding great waves of sand in expensive four by fours.

There is a growing tendency within the country to play up to the classical Arabian image in order to attract the tourist dollar, but beneath the sheen this is an exceptionally modern and cosmopolitan nation that has already succeeded in attracting people from across the globe. Many business practices are rooted in Arabic traditions, but the rising influx of European, Asian and American personnel has made for a far more complex and diverse cultural landscape.

The only international airport is at Doha, with flights within the Middle East and to Paris, London, Munich, Jakarta and Kuala Lumpur. There are roads to Saudi Arabia and UAE and a few regular buses.

The public transport system in Qatar is limited, though a new public bus system is being developed. Car rental is often the best option for getting around.

Business etiquette: Greet with a handshake and eye contact. Business suits are the norm. Relationships can take time to build and third party introductions can help; there will be many social events which you should make an effort to attend.

Tipping: 10 percent, if no service charge is added.

Duty free: Tobacco and perfume for personal use. No alcohol, narcotics or pork-related products may be imported.

Safety: There is a low level of crime.

Laws: Displays of public affection may result in result.