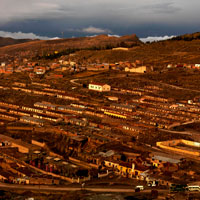 The city of El Dorado eluded generations of Spanish treasure hunters but in Potosi, founded in 1545, they found their very own Silver City. The peak that dominates the horizon is known as the Cerro Rico, or ‘rich mountain’, once said to be made entirely of silver. Even after four centuries there are still miners exploring untapped veins and the Spanish phrase valer un potosí is a popular idiom meaning ‘worth a fortune’.

The colonial architecture that adorns the World Heritage centre is an impressive legacy of a wealthy heyday that saw it grow into one of the largest cities in the world. In fact, Potosi was the 16th century’s biggest industrial complex and a powerhouse of the New World economy. Modern life has since infiltrated the high plateau on which it sits and the vivid colours of Bolivian mountain crafts infuse the old streets with new life, yet behind this facade Potosi remains one of the most authentic, striking relics of the early colonial era.
Where to stay
The Valery Hotel is the newest and most modern of the hotels in Potosi and also maintains the highest standard of service. Hostal Colonial is another good alternative, though the rooms can feel a little cosy.

Where to eat
El Meson has played host to Spanish royalty among others and is the best place to sample traditional Bolivian food; El Fogón also serves good local cuisine. 4060 has a trendy, upmarket vibe with a more international flavour.

What to see
The silver mines have a fantastic heritage and are just as fascinating now, though perhaps not one for the soft-hearted – the working conditions of the miners today are still fairly medieval. A tour of the silver mint is less hard-hitting; the twenty galleries give comprehensive coverage of the city’s history.