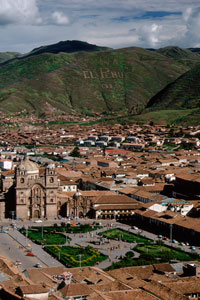 Peru has a fascinating historical legacy; home to some of the oldest known civilisations since 6000BC, it was conquered by the Incas in the 15th century before the Spanish took control in the 16th. Few places on earth is this ancient historical legacy more visible and more accessible; Machu Pichu and the Nazca lines are just two of a number of sites as impressive as the Great Pyramids of Giza.

Even leaving these, Peru is a country blessed by natural beauty. A number of Andes treks are easily accessible from Arequipa, Huaraz in the north is home to some stunning scenery and sunset over the floating islands of Lake Titicaca is one of the most breathtaking sights in the world. Alternatively, try your hand at sandboarding and kitesurfing, or soak up the sun at the seaside resort of Mancora.

Another striking feature of Peru is the way that wealth and poverty, new and old, exist seemingly side by side. The economy has seen rapid growth since the early 90s and the country is considered an emerging market, but the benefits of growth have been very uneven. Tourism operators have been known to exploit the most poverty-stricken and there can be great competition to secure the tourist dollar. Peru is a fascinating country for the traveller – but one that should be enjoyed responsibly.

International flights go to Lima from several countries. Overland travel is possible from Bolivia, Brazil, Chile, Colombia and Ecuador, though services are often unreliable and uncomfortable.

Taxis are the best within cities and relatively cheap. Buses are standard for long distance travel; fares are cheap, though buses are of varying quality and rides tend to be bumpy. Semi-regular trains link Lima, Cusco and Puno and there are some internal flights.

Business etiquette: Business meetings often start up to an hour late; visitors should be on time though. Personal contacts and networks are important as business relationships are built on trust, friendship and family.

Tipping: 10 percent of service in restaurants. Hotel porters expect around $1 per bag.

Safety: Demonstrations, protests and national strikes are common and can occur at short notice. Arequipa and Puno are particularly prone to civil unrest.

Laws: Carry your passport at all times. Export of cultural goods is strictly controlled and a licence is needed before carrying them out of the country.