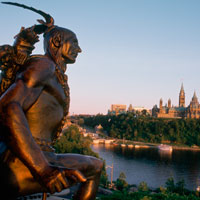 Canada may have had some bad press over the environmental implications of exploiting its vast natural resources, but its capital Ottawa remains one of the cleanest, greenest cities in the world. At the confluence of three great rivers and with an intricate series of canals connecting it to Lake Ontario and Georgian Bay, it has a wealth of waterside walks and leafy, urban parks in which friends and families alike are often seen enjoying the crisp, Canadian air.

It also straddles the divide between the French speaking Quebecois to the east and the more Anglo-centric areas to the west and south, with a surprisingly harmonious cultural cocktail of old and new world influences. It’s a city that revels in the simple joys of life – food, wine, the great outdoors – and where smiles and laughter proliferate like infectious avian diseases. You know that warm feeling of invigoration after a period of light exercise? That’s exactly what Ottowa feels like.

Where to stay
Minto Suites is one of the top choices for business travellers, with clean and spacious rooms complete with kitchen space. The Westin also has a great reputation as a conference venue and caters well for most needs.

Where to eat
Beckta is a great Canadian restaurant set in a fine Victorian house that showcases some of the capital’s most creative cooking. La Baccara has a distinctly more Gallic feel and the high class gastronomy is reminiscent of France’s finest.
What to see
The Parliamentary buildings on Parliament Hill have a neo-gothic air about their Victorian sandstone architecture; this is also close to the World Heritage Rideau Canal, which becomes the ‘world’s longest skating rink’ in winter. The Canadian Museum of Nature is a fantastic testament to something that Canada has in abundance.