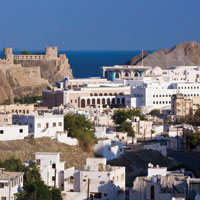 In an ideally imagined desert, towering dunes of sand ripple across a vast, desolate expanse, punctuated by only an occasional oasis of procession of goats led by white-robed Bedouin. Welcome to Oman’s Wahiba Sands and the picture-perfect interior that could have been drawn by Disney. Large swathes remain pristine and untouched, from the great rocky mountains to the dusty plains, even as the modernisation of the country’s roads brings more and more of it within reach of a four by four.

In the north-east, sandwiched between the Persian Gulf and the Al Hajar mountains in a corridor of surprising greenery, are sandwiched the major cities. Here modernity and traditionalism appear locked in battle, and beyond its impressive business district Muscat maintains its old world flavour with impeccably maintained mosques, ramparts and lively souks. To the south, Sur’s attractive corniche and old forts are trumped only by the beautiful beaches and the turtle nesting site and Ras al-Hadd.

For much of the twentieth century, Oman was cut off from the world due to the introversion politics of the Sultan. But since the accession of Qaboos bin Said it has been undergoing something of a renaissance. The economy has benefited greatly from natural oil reserves but these are due to run dry sooner rather than later and great emphasis has been placed on diversification. The industrial sector has been placed at the centre of the Sultanate’s long term development strategy and makes for an attractive investment environment in which foreign interest is actively encouraged.

Seed International, near Muscat, is the only international airport. Land crossings to Yemen, UAE and Saudi Arabia are possible but many points are regularly closed.

There are some efficient long distance buses, while shared minibuses and taxis are common for short to mid-distance travel. Most road signs are in English and car hire is a painless affair.

Business etiquette: This is a low-risk, conservative culture undergoing a period of significant change; there may be many inconsistencies in business practice. Generally, relationships should be developed before doing business. Decisions take time and high pressure tactics should be avoided.

Tipping: Service charges rarely go to the waiter; an extra tip of 5-10 percent is appreciated.

Safety: There is a very low crime level.

Laws: It is illegal to use aggressive or obscene languages or gestures in public; doing so may result in deportation.