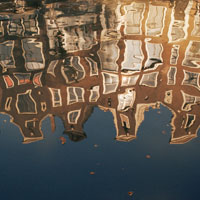 One of the world’s earliest parliamentary democracies and once the hub of a great trade empire, the Netherlands today remains one of the most liberal countries on the planet. One fifth lies beneath sea level, reclaimed by the famous dykes, while the area around Amsterdam is the most densely populated in Europe. A country of superlatives, it is also the flattest and has the highest number of bikes per capita; there are more bicycles than people.

Amsterdam is world-renowned for its tolerant culture, yet the canals, cobbled back-streets and verdant greenery also make it a truly beautiful city. Groningen is home to one of the oldest universities in Europe and comes complete with the rampant night-life that the student population demands. Hoge Veluwe National Park is not only a great place to escape but also hosts a remarkable art museum. Medieval Maastricht, situated among some of the Netherlands’ few hills, combines Roman ruins and encroaching French/Belgian culture to create a wholly different feel.

The Dutch are a conservative people, to whom privacy and appearances are both important, yet they remain exceptionally tolerant of cultural differences. The Netherlands has a long history of international trade – they are one of the biggest foreign investors in countries like the US – and business negotiations tend to be both thorough and efficient. They will want to know the credentials a company and its representatives and will take a long term view of any partnership. You should have a clear idea of where you see any business relationship going before you start negotiations.

Schiphol Airport near Amsterdam handles most international air traffic; Rotterdam, Eindhoven, Groningen and Maastricht take some smaller flights. There are ferry links between the UK and Netherlands. The European train and bus network provides links throughout Europe.

Long distances are best travelled by train while buses offer an alternative for regional travel. You’re unlikely to need a car as the network is extensive. The Netherlands is also an ideal place to cycle.

Business etiquette: Greet with a brief handshake and repeat your name. Third party introductions help but are not mandatory. Communication style is direct and ideas will be discussed opening during meetings; the Dutch are highly egalitarian and everybody is entitled to input.

Tipping: Service is included in the bill by law.

Safety: Drink spiking incidents and lottery scams have been reported.

Laws: Carry identification at all times.

Healthcare: Vaccination for tetanus required. Excellent medical facilities available, European citizens get free healthcare with an EHIC card. Non-EU may be charged and should have health insurance.