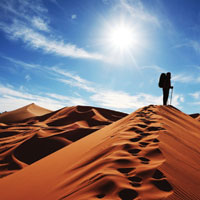 An Islamic nation with centuries of history, Morocco is a unique blend of Africa and Europe. Historical influences dating back to the Romans are still visible in the architecture. The cities of Fez and Marrakech are colourfully chaotic, dizzying and dazzling in equal measures, while the glittering coastline and the inviting Atlas Mountains are perfect for retreat.

The Moroccan people are enigmatic at times; honour and dignity are the two most important concepts in most Moroccan’s lives and they will go far out of their way to avoid shaming themselves or their family. Many things are said and done in public because it is expected; good public perception is paramount. Yet take the time to get to know them and they are full of surprises.

Travellers should take the opportunity to lose themselves in the old streets, marvel at the architecture and take in breathless public lives of the city-dwellers. Visit the bazaars, explore the souqs and dodge the salesmen trying to hook you with all manner of strange and exciting wares. When you’ve had enough, escape to the old colonial haven of Casablanca or ride a camel out into the desert to watch the sun setting over the Saharan sands.

The main international airport is Mohammed V, south of Casablanca, though there are five in total. Regular ferries travel between the Spanish ports of Algeciras or Tarif and Tangier in Morocco; there are also some routes from France. Overland, the trans-Saharan crossing via Mauritania is the most popular route; the border with Algeria is closed.

Grands taxis and petits taxis, carrying six and three passengers respectively, are best for local travel. There are train lines linking Tangier and Oujda to Marrakech, plus regular intercity buses. Road travel can be expensive but roads are well maintained by African standards.

Language(s): Arabic; though French and, to a lesser extent, English and Spanish are widely spoken.

Business etiquette: Dress smartly, though a suit is not necessary in hot weather. Greetings are important and should not be rushed. Make appointments well in advanced, though be prepared for meetings to be interrupted and also for lengthy bargaining sessions.

Tipping: 10 percent on meals. Round up to nearest 5 MAD in taxis.

Safety: Terrorist attacks have occurred in the past but are not considered a perpetual risk.

Laws: Preaching of non-Islamic religions can all lead to imprisonment. Do not consume alcohol in public places.

Healthcare: Vaccinations required for hepatitis A and tetanus. Bottled water is best. Emergency treatment is usually free and good medical facilities exist in all main cities.