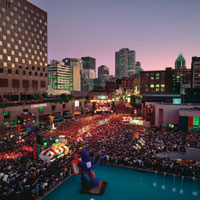 Though it is consistently rated as one of the world’s most liveable cities, Montreal has a strange relationship with those beyond its borders. The inherently Gallic heart accounts for a little over half of the population, but the historical British influences and large multicultural population have always set it slightly apart from the rest of Quebec, which in turn seems as odds with the rest of Canada.

It’s a surprisingly happy arrangement that makes for a unique and largely autonomous city that combines a rich and well-preserved heritage with a diverse and thriving modern scene. Surpassed by Toronto as Canada’s core economic engine in the mid-70s, it remains the nation’s cultural capital, with a rich musical tradition in rock and jazz and a unique arts scene that draws on French and English roots. They know how to smile too; the Just For Laughs comedy festival in July is the largest of its kind in the world.

Where to stay
The Embassy Suites may building may not be the prettiest, but the rooms are spacious and well-furnished and the service excellent down to the last detail. Loews Hotel Vogue manages to be both refined and unpretentious, with some great places to eat and drink on its doorstep.
Where to eat
Aix Cuisine du Terroir in the Place d Armes Hotel is a great French-Canadian bistro with a classical atmosphere. La Montee has a creatively-constructed menu which combines surprisingly diverse flavours to great effect.

What to see
The gorgeous park on Mont-Royal, the green hill that rises some 230m above the city, hosts a series of monuments to historic figures from Jacques Cartier to King George VI. The Montreal Botanical Gardens are a slice of heaven, while the gorgeous Notre-Dame Basilica is Montreal’s oldest church, constructed in 1656.