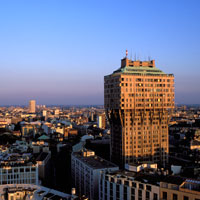 The fashion-conscious will know it as the design capital of the West, the launching pad for the visionary talents of Gucci, Armani, Prada and many more. The sports-mad will know it for its football teams, AC and Internazionale, who have produced more European Champions and World Cup winners than any other city in Europe. Art lovers will know it for the legacy of Leonardo da Vinci, the music of Verdi and the renowned performances at the La Scala opera house.

Whichever Milan you see, the creative flair and lust for life underpins everything in a city laden with a heritage that stretches back to the Roman era. Trace it through the Gothic cathedral, Renaissance piazzas and neoclassical edifices of Bonaparte’s rule, and discover hidden depths that go far beyond the beautiful people strutting and sunning themselves on paved roads and green parks. Milan is the major driving force behind the Italian economy, but in cultural terms its influence reaches much further; what they do today in the moral capital, they’ll be doing tomorrow in London, Paris and New York.

Where to stay
The Milan Park Hyatt is faultless and is in the Travellers’ Choice European Top 25. The four-star Berna Hotel is another award winner, with genuine commitment to customer service and a great location with easy transport links throughout the city.

Where to eat
Trattoria Milanese is the best of Milan’s fine Italian restaurants, serving a great seasonal menu with a fine creative flourish. Da Claudio is great for seafood that is astonishingly fresh for a landlocked city.

What to see
The Leonardo Da Vinci Museum of Science and Technology is a fascinating illustration of the history of science from the early Renaissance to modern times. The Milan Cathedral is centuries old and is the fourth largest in the world.