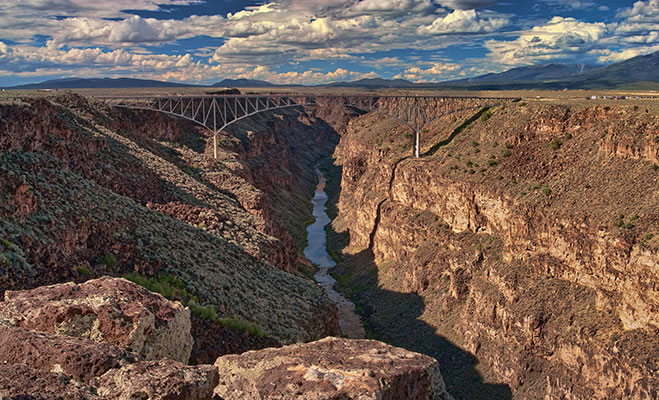 The Rio Grande Gorge Bridge, outside of Taos, New Mexico

New Buffalo was still in it’s infancy when the film was shot, just a handful of young people seeking an alternative lifestyle, living together in an adobe house they built with their own hands. The residents lived off the land as best they could, and shared whatever food and income they had. They also smoked a lot of weed.

Founded in 1967, the commune was the beginning of the peace and love counterculture movement in the US, and people were rebelling against the establishment all over the country. This was the peak of the Vietnam War, and young people were fed up. The New Buffalo Commune sprung from the same impulse that led Peter Fonda and Dennis Hopper to make Easy Rider, an attempt to break away from the American Dream paradigm that had dominated popular culture since the 1950s. However, the film is also critical of this unbridled naivety of the commune dwellers, and portrays them mainly as city kids, full of ideals, but essentially clueless about what it means to live off the land. They are seen struggling to sew their crops in the dry New Mexico soil, and generally a little incompetent.

No Buffalo
Hopper, as the director, really wanted to film at the commune itself with the residents playing their parts, but they were not keen on it. So instead they replicated the commune setting in the Malibu hills in California.

New Buffalo existed until 1985 in relative stability in the same site, attracting young hippies and idealists from up and down the country. It eventually collapsed under its own weight, but in 2001 the farm was restored and now works as a kind of bed and breakfast. The ‘New Buffalo Centre’ has a website in pastel colours with pictures of tidy rooms that reminisce a retirement home, and for a ‘financial contribution’ visitors can partake in some of the many activities offered; from performances to a ‘healing space’. It seems like a weirdly sanitised version of what commune life was supposed to be, but it might be worth a stop.

Drive into Taos, New Mexico on route 64. It winds from Monument Valley down through Carson National Forest and then to the town. But about ten miles before the route rides into Taos, it crossed the famous Rio Grande gorge. The gorge is a spectacular site, a gigantic crack in the middle of the desert, but connecting the two sides is a spectacular steel bridge, suspended 565 feet above the Rio Grande below. The bridge spans 600 feet across the gorge.

Pennines in the desert
A little know fact about this part of New Mexico is that it is the final resting place of quintessential Yorkshireman DH Lawrence. For some bizarre twist of fate, Lawrence moved to a ranch outside of Taos with his wife Frieda shortly before the publication of Sons and Lovers. They only lived in Taos briefly, and he eventually succumbed to one of many ailments he had battled through life while living in France in 1930. His wife, who outlived him, eventually had him exhumed, cremated and brought his ashes to the New Mexico ranch, where she lived until her death some two decades later. During shooting, the cast and crew clandestinely camped by the DH Lawrence Memorial, where his ashes are supposed to be mixed in the large memorial stone, or so it goes.

Taos itself, though not really in the film, is an interesting historic town. It is surrounded by old Pueblos that are open to visitation, and has an interesting alternative art scene. But Billy and Wyatt do not linger here long, but rather take route 518 through Santa Fe National Forest to Las Vegas New Mexico, where they crash a band parade. Parading without a license is still an offense in New Mexico, but it is unlikely you will be thrown in jail, which is just as well because the jail scenes were actually shot in Taos, and Jack Nicholson will probably not be available to bail you out.

The other Vegas
Las Vegas is the type of town that doesn’t look like it has changed much since the railway arrived in 1880. The buildings are charmingly old fashioned, but well conserved, and it really seems to always be sunny. Many of the buildings featured in Easy Rider are still there, though the police station is now a restaurant. The red fire department building where the Harley’s are impounded is still there though, exactly the same, with the same sign out front.

Here Wyatt and Billy pick up drunken civil liberties lawyer George, and convince him to join them with a promise of ‘porkchop’ ladies and the ‘finest whorehouse in the South’.

Next week: the ghost towns of the Deep South