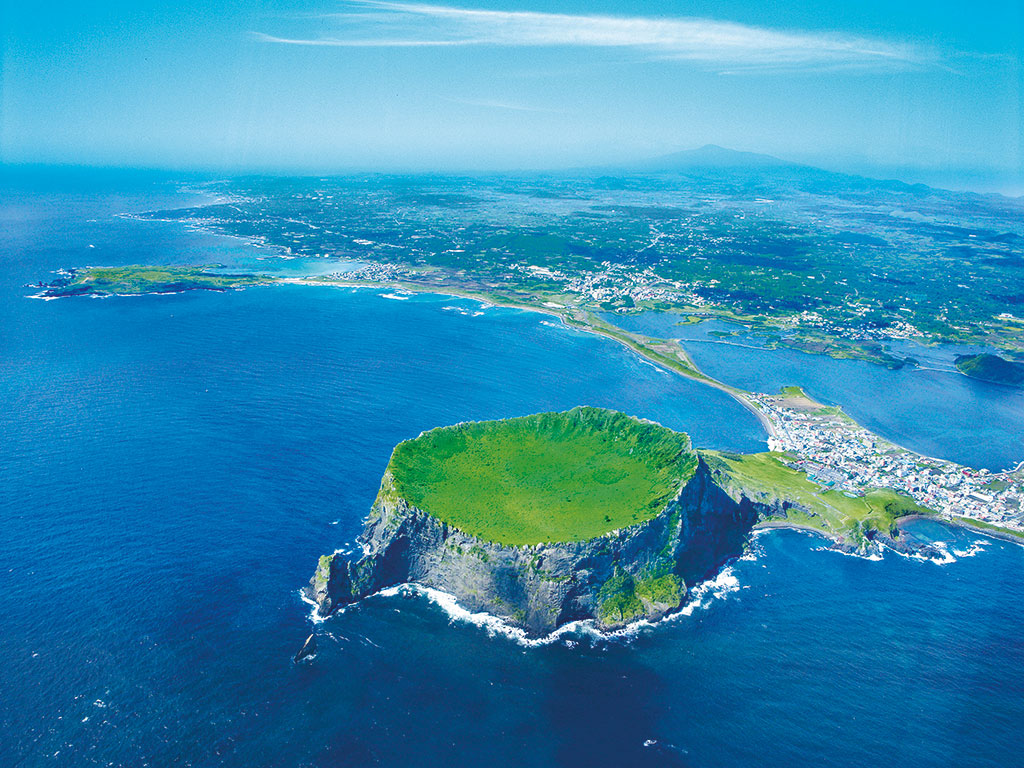 Seongsan Ilchulbong, or Sunrise Peak, is one of Jeju's most popular natural sites

The island region of Jeju has a list of impressive titles against its name: as the only location in the world to be recognised as a UNESCO World Heritage site, biosphere reserve and a Global Geopark, in addition to being one of the New7Wonders of Nature, the fascinating island off the coast of South Korea is certainly brimming with things to be proud of.

Beyond the outstanding natural beauty for which it has become famous worldwide, Jeju is also an international free destination: the fact that visitors from over 180 countries do not require a visa for trips under 30 days means that business travel to the region has skyrocketed in recent years. As such, the island has now been recognised by the Union of International Associations (UIA) as a top international destination for MICE events, as well as being voted the Best Destination for MICE, Asia in the Business Destinations Travel Awards 2015.

From the mainland
The rapid growth of the island’s MICE sector has contributed to considerable economic progress and increased stability across the region. Boasting a modern airport with 27 regular international routes, Jeju is now easily accessible from Beijing, Shanghai, Tokyo, Osaka and Seoul, among others. The island’s strong – and growing – connection to the rest of the Asian continent has contributed to its draw as a business destination, encouraging international visitors to come and sample Jeju’s fantastic sights in between meetings and conferences. With its combination of incredible scenery, world-class convention facilities, five-star accommodation and a burgeoning tourism industry, it is unsurprising that the island’s inbound numbers are continuing to rise.

The island’s main convention centre, the Jeju International Convention Centre (ICC Jeju), is a specialised, resort-style hub with a wide selection of facilities, spaces and event rooms. Having recently renovated its facilities to make them eco-friendly, ICC Jeju has procured an impressive and wide-ranging catalogue of clients by helping to produce truly world-class events. Just some of the high-profile events that have been hosted by ICC Jeju since its inauguration include Asia Development Bank’s annual meeting of the board of governors in 2004, the Pacific Asia Travel Association annual conference in 2004, the American Society of Travel Agents’ destination expo in 2007, United Cities and Local Governments’ world congress in 2007, the World Scout Conference in 2008, the ASEAN-KOREA Commemorative Summit in 2008, and the KOR-JAP-CHI Trilateral Summit in 2010.

Boosted profile
The speed with which the island grew into a dynamic destination for meetings and events was in part fuelled by the creation of the Jeju Convention and Visitors Bureau (JCVB) in 2005. However, the natural beauty of the island and the variety of attractions on offer are the real draw for business and leisure tourists alike, and with this in mind JCVB is able to tailor each of its MICE tours to the customer’s individual needs.

Recognising that customer satisfaction is more important to the MICE industry than it is to perhaps any other, JCVB works to promote the island’s most exciting and unique assets in order to keep its guests happy and its status as a top MICE destination in good standing. And, while Jeju’s visa-free status alone lures thousands of travellers every year, there are many other key features that the bureau is keen to bring to the world’s attention.

Boasting more than 30,000 hotel beds across the island, including those of 16 five-star hotels, Jeju guarantees an enjoyable and luxurious stay for each and every traveller. The island’s compactness means that a variety of locations are on offer – from beachfront resorts to spacious city centre apartments – all within easy reach of the region’s airport and conference and meeting facilities. Events of any size – from small, one-day conferences for local businesses to week-long international conventions – can be accommodated in Jeju, which boasts a wide range of venues and a selection of distinguished facilities.

For after office hours, however, the island offers once-in-a-lifetime experiences and activities for visiting delegates, ranging from visits to its UNESCO World Heritage sites, Seongsan Ilchulbong and Geomun Oreum, to enjoying marine sports on its stunning coastline. The island itself has long been recognised as one of the world’s foremost leisure destinations, but with JCVB’s focus on bringing MICE to the centre of the region’s tourism industry, Jeju is slowly growing into something much more impressive than a mere beach destination.

Welcoming visitors
Charged with setting Jeju apart from the rest of the world, JCVB works to preserve the island’s natural beauty while continually improving and developing its business facilities. With the chance to swim in the pristine turquoise ocean one moment and then attend a meeting in a resort on the slopes of Mount Halla the next, visitors to the island are able to fully appreciate the diversity of Jeju’s offerings; something that makes it truly unrivalled in its credentials as a MICE destination.

The wellness industry is also booming on the island, with Jeju’s own natural minerals, local produce and water utilised across the region’s health and wellness centres and spas. There are also plenty of golfing facilities across Jeju, allowing business travellers to enjoy a relaxing game with colleagues after meetings have concluded for the day.

2015 in particular was a significant year for JCVB. Marking the bureau’s 10th anniversary, last year acted as a celebration of what the organisation has achieved in terms of promoting Jeju to the world and transforming it into one of the world’s leading business and leisure destinations. Having developed a range of first-rate support programmes, one-stop information services and unique marketing activities, JCVB’s successes are in the dozens.

Throughout all of these projects, however, its professionalism and industry expertise have prevailed above all else, being the true cornerstone of every project. As a result of its passionate approach to event management, each and every visitor receives individual support and relevant information during their stay. JCVB now successfully hosts over 200 international and domestic events every year, including the International Union for Conservation of Nature’s World Conservation Congress in 2012. In 2013, JCVB was named as the seventh best convention city in Asia by the UIA, as well as the 19th best in the world.

Though several notable goals have already been achieved, the organisation is not resting on its laurels. JCVB continually works to improve its integrated support system, allowing it host and promote more international events with even greater efficiency. The bureau is also currently developing its unique Jeju MICE card: this card is designed specifically for business travellers visiting the island, making it easier for them to use public transport and offering discounts at certain shops, restaurants and tourist sites. Guaranteed to make travelling even more convenient for international businesspeople, the Jeju MICE card is expected to further bolster the island’s tourism industry.