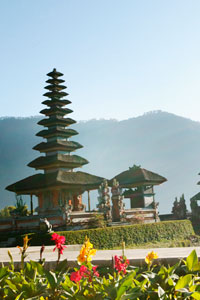 This vast archipelago sprawls across 5,000km of the equator, with 17,500
islands and 300 distinct ethnic groups descended from Chinese,
European, Indian, Malay and indigenous stock. There are 742 known
languages, yet the common Bahasa tongue and shared education have built a
strong common national identity. Parts of Indonesia remain unexplored
and new species are still routinely discovered there, making it a
tropical paradise for the intrepid.

Stroll on perfect, peaceful
beaches at Paula Weh and go diving amid a diverse and rugged underwater
landscape. Trek to the Buddhist monument of Borobudur on its spectacular
pinnacle, with a 360 degree panorama of four volcanoes. Immerse
yourself in tribal Papua in the Baliem Valley, reminiscent of a lost
world. Enjoy yourself in the refreshing night-life and cultural
pleasures of Bali or go surfing in the blue seas of Lombok.

The
archipelago is constantly evolving; the 2004 tsunami and subsequent
reconstruction have instigated change in many areas, while the constant
clash of old and new, east and west stir things elsewhere. Indonesia is a
G20 economy with a GDP of nearly $1trn, but in places it can appear
like thousands of years of history have simply never happened.
Getting
there

There are numerous international airports; the main
gateways are Jakarta and Bali. Land journeys are possible from Malaysia,
Papua New Guinea and East Timor, but visas are required before reaching
the border. There are limited ferry links from Malaysia and the
Philippines.

Getting around
There
is an extensive domestic air network, though boat and bus travel remain
the mainstays of the public transport system. Trains are restricted to
Java and Sumatra. Renting a boat is straightforward and a good way to
island-hop.

Local information
Language: Bahasa Indonesia
Time: UTC+7 to UTC+9
Climate: Tropical. Hot and rainy all
year round. Temperature: Max: 32°C (September)-23°C Min (August).
Rainfall: Max 300mm (January-February), Min: 40mm (August)
Currency: Rupiah (IDR)
Business etiquette: Dress in light but
conservative clothing. Business dealings should be conducted through an
agent. Business cards are important and should be treated with respect;
give or accept using two hands and give them due attention.
Tipping: Tip according to preference.
Duty free: 200 cigarettes or 50
cigars or 100g tobacco; 1l liquor; A reasonable quantity of perfume;
gifts to $250.
Safety: Beware
of local spirits that may contain harmful substances.
Laws: Carry identification at all
times. Serious crimes, including some drug offences, attract the death
penalty. Gambling is illegal. Some aspects of Sharia Law have been
implemented in Aceh. Indonesian or international licenses are required
to drive.
Healthcare: Vaccinations
required for diphtheria, hepatitis A, hepatitis B, tetanus, malaria,
tuberculosis and typhoid. Doctors and hospitals expect immediate cash
payment. Services outside cities are poor. Health insurance is essential
and should include emergency repatriation.
Socket type: Type C