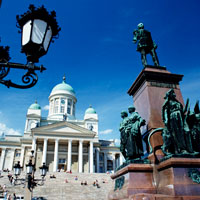 The near-Arctic wilderness of Finland is not the first place you’d look for a high-tech capital of industrial design, but Helsinki is just that. Perhaps its something in the clean, Baltic air; more likely its the tap water, which is so pure that its bottled and sold thousands of miles away in Saudi Arabia.

This is a city where fashion is daring to be different, not following the crowd, and entertainment is less about glamour than fun. Art Nouveau columns cling to colourful terraces and conceal retro thirties restaurants with tongue firmly in cheek.

There’s a great deal of both past and present here, as traditional Finnish culture collides with the wider world beyond in a city that has long been a gateway between the two. That is down to the spectacular natural harbour carved out of the spectacularly knotted coast; if you approach the city by ferry then that first stunning glimpse of the waterfront is an image that sits long in the memory.

Where to stay
Hotel Glo is comfortable, clean and quiet, with free wifi in rooms among other facilities and professional, business-like service. Hotel Haven is a cosy and luxurious without being pretentious and has a great location on the historic waterfront.
Where to eat
Chez Dominique is one of the two Michelin-starred restaurants in Finland and widely regarded as the best in the country. Ravintola Nokka is another Mecca for Finnish foodies, famed for its traditional menu featuring home-grown produce and fresh game.

What to see
There are still around 900 inhabitants and a military academy on the World Heritage Suomenlinna Sea Fortress, built on a series of small islands protecting the harbour. The Church in the Rock, carved into the side of a cliff, is another of Helsinki’s most impressive sights.