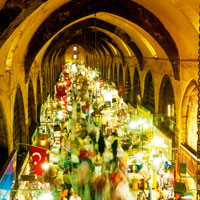 While Europe struggles to keep head above water, the cultural and financial advancement of Turkey is still on track. Combining history and tradition with modern, western influences, Istanbul is carving out a distinctive niche for itself. With its abundance of worthy art galleries, top hotels, bars and restaurants, and shopping to rival that of Paris, London or New York, the city is rated highly among the cosmopolitan jet set brigade.

In terms of the cityscape itself, Istanbul is looking in better shape than ever having undergone a major restoration programme in preparation for its serving as the European Capital of Culture last year. All types of sites and attractions benefitted from the makeover, spanning city squares, fountains, bazaars and key landmarks such as Topkapi Palace.

A contemporary art scene
Istanbul has always been an epicentre of historical art, but the contemporary art scene of the city is certainly shaping up, too. In the past decade, the number of art galleries has exploded from half a dozen to over 200. One of the major establishments, if not the most recent, is Istanbul Modern. The gallery is of such respectable calibre that it’s fit enough to give the international competition a run for its money – it hasn’t been compared to London’s Tate Modern for nothing. Mixing local names and world renowned talent, featured artists include home grown notables such as Gulsun Karamustafa and globally recognised heavyweights like Anish Kapoor. While worthy art collections are the establishment’s main call, the museum has also done a decent job with its restaurant, which has become a popular haunt in its own right, owing both to its spectacular Bosphorus views and good selection of bistro-style dishes.

Boosting the burgeoning art scene further, Art Expo Istanbul 2011 is one of many local platforms that provide opportunities for young artists. Organised by the Istanbul-based organisation, International Art Centre (IAC), the latest exhibition brings together the work of about 100 local and international artists from 23 countries, many of which are lesser-known names such as the Turkish, installation based talent Ekin Onat von Merhart.

Initially, the 220-piece exhibition was showcased at the IAC gallery in the district of Baglarbasi; thereafter, a select number of works travelled to Izmir to form part of Izmir Biennial that ran in May 2011. Touring further afield yet, the exhibition will head to California in August.

Yet another notable art event to add to the list, the sixth edition of Contemporary Istanbul will take place from November 24-27 this year; its chief aim being to promote the cultural and artistic life of Turkey.

The retail terrain
As a parallel movement to the flourishing art and culture scene, the fashion and retail landscape of Istanbul is equally healthy. As a reflection of the city’s ramped up fashion status, Conde Nast launched Vogue Turkey last spring, and global brands are fighting to secure a good retail spot in the city. Spanning the entire retail spectrum, the shopping hub that is Beyoglu is brimming with high street names such as Benetton and Mavi Jeans, while the streets of upmarket area Nisantasi are lined with stores by Prada, Balenciaga, Louis Vuitton et al Nisantasi is also home to the department store, Beymen, which is comparable to London’s Harvey Nichols and stocks the wares of international big wigs such as Balmain, as well as local talents including Turkey’s own queen a la mode, Bahar Korcan. Blender, meanwhile, is the name of Beymen’s little sister store. In true concept store style, the shop complements its varied fare of fashion and lifestyle goods with the surprising element of a charcuterie.

Alongside the mushrooming colony of standalone stores, Istanbul also houses a vast number of shopping malls. With one monster shopping mecca springing up after another, the destination is something of a mall head’s (could replace with ‘mall aficionado’) paradise.

On the concept store front, Istanbul is on a roll, too. Fashion-forward and well-respected among the style elite, independent multi brand designer shops such as Paristexas and Midnight Express are often mentioned in the same breath as awe-inspiring players such as Collette in Paris and Dover Street Market in London.

Old-worldy Istanbul
Keeping track of the latest developments in Istanbul is indeed worthwhile, but don’t overlook some of the best haunts with traditional value and historical significance.

Basilica Cistern
Fascinating and eerily romantic, the Basilica Cistern, is believed to date back to just after the Nika revolt in 532 AD. Featuring over 300 columns, a couple of which are supported by large medusa heads, the underground waterway was used as a reservoir for water storage for the Topkapi Palace, among other key buildings in the city. This is indisputably one of the most intriguing attractions in Istanbul, and we can’t recommend a visit highly enough.
Basilica Cistern, Yerebatan Caddesi 13, Sultanahmet

The Booksellers’ Bazaar
Despite being something of a tourist trap these day, The Booksellers’ Bazaar is still worth a visit. Dating back to Ottoman times, when printed books were considered a corrupting European influence, only hand-lettered manuscripts were sold until 1729, when the first book in Turkish was published. Fast-forward to the present day, books of all types are sold at the site, including text books, coffee table volumes and framed calligraphy.
The Bookseller Bazaar, West of Çadırcılar, in Sahaflar Çarsısı Sokak

Inci Pastanesi
Out of all the sites and attractions of Istanbul, as far as local experiences go, not much can beat a visit to the hole in the wall institution Inci Pastanesi. Established in the 1940s, Inci Pastanesi dishes out the best profiteroles in town, generously smothered in thick chocolate sauce. Turkish men clad in blue uniforms work intensely behind the counter to serve their local regulars, many of whom eat their addictive treat quickly standing up. Sadly, Inci Pastanesi might be forced to close in the near future, to allow space for a yet another shopping mall.
Inci Pastanesi, Istiklal Caddesi 56, Beyolu