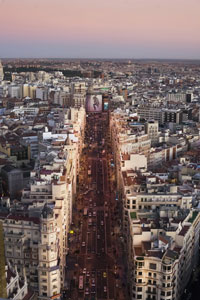 The capital city of Spain is often overlooked in favour of its coastal cousin Barcelona – but with its colourful nightlife, world class galleries and fantastic restaurants Madrid should not be missed.

The city still feels very Spanish and retains its own identity rather than feeling as though it is awash with tourists and international business. Away from the main squares it’s easy to find yourself in a traditional bar, practising your Spanish and eating delicious tapas with your beer. The tapas in Madrid is a real revelation as it is completely free with every drink you buy.  From bowls of paella, to tortilla, to brushetta – you just know that a packet of crisps and some peanuts really won’t cut it next time you’re in the pub!

If you can drag yourself away from the bars and the tapas there are also some excellent restaurants in the city. Madrid is located right in the centre of Spain, which gives the city access to the finest regional produce across the country. From the best cured hams and meats, to delectable cheeses and flavoursome peasant dishes with a modern twist, eating out in the city is a real treat.

One thing to note in Madrid is that they seem to operate a few hours later than the rest of the world and survive with very little sleep. Lunch seems to finish at about three and dinner doesn’t start until nine, which means if you plan to hit a few bars and then a club afterwards you won’t be getting home much before 5am. There are plenty of bars and clubs to choose from whether you’re into indie or house music or simply want to sip cocktails in the latest hangout.
On the way home make sure that you indulge in some late night fast food Madrid style. Locals don’t get a kebab on the way home instead they go to the Chocolatería San Gines to pick up churros (a type of battered dough) to dip into a devilishly thick hot chocolate.

Culture vultures will have plenty to keep them occupied during their time in Madrid as the city boasts some of the finest art collections in the world. The Prado is the most famous of the galleries and includes collections from the Spanish greats; Goya, Velázquez and El Greco. The gallery also has an impressive collection of Medieval and Renaissance works from the likes of Fra Angelico and Titian.

Other historical sites to see include the Palacio Real or The Royal Palace which is open to the public and also has a stunning view over the canal and a visit to the Plaza Mayor, Madrid’s central square. The Reina Sofia gallery should also be on the list as it houses one of Picasso’s most iconic paintings Guernica.

Madrid is not only a great place to visit for a short stay it is also the ideal place to start a longer trip. The city has excellent transport connections to the rest of the country via coach or train. Or if you are feeling really adventurous why not stop off in Madrid on the way to South America?

Air Europa flies direct from London Gatwick to Madrid twice daily from just £46.70 one way. From there you can take connecting flights to the rest of Spain, The Balearics and The Canaries or you can fly to South America, The Caribbean or the USA. Air Europa offers flights to Buenos Aires from London Gatwick via Madrid from £609.10 return, while flights to Caracas start from £516.50 return. As a scheduled airline economy flights include great extras such as an ample 23kg of baggage per person. The airline also has one of the world’s most modern fleet of planes.

For more information go to www.aireuropa.com or call Air Europa’s reservation team on 0871 423 0717 for a personalised service and instant seat confirmation.