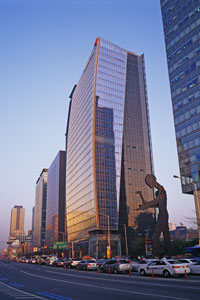 It is said that New York is the city that never sleeps. That may be true, but it has an Asian rival in Seoul. This city not only never sleeps, it never even relaxes. With a lively, bloody past and decades of aggressive economic growth, you would think that Seoul would be feeling now is the time to take a long, deep breath and maybe even a nap. But no, it continues to grow and reinvent itself and consolidate its position as one of the most important cities on the planet. It may lack the sleek beauty of Tokyo, the sheer hedonism of Hong Kong or the safe-as-houses feel to Singapore but it has bundles of character, vibrancy and a distinct culture that is refreshingly overpowering. Although much of the city has been bulldozed and rebuilt, there are echoes of the past in the form of temples, palaces and hanoks (traditional houses) that are sprinkled throughout the cities gleaming high-rises.

Seoul’s ascendancy to become one of the most important places of business on earth is astonishing. The Korean War left the city in ruins, but a determined rebuilding and regeneration programme during the 1960’s and 1970’s coupled with a tough economic policy meant that by the time the 20th century was drawing to a close, Seoul was firmly established as an economic powerhouse. Although the economy has periodically dipped and wobbled and looked on the verge of collapse, both the present and the future look very secure indeed. It is home to some of the world’s largest corporations (Samsung, Hyundai, Kia and LG among them), has the fourth highest GDP in Asia, and was considered by Forbes last year to be the sixth most economically powerful city in the world. The proximity to Beijing and Tokyo – both are around a couple of hours away by air – mean that Seoul is quickly building a reputation as the most important and used travel hub in the region. Such a reputation is made easier to uphold when you have Incheon airport nearby, voted the world’s best airport three years in a row by ACI (the Airports Council International).

It’s little wonder then that Seoul is becoming increasingly popular with business travellers and those in the know. It’s always been popular among westerners teaching English to the Koreans and, with a huge army barracks in the city, with US soldiers, but the government is making huge strides forward in bringing tourists and business people to the area. Not that this has diluted the atmosphere at all. Seoul can appear confusing and brash and noisy, but peel back those layers and a friendlier, more serene Seoul will emerge. Rather surprisingly, the city is in the process of reinventing itself yet again, this time as an ecologically sound destination. Pollution has been a problem here due to industry, climate and geographical location: the surrounding mountains mean that much of the polluted air doesn’t get the chance to escape. That 10 million people live in the city and a further 10 million in the wider metropolitan area doesn’t help too much either. The government, however, is focussing on creating more parks and green spaces and the catalyst for this change was the regeneration of the Cheonggyecheon stream.

Lying under concrete roads for decades, the Cheonggyecheon stream came alive again in 2005 as part of a $900 million project. The 6-km long stream affords much needed relief from the buzz of the city and exists 15 foot below street level. It has brought affluence, tourists and 90,000 locals a day to the area. It’s brought plenty of animals too: the new ecosystem is reckoned to have introduced dozens of new fish, bird and insect species to the area. It’s also brought about a shift in attitude. At the time of opening, Lee In Keun, Seoul’s assistant mayor for infrastructure, said: “We’ve basically gone from a car orientated city to a human orientated one”.

If you’re visiting this human-orientated city for the first time, business practices may seem a little, well, foreign. There are a few things to bear in mind and perhaps one thing to practice, even master. That thing is the use of chopsticks. Business meetings will often be conducted over lunch and knives forks will often be notably absent. You might also be introduced to floor seating where you must take off your shoes, so remember that threadbare socks with holes in them don’t really cut it. Remember too, that alcohol is considered integral for bonding between business associates. More often than not, such lubrication will lead to one of Seoul’s most popular pastimes – karaoke. In such circumstances it’s best to swallow your pride and heartily belt something out rather than refuse to join in – Korean people don’t like to lose face. Even though English is studied religiously and widely spoken in business circles, it might be an idea to learn a few local words and phrases too. Your efforts won’t go unnoticed.

Disorientating it may be, but if you take your time Seoul is easy enough to navigate. Taxis are cheap and plentiful and the underground system is fast, clean and efficient with signs and announcements in English. Hiring a car and driving around the city is not recommended, unless you are particularly fond of traffic jams, stress, and getting lost. Better to walk and enjoy the tea rooms, the saunas, the labyrinthine alleyways, opulent palaces, modern-as-hell skyscrapers, smoky barbecues and an exhilarating atmosphere. An atmosphere that is constantly changing, yet, at its heart, forever remaining the same.

Korean DMZ
Slicing the peninsula virtually in two, the Korean DMZ (Demilitarised Zone) is roughly 155 miles long and 2.5m wide, and acts as a buffer between North Korea and South Korea. Lying to the north of Seoul, the DMZ has been the scene of high-profile skirmishes over the last 50 years, though things have got better. Day trips are fascinating – you’ll get the opportunity, albeit briefly, to step foot on North Korean soil. Rules for visitors are: surrender your passport and dress smartly – flip-flops, shorts, t-shirts and denim will stop you getting in.

When to go
Seoul is bitterly cold from December to February but the snow makes it popular with skiers and snow-boarders and makes the place a treat to look at. It’s an idea to avoid late June and July which is the wet season and sees 60 percent of the annual rainfall. August is pretty muggy. Spring and Autumn then, are probably the best times to visit: September and October are still sunny and the city and surrounding areas are bursting with colour.