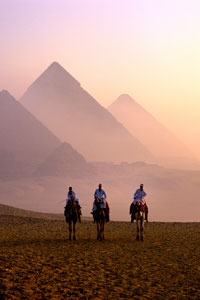 Cairo, a city where traditional bazaars nestle beside neon malls, where overcrowded slums border lavish neighbourhoods, has long captured the imagination of adventurous travellers. It is commonly dubbed the ‘city of a thousand minarets,’ and the skyline is perfectly crowded with them: short ones, tall ones, double-headed ones and even quadruple ones sprout around the domed mosques that crowd the frenetic, congested streets.

A chaotic, crowded metropolis teeming with traffic, Cairo elicits all but indifference from its visitors. It is a glorious beacon of history and culture, interweaving influences from Turkish, French and British colonial rule. In modern times the city has become an anchor for film, music and pop culture embraced across the Arab world.

It can take a lifetime to properly explore a city, but visiting with just a weekend to spare – that would be Friday and Saturday in Egypt – can still be a rich experience. The weekend starts quietly: locals sleep late on a Friday, and the call to noon prayers are the quietest of the week. The normally overwhelming traffic is temporarily subdued, presenting the best opportunity for visitors who, despite themselves, are intent on visiting the Giza Necropolis. Just 15 miles southwest of Cairo city centre, the trip is a stunning cliché and tourist trap, but for perfectly understandable reasons: the Great Pyramid is the last remaining Wonder of the Ancient World, and although its height of 139m is scarcely anything compared with today’s skyscrapers, its sheer bulk (nearly six million tonnes and 2,500,000 cubic metres) is overwhelming.

Returning to the city for lunch, the century-old Cafe Riche in the downtown neighbourhood provides an entertaining lesson in modern history. Its basement was a meeting point for resistance members during the 1919 Revolution against British occupation, and is now a popular hangout for many of the city’s intellectuals.

Downtown Cairo is well worth an amble. Its 19th and early 20th century boulevards and buildings were once home to Cairo’s elite, unfortunately now sullied after years of neglect; however they remain home to several French-inspired architectural gems. Downtown also offers culture buffs an interesting shopping experience, with rare books, lithographs, maps and other authentic collectables on sale.

In the evening the Nile’s many feluccas – traditional wooden sailboats, available for hire for less than $20 an hour – provide a tranquil moment to enjoy the lights of the city. A good place to board one is on the riverside boulevard, the Corniche, in front of The Four Seasons Nile Plaza hotel.

Unlike the more oppressive scene in Dubai, where nightlife options are restricted to – albeit luxurious – ex-pat and tourist venues, Cairo offers destinations with more local flair. Seqouia is an open-air restaurant right on the Nile in the Zamalek district: built like a modern tent with a white marquee, canopies and upholstery, it serves Mediterranean cuisine and traditional Egyptian dishes, with water pipes available for smokers and the culturally curious.

Just a 10 minute walk from Seqouia is the glitzy Aperitivo, a bistro-lounge that opened last year. Adorned with crystal chandeliers, leather upholstery and funky artwork, it’s the ideal venue to sip creative cocktails and experience the glamorous side of Cairo. Or for a more local experience, downtown’s Arabesque – a recently refurbished oriental style bar-cum-dancing-hotspot – is a popular hangout for Cairo’s young crowd. A belly-dancer performs every Friday, but it does get very crowded. Right next door is the After 8 bar, which offers live music and DJs well into the wee hours.

After a much-needed lie in and healthy breakfast, the following day can be almost entirely absorbed by exploring Egypt’s religious heritage. Coptic Cairo is a good starting point: it is home to the intricately designed Hanging Church, which holds some 110 ancient and medieval religious icons. The district is also home to the Ben Ezra synagogue. Originally built in the 4th century as a church, it was turned into a synagogue five centuries later. Legend has it the synagogue was built near the spot where Pharaoh’s daughter found baby Moses.

Islamic Cairo is just a short drive from the Coptic quarters and is brimming with mosques and other monuments.

Begin with Ibn Tulun mosque, named after the founder of the Tulun dynasty that ruled Egypt in the late 9th century, and Al-Rifai mosque, now the burial spot of Egypt’s King Farouk and Iran’s Mohamed Reza Shah Pahlavi. A must-see in Islamic Cairo is the renowned Citadel, a 12th-century bastion built to protect Egypt against the Crusaders.

Also there is a grand mosque built by Muhammad Ali Pasha, Egypt’s Ottoman ruler throughout the first half of the 19th century.