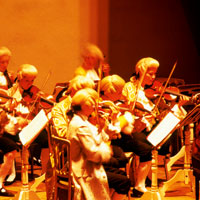 On the banks of the Danube, Vienna and its population of over two million people bask proudly in their cultural heritage. Vienna’s love affair with the arts stretches back centuries and helped make it today, Austria’s number one tourist attraction.

A romantic imperial city, Vienna bears the hallmarks of a capital steeped in history, beautifully contrasted by its modern infrastructure. A city of music, Vienna was home to some of history’s greatest composers. Mozart, Beethoven, Schubert and Strauss were all proud to call Vienna their home.

Vienna’s musical heritage has been preserved to the present day. The Vienna Boys Choir is ever popular and the Wiener Philharmoniker remains a world class orchestra. But it’s not all about classical music. Vienna boasts a vibrant nightlife that compares with the best, catering for folks of all ages, young and old.

Historically a city of culture, Vienna boasts many talents amongst its repertoire. Whatever the time of year, you can be certain the city has plenty to offer.

A theatre break is always a rewarding experience; witness the latest film and dance productions or just sit back and soak up the best of classical opera. A vast array of concerts and exhibitions are held throughout the year.

If you just want to relax and idly watch the world go by then make a beeline for one of Vienna’s many coffee houses. Take the weight off your feet and exchange thoughts of the day with your fellow coffee connoisseurs.

For those in need of something a little stronger, a visit to one of the city’s wine taverns will have you unwinding in no time.

Historical charm
Throughout history, Vienna has embraced the world of art and proudly boasts many of its own world famous artists. Through the centuries, kings and queens of Austria were passionate art collectors, rendering Austria – and Vienna in particular – a treasure trove of fine art.

Many of these masterpieces can be seen at the Museum of Fine Arts; a magnificent building exhibiting works from across the world, in particular that of its favourite sons.
Indeed, art and literature feature predominately during Vienna’s history. Underground railway stations designed by Otto Wagner are listed properties; coffee house literature is digested by both young and old.

Wherever you stay in Vienna, historical landmarks are never far, many dating back to medieval times.

Set in beautiful grounds, Belvedere Palace is a magnificent example of Viennese architecture. Designed by the famous Baroque architect Von Hildebrandt, the fabulous palace was originally built for Prince Eugene of Savoy.

Besides their love of the arts, the Viennese love to shop. Markets are scattered throughout Vienna but most popular is the Naschmarkt. Dating back to the 16th century, everything from children’s shoes to apples can be purchased. If you can endure the crowds, bargains are aplenty.

Indulge in the fun and games at the Prater, Vienna’s biggest funfair. If the noise and crowds become too much, escape to the open fields or take a stroll through the adjacent forest and chill out with the wildlife.

For spectacular views of the city head for the Danube Tower, known locally as the Concrete Needle. The tower is over 350 meters high; with your head in the clouds, Vienna never looked so good.

Vienna was once home to Habsburg Empire. The Empire is long gone, but Vienna remains rich in Imperial history and there are many historic attractions to be seen throughout the city and you’ll find that many of the narrow medieval alleyways, cobbled lanes and imperial squares have survived the centuries.

City delights
Many ancient monuments can be found throughout the city. The Schonbrunn Palace and the Imperial Palace (Hofburg) are a treat to behold. The Imperial Treasury is a must see when you visit Vienna. The Imperial Furniture Collection is also a popular stop for visitors to the city. If you walk along the Ring Boulevard you will find examples of stunning majestic architecture.

Make sure to visit the Stephansplatz in the heart of the city where you can see the cathedral’s tall spire. You are able to climb to the top of the spire and despite the effort, it is well worth the stunning view of the whole of Vienna and some of its countryside that you will be rewarded from the top. Parliament and the aquarium zoo are other sites that may interest tourists to Vienna.

There are a variety of accommodation options in Vienna and tourists should be able to find accommodation to fit any style or budget. You can find beautiful five star luxury hotels and if these are beyond your budget you can choose to stay in a reasonably priced pension or bed and breakfast. Apartment-hotels are a popular choice in Vienna as they provide extra space and privacy with a fully equipped kitchen. Rental apartments are also available, ranging from luxury apartments to smaller, cheaper ones.