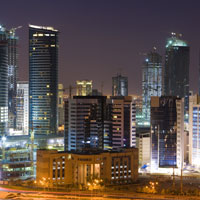 Located halfway along the western coast of the Arabian Gulf, the State of Qatar acts as a bridge between the east and west, welcoming visitors from around the world. At the crossroads of economic, cultural and natural heritage, the country’s strategic location has attracted visitors to the region for thousands of years.

With sandy coastlines and islets, reefs and salt flats, and sprawling dunes in the south, the small peninsular-nation offers as much natural beauty as it does cultural richness. Qatar’s 560km coastline means it has always been a community focused on the sea. Once a centre for the fishing and pearling trades, today Qatar’s overwhelming hospitality to travellers is shaped by its age-old sea oriented traditions. Highlighting its authentic heritage and rich past, while instilling pride in its future, Qatar is a centre of both tradition and innovation.

The discovery of oil in the 1940s and natural gas in the 1970s gave rise to Qatar’s exponential economic growth. With the third largest gas reserves and the largest non-associated gas field in the world, Qatar became the world’s largest exporter of liquefied natural gas in 2006, exporting to the US, Europe and Asia. However, Qatar’s economy has diversified significantly in recent years, with progress in construction, tourism and education – supported by governmental work to minimise the impact of the global economic downtown – ensuring relative stability.

Today Qatar is leading a surge in interest in the Arabian Gulf. Although conveniently accessible via a short flight on most international carriers, including the five star flag carrier Qatar Airways, the state’s unique atmosphere makes it feel much further from the beaten path.

Developments in Doha
Reputed for quality and excellence, Qatar is recognised as a leading destination in the Gulf region for meetings, exhibitions and conferences. Far from the bustle of mass tourism, it offers travellers a business-oriented destination while still retaining outstanding leisure activities.

The spacious Doha Exhibitions Centre is the venue for many acclaimed regional and international trade fairs, including the well-attended annual Jewellery and Watches Exhibition and the Doha Trade Fair. In addition to this spacious complex, two new conference centres are scheduled to open soon, adding nearly 90,000sq m of exhibition space to the capital’s capacity.

The Qatar National Convention Centre is scheduled to open in 2011, and will feature a 2,500 seat auditorium, a 500 seat theatre and a multi-purpose hall for conferences. Located in Doha’s Education City, a hub for education, science and research, it will also create 40,000sq m of exhibition space to meet the demands of global conference and exhibition organisers.

Another forthcoming first class exhibition venue is the Doha Convention Centre and Tower in the city centre, scheduled to open in 2012. The project’s tower will reach over 100 floors, providing a new icon for Doha’s skyline, while the convention centre will provide 45,000sq m of showcase space.

Additionally, many of the world’s top luxury hotels are represented in Qatar. To meet forecasted demand, hotel capacity will increase 400 percent to over 29,000 luxury rooms and apartments by 2012. Every five and four star hotel in Qatar is equipped with conference facilities, and a vast number of luxurious spas, resort amenities and exceptional dining experiences – steeped in Arabian tradition – offer a quiet and relaxing respite from the charged activities of the day.

A kaleidoscope of events
There has never been a better year to visit Qatar. The calendar is packed with world-class cultural attractions, international sporting events and exciting activities for the whole family.

Inspiring a new generation of filmmakers in the Gulf region, the Doha Tribeca Film Festival premiered in October 2009 and featured a myriad of films, many written or directed by Middle Eastern filmmakers. The Waqif Art Centre in the centre of the authentic Souq Waqif (literally, ‘standing market’), also adds to the cultural attractions in Doha as a venue for many local and regional art exhibitions.

For sports enthusiasts, Qatar is host to more than 100 sporting events, including many world championships.

Fixtures include the Sony Ericsson WTA and Qatar ExxonMobil Open tennis championships, the Commericalbank Qatar Masters golf tournament, the Moto GrandPrix and the Formula One powerboat racing world championship. This past November, Doha hosted the friendly soccer match between England and Brazil. Qatar is also looking forward to hosting the 2011 Asian Cup, and has recently announced its bid to host the 2022 World Cup.

But no trip to Qatar would be complete without experiencing the country’s year-round attractions. The capital city of Doha is home to the Museum of Islamic Art, designed by Pritzker-prize winning architect I.M.Pei and boasting one of the largest and finest collections of pieces from one of the world’s great civilisations. For visitors seeking a genuinely Arabian experience, the vast deserts of Qatar promise adventure through camel back safaris, exhilarating dune rides and wonderful nights beneath the stars. Shoppers and explorers are encouraged to discover local treasures by losing themselves in the authentically preserved Arabian souqs.

Upscale shopping in the city’s contemporary shopping malls, and along the piazza in the newly opened Pearl-Qatar development, offer a wide range of well-known luxury brands and goods in a relaxing and welcoming atmosphere.

Capital connections
Aside from the myriad attractions and activities, Qatar has developed a solid infrastructure to support progress and innovation, becoming known not only as a destination for travellers, but also as a centre for business, education and research. Qatar is home to Education City, an impressive undertaking which hosts six world-class universities, all branch campuses of prestigious American institutions. The Qatar Science and Technology Park is a local home for technology-based companies from around the world and an incubator for start-up enterprises. Known as the founder of free speech in the Middle East, Qatar is home to Al Jazeera, the first independent Arabic news channel in the world.

Qatar has also become a popular destination for cruise ship passengers. With easier visa procedures for visitors by sea, Doha has quickly become an ideal stop on any cruising itinerary. As a part of investment in the tourism infrastructure, Qatar is building the New Doha Port, the first phase of which is expected to open in 2014.

Building its future on its seafaring heritage, Doha is expanding as an easily accessible coastal city while remaining a sought-after destination for cruise ship passengers.

Although the State of Qatar is emerging as a global leader in industry and tourism, the country is still a work in progress. Dohaland, a subsidiary of the Qatar Foundation, has launched the Heart of Doha real estate development project, aimed at reviving Qatari, Arab and Islamic architecture and strengthening the Islamic cultural renaissance that Qatar is currently leading. Qatar’s largest single real estate development, Lusail, is currently underway: when complete it will cover over 35sq km and will accommodate up to 200,000 people.

In the next years the New Doha International Airport will open, welcoming an expected 50m passengers. Qatar has recently embarked on a railway initiative, including a 33km light rail system that will serve Lusail City and connect it with Doha. Railway planning is also underway in Education City, West Bay and the industrial zone areas. A study has been launched on how to integrate these urban train plans with a proposed national railway system and the GCC international railway. A new commercial port is also being developed for Doha. Spread along 20km of coast outside the city’s boundaries, it will be able to accommodate the increasing number of ships coming to port in Qatar while relieving traffic congestion in the city.

Always planning for the future, the State of Qatar has dedicated its substantial resources and energy to progressive and innovative development ideas and tools, making a perfect destination for business travellers who increasingly need to think radically.