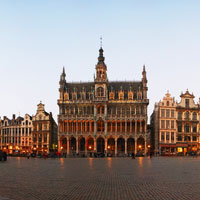 The city’s name is derived from an old Dutch word, “broucsella”, which means “marsh home” or “home consisting of one room, in the marsh.” Along with its rather quaint name, Brussels has an equally charming body of local traditions.

One such tradition is the House of Toone, a theatre of marionette puppets. Originally in the Marolles area, it now holds shows that introduce visitors to the local languages and customs in a 1696 estaminet just steps away from the Grand Place.

Another popular tradition in Brussels is the Ommegang, which means “walking around.” The tradition began in the 14th century as a religious processional. It occurs each July and is held in memory of Charles V’s Joyous Entry into Brussels in 1549. The parade is very colourful, including floats, giant puppets, and groups dressed in medieval costumes.
Still another interesting custom is the Meyboom or “tree of May” celebration. As part of this ancient festivity, a young beech tree is paraded through the city and planted among joyful music and giant puppets.

There is a language border that more or less separates the country of Belgium into two entities. The northern part of Belgium is Dutch speaking, where as the southern half is French speaking. There are parts of both sides that speak both languages, and the city of Brussels is the same way. Brussels is a bilingual city which allows for a more diverse culture and the ease of entry for a larger group of people.

Marvellous eccentricity
Brussels also has many cultural attractions and landmarks, such as Grand Place, the Royal Museums of Fine Arts of Belgium, and the Royal Palace of Belgium. Belgium is also the birthplace of many comic characters, like the Smurfs, Largo Winch, Tintin, and Lucky Luke, so there are many murals and frescos throughout the city honouring these characters.

Indeed, the comic spirit of the inhabitants of Brussels is evident in its most famous statue. A quirky little bronze statue called Manneken Pis or Jeanneke Pis. It depicts a little boy urinating into the basin of a fountain. Legend has it that this modest little fellow once saved the city’s inhabitants from an invading foreign power by urinating on explosive charges set on the city walls. There are however numerous stories regarding the origins of the statue – which one you’re told largely depends on the tour guide. As if all this hype surrounding the pint-sized hero isn’t enough, the statue has its very own wardrobe of more than 100 costumes, of which a different one is donned several times a week and in accordance with special events.

Historic town centre
One of the most popular attractions in Brussels is the Grand-Place. This is thought to be one of the most breathtaking squares in the world. It is surrounded by old buildings such as the Hotel de Ville. The origins of the Grand-Place date back to the 12th century when a market was developed to be linked to important commercial roads to the Rhineland and Flanders. From the 14th Century onwards the square played an important role in the rise of local merchants, tradesmen and guilds, many of whom left behind exquisite examples of their craft symbols gilded on to surrounding buildings. The square is also flanked by the medieval Brussels City Hall, built between 1401 and 1455. Towering 96 metres into the sky, a statue of St Michael slaying a demon sits atop to form one of the most iconic and beautiful buildings in the city.

If you are in Brussels to soak up the culture this is a must see. The Royal Museum of Fine Arts is the best collection of art in Belgium, and thousands of people from all over travel to the museum on a yearly basis.

Exploring Brussels’ many nooks and crannies is an even more pleasurable experience thanks to a wealth of traditional and contemporary bars and restaurants. Indulge with a famous crepe and devilish Belgian chocolate, or simply relax with a bowl of moules frittes and mug of traditional beer.

Getting there and around
As you might expect from a city that’s dubbed “capital of Europe”, Brussels enjoys strong transport links – not only within Belgium and Europe but throughout the globe. Brussels has strong rail links with other European countries and the city has an efficient internal public transport system that utilises underground, trains, trams and buses.

Getting there by air
Brussels most prolific airport is “Brussels International Airport” (located in Zaventem) and is 13km away from Brussels city centre. The majority of airlines fly to this destination and as you would expect it has the features & facilities you would expect from a major international airport. From Brussels International, you can reach your ultimate destination by train, taxi or bus.

Getting there by train
The Eurostar operates a full service to Bruxelles Midi, and the Thalys Express also runs between Brussels and destinations including Paris, Amsterdam, The Hague and Cologne.

Getting around – trams, trains, buses & taxis
It’s fairly easy and inexpensive to move about within Brussels. A single ticket can be purchased for under two euros and can be used anywhere on the STIB network (metros, trams and buses). The network is quite comprehensive so it’s fairly easy to hop from one location of Brussels to another. Don’t forget to stamp your ticket – if you’re caught without a valid ticket there are hefty fines of up to 55 Euros imposed. There are various options for discounted tickets depending on your length of stay – for around 30 Euros you can grab a “Brussels Card” which allows unlimited public transport travel for three days as well as free admission to various landmarks.

Public transport in Brussels is made up of a comprehensive yet easy to navigate train system that’s well supported by a further network of trams and buses.

The tram network is a good way of navigating around the city centre. Trams are quite frequent and not only meander through Brussels town centre but also reach much of the outer city and suburban areas.