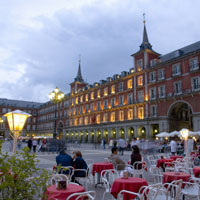 Madrilenos, the city’s dwellers, are certainly not coy when they say, “desde Madrid al Cielo” – from Madrid, the only place left to go is heaven. Although this may seem a tad bold, as the highest capital in Europe (646m above sea level), it is at least theoretically the nearest European city to the pearly gates.

Perhaps of more interest to the European traveller looking for some sunshine is that Madrid is also the sunniest capital in Europe: average annual temperatures in the shade hover at 13°C.

For art lovers, there are a staggering 73 museums dotted around its labyrinthine streets. The mix includes Spain’s three greatest museums, down the Paseo del Arte: the Thyssen-Bornemisza, home to Renaissance painter Domenico Ghirlandaio’s exquisite Portrait of Giovanna Tornabuoni; the Prado, famed for its El Greco, Titian, Velazquez and Rubens masterpieces; and the Reina Sofia, where Picasso’s Guernica and other contemporary artworks can be seen.

Gran Via, Madrid’s most famous street, is lined with typically extravagant 20th century architecture; this year it celebrates its centenary, so there’s never been a better time visit. The four star Emperado Hotel on Gran Via offers views of the nearby Royal Palace’s 18th century architectural opulence and the Aludena Cathedral from its rooftop swimming pool.

Out and about
Nightlife, which generally starts to buzz after 10pm, comprises clubs, bars, restaurants and an excellent range of tapas bars. Two tapas bars to try are the Casa Lucio in the nearby La Latina area, and Casa Labra at Calle Tetuan 12. The former is famous for its celebrity and royal diners as well as for its traditional Madrileño dishes. The latter is probably one of the oldest in the city and is where the Socialist party was founded in 1860. Enjoy a cañas (small glass of beer) with cod croquettes and other fried morsels.

First time visitors should visit the Botin Restaurant in Calle Cuchilleros – the world’s oldest restaurant and one Hemingway called his favourite. It dates back to 1725 and is where Goya is supposed to have worked before becoming an artist. Four rickety staircases lead the way to wood-beamed rooms, where diners tuck into their speciality dishes of cochinillo asado (roast suckling pig) and cordero asada (roast lamb) cooked in antique cast-iron ovens.

Bullfighting is the world’s oldest sport and it takes place during Spain’s National Fiesta at La Plaza de Toros de Las Ventas del Espíritu Santo during May and June. If you can stomach it join a million or so Spaniards as they watch a bullfight and cheer on the matadors.

It is impossible to talk of the former Moorish stronghold without mentioning its illustrious football club, Real Madrid. Their 80,354 seat stadium Estadio Santiago Bernabéu is at South Paseo de la Castellana. A hefty €14 buys a guided tour but it does take in their overflowing trophy cabinet.

It’s worth remembering that this is the city where Victoria Beckham flashed her credit cards for the best part of four years when David was playing for Real Madrid. The best place for the former (the latter arguably taking more commitment than a weekend jaunt) is Plaza Mayor, which bulges with a range of shops. The famous El Corte Ingles department store is at Puerta Del Sol but for high fashion it has to be the Salamanca area.

This year capes made a comeback as a fashion item, with even Victoria Beckham designing one – perhaps with inspiration from Capas Seseña at Calle de la Cruz 23, the only shop in the world that sells capes and only capes.
Fashionable shopping, sporting and a night life to stay up for, Madrid offers a fine city break that should make Barcelona sit up and take note.