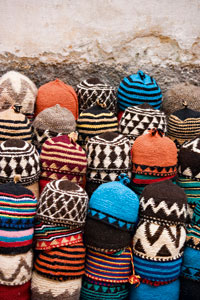 t took two and a half hours to reach the Berber village of Sidi Kaouki and by the time we got there it was dark. There were no street lights (and, indeed, no streets, other than the main road) and a crescent moon added little by way of illumination.

The joy of arriving at night, of course, is waking to a new world the next morning – and in this respect Sidi Kaouki was a bit of a disappointment: stones, great and small, as far as the eye could see. No trees, no grass, just a few scrubby bushes, lots of low stone walls demarcating plots of stone-flecked earth and a few tumbled-down stone dwellings. It had the air of a vast archaeological site in mid-excavation.

And then something strange happened. It was as if someone had adjusted the focus. Shapes began to form. There was a small boy with three cows, flicking his stick at their bony rumps; an older boy was leading two camels, delicately picking their way down a narrow lane. There were horses and chickens; a dog trotted by with its tail in the air. I turned and there was the beach: a vast expanse of ginger sand pounded by the Atlantic. This landscape wasn’t barren at all, it was full of life; and beautiful, in a stark sort of way.

Ninety-three miles north of Agadir and 17 miles south of Essaouira, Sidi Kaouki is named after a 19th-century marabout, a wandering holy man or teacher, and his dilapidated shrine by the sea still attracts pilgrims. More recently, the cast and crew of Sex and the City descended on the beach to shoot a scene for the second SATC movie (the beach was doubling as Dubai). But if Sidi Kaouki is known to outsiders at all, it’s for its near-perfect conditions – together with Essaouira and nearby Cap Sim – for board and kite surfing (which, by the way, is a clue to the climate here: warm and windy year-round).

But watersports aside, the village also makes a great base for combining the peace and quiet of a traditional Moroccan village with the chic souk-and-café culture of Essaouira, just along the coast. And surprisingly for such a tiny village, there is plenty of accommodation, including the luxurious Rebali Riads (five riads with communal pool, hammam, gardens and restaurant), which opened last year and where we were staying. In fact, so lovely is Rebali that we could have happily spent our » days sunbathing, reading and being scrubbed down in the hamman. But we were there to see something of Morocco, so after a breakfast of pancakes and honey, we set off for Essaouira.

On the way we stopped at Diabat, home of the Jimi Hendrix Café. Hendrix visited the area in 1969, though he did not, as legend suggests, write Castles Made of Sand about the old fort half-buried in the dunes here, nor did he ever own the land on which the café stands (or, indeed, form a local commune with Timothy Leary, buy a hotel in Essaouira or try to adopt a Moroccan boy). But Diabat is proud of its Hendrix connection and it seemed churlish to quibble.

A mile or two farther on stands Essaouira. With its wide boulevards, palm trees and mix of Moroccan and French architecture, it looks like a blustery version of the Côte d’Azur. Indeed, much of the city was rebuilt in the 18th century by a Frenchman, Théodore Cornut (with help from other architects, including an English renegade responsible for the harbour).

Its name was changed from Mogador to Souira, “The Small Fortress”, then to Es-Saouira, “The Beautifully Designed”. These days, it’s known variously as La Ville du Vent (every day’s a bad hair day in Essaouira), The Blue City and The City of Cats. Behind the old city walls is the medina – a Unesco World Heritage Site – where things became more North African. A warren of narrow cobbled streets crammed with tiny shops, it’s a more compact, more manageable version of the medina in Marrakesh. The hassle factor is low and good-humoured, and a firm “no thank you” generally does the trick.

Fortified by several glasses of sweet mint tea (known as Berber whiskey), we bargained for Thuya wood magic boxes, silk scarves and silver jewellery. A Berber with a magnificent blue turban invited us into his shop to see his jewellery. We said we’d come back “maybe later”. “People who say ‘maybe later’ never come back,” he said reproachfully.

We made our way down to the harbour, where a carpet of blue fishing boats almost completely obscured the water. It was hotter here and we held our breath as we passed gulls picking over the stinking scraps of the day’s catch. Suddenly we found ourselves longing for some peace and quiet. So we gave the city’s 16th-century fort a miss and made our way back along the beachfront to Sidi Kaouki for a swim, a treatment in the hammam, and an early dinner.

There is a dining area at Rebali but most guests prefer to eat in their own riad. There is no choice, though guests are consulted about likes and dislikes earlier in the day, and it is very good value at £12 a head. That night it was lamb tagine (and a bottle of Moroccan rosé), which we ate to the chirruping of crickets and the rumbling of the sea as it pounded the beach. When we’d finished, we climbed the stairs to our roof terrace and had a nightcap under a vast black sky studded with stars.

Sooner or later every visitor to Morocco has to get on a camel. It’s practically the law. The day of our camel trek dawned bright and breezy and our camels, we were informed, were ready for us. Getting on is the second most difficult bit. Staying on while the camel jerks to its feet is even harder. But after that it’s a piece of cake and there we were – sailing up the empty beach, pretending to be noble nomads (in my case, the illusion slightly spoiled by the sarong from the swanky Cotton Club in Mustique tied around my head).

Rebali had arranged for us to have lunch in a fisherman’s hut, a delicious goat tagine cooked by one of the fishermen. Cooking for tourists is, no doubt, a useful sideline: it’s easy to forget, as we bargain for trinkets and gleefully note how cheap everything is, what a poor country this is, particularly in rural areas. Electricity only reached Sidi Kaouki in 2006 and water still has to be collected from the village well (most of the hotels and restaurants have their own wells, as well as generators, an insurance against the frequent power cuts).

As our camels returned to Sidi Kaouki, we passed a little restaurant right on the beach, hung with shell mobiles and furnished in decorative Moroccan style. Its owner stood outside, grinning and brandishing a couple of plump fish. His restaurant had no name, he said proudly, and no address. It had no customers either. Then eight or nine people just seemed to materialise out of the haze. Where had everyone come from? Someone had readjusted that focus again.
©Telegraph Media Group, 2011